Hillary Clinton’s memoir, “What Happened,” can teach us about the power of vulnerability

I can only imagine Hillary Clinton’s frustration and devastation when she realized the election that could’ve culminated in a celebration under the symbolic glass ceiling of New York’s Javits Center would be moved to the closed-off interior of Wyndham New Yorker Hotel, where she would concede.

In her recently released and highly anticipated memoir What Happened, HillaryClinton delves into the intricacies of the 2016 election and its unexpected aftermath. She literally asks herself (and her readers), “How did this happen?” Clinton details the moment when she had to concede to Donald Trump, how she struggled to contain her emotions when she apologized to President Obama for disappointing him. Still, she picked herself up and gave a concession speech that was full of hope, encouraging Americans to keep an open mind about the new President and reassuring women and girls everywhere that her loss has no bearing on the power they wield.

And she provides that same motivation in her new book.

Regardless of our political affiliations and our personal views of Clinton, I think it’s safe to agree that she was deeply scrutinized — more so than her opponents —because of her gender and her extensive background in politics, and how those two things relate. 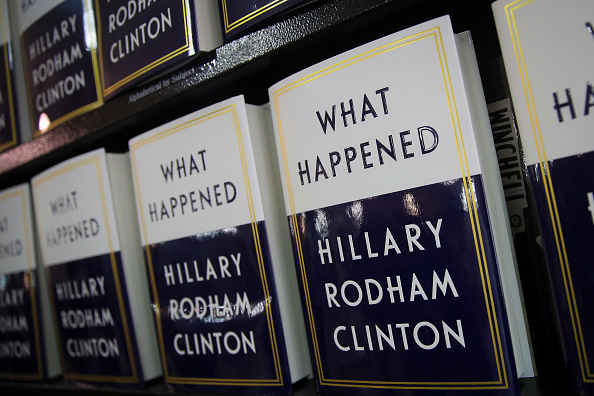 Clinton often appeared as a no-nonsense woman in the public eye, always holding her cards close to her chest. She had to be if she wanted to be taken seriously — first as a student in law school, next as First Lady, then as U.S. Senator, later as Secretary of State, and, finally, as the first female presidential nominee for a major political party.

Women are forced to constantly be cognizant of their behavior and mannerisms in the workplace. If they show vulnerability, people around them assume they’re too emotional to take on important responsibilities. If they act too tough, they’re labeled as being manipulative, bossy, mean.

But in her memoir, she lays it all on the table, reclaiming her vulnerability as a woman in a way that feels deeply empowering.

Vulnerability is often equated with weakness, especially for women — but by finally expressing her anger and pain over the outcome of the election, she has turned her vulnerability into a source of strength. Not just for herself, but for others too.

Clinton’s candor about her experiences on the field is resonant, demonstrating that sexism and gender bias doesn’t vanish with power. She owns up to a lot of the mistakes she made during the election, from apologizing for her use of the phrase “basket of deplorables,” to admitting it was foolish to use a private server for her government emails, and more in between.

"What makes me such a lightning rod for fury?" she asks, befuddled about why she's damned for doing the same things her male counterparts do.

Instead of repressing these memories and experiences, she tackles them head-on. Throughout the book, Clinton replays the critiques, double standards, and insults hurled at her, all while the wounds are still fresh. She describes how hurtful it was to hear people taunting her appearance and her “shrill voice.” She discusses how she has struggled to deal with the fact that there will be some people who simply don’t like her — and there’s nothing she can do about it.

In a sense, Clinton creates a space in this book where women can be assertive without sacrificing their emotions.

Throughout the memoir and on her press tour, she admits to being deeply hurt after losing an election she thought she was surely going to win; she admits that she wished to hide away in her home for the foreseeable future. But neither of those statements make her any less of a strong figure because nothing can take away her accomplishments.

Loss is something we’ve all endured, though on a much smaller scale than a presidential election, of course. Whether it’s not getting into college, losing a job, or going through a terrible breakup, we’ve all felt that deep despondency. It feels like the end of the world. We may know, somewhere in the back of our minds, that there is light at the end of the tunnel — and Clinton’s memoir reaffirms that for us. Her writing personifies the resilience needed to put yourself back together and move forward when all you want to do is forget.

She was so close to shattering the glass ceiling to become the first female president of the United States, and ended up losing at the eleventh hour. It’s easy to give up when constantly faced with roadblocks, but incredibly difficult to gather the strength to keep fighting. But that’s what Clinton is doing, not just in real life, but through her memoir as well. While she may never run for office again, according to her interview with CBS Sunday Morning, Clinton is enthusiastic about affecting change in other ways, refusing to pay heed to people who want her to go away.

Wherever we fall on the political spectrum, Hillary Clinton’s perseverance ought to strike a chord in everyone to some degree. She shows us that, while it’s okay to mourn the loss of what could’ve been and to cry over failure, it’s necessary to keep our eyes on the future. Clinton channeled her anger into Onward Together, a nonprofit organization that encourages people to be more engaged with issues they’re passionate about.

Now it’s up to us to channel our energy into something we’re passionate about, too.