Hillary Clinton’s powerful message to young women is the most shared U.S. tweet of 2016

It’s no secret that Donald Trump loves Twitter — so he’ll undoubtedly be disappointed to learn that a Hillary Clinton quote is the most shared U.S. tweet of 2016. The morning after her shocking loss to Trump, Clinton delivered a powerful concession speech that placed a strong focus on empowering young girls and women. One quote in particular struck a major chord with millions of devastated women who desperately needed encouragement as we struggled to accept the reality that Clinton, the most qualified presidential candidate in history, will not become the first woman president.

“To all of the little girls who are watching this, never doubt that you are valuable and powerful and deserving of every chance and opportunity in the world to pursue and achieve your own dreams," Clinton stated as she concluded her speech. When her staff posted the quote to Twitter, thousands of people immediately shared the tweet.

Although winning the Twitter game was never Clinton’s priority, the fact that this is the most shared tweet of 2016 reinforces the comforting knowledge that she’s the people’s president — as of the most recent tally, Clinton leads the popular vote by over 2.5 million votes.

The fact that this particular quote has taken off in such a major way is also encouraging — it proves that women have not given up. Although Clinton's loss is heartbreaking, we remain committed to teaching young girls that they are worthy of every opportunity in the world — including the presidency. 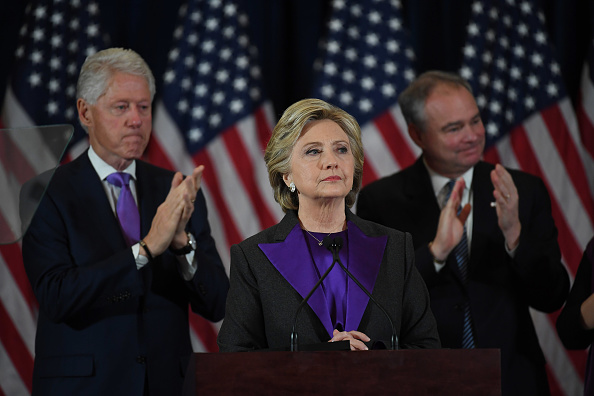 Although Clinton didn’t win the White House, the results of the popular vote and the fact that so many people have embraced her message to young girls (there are currently so many Etsy prints of this quote that we simply can’t decide which one to buy), proves that more Americans believe that Love Trumps Hate.

As Trump prepares to move to 1600 Pennsylvania Avenue, it’s so important to remember that Clinton made a powerful, historical impact on young girls and women all over the country — and we owe her a debt of gratitude for showing us what true strength, work ethic, grace, and integrity look like.