Here’s yet another reminder of the darker side of fame. On Saturday, February 22nd, Hilary Duff posted an Instagram video of her confronting a paparazzo who was photographing children playing football. Despite Duff’s request for him to leave, the paparazzo wouldn’t stand down—but so many of Duff’s followers, including celebrity moms, commented in support of Duff’s stand to protect the children’s privacy.

In the video, Duff requests for a paparazzo, who stood just outside the football field where her 7-year-old son, Luca, and other kids were playing, to stop photographing the children.

The video continues on for another minute, with Duff asking, “human to human, as a mother,” to take pictures elsewhere. The man insists that what he’s doing is “legal,” that he was entitled to practice his photography in public, and accuses Duff of “paranoia.” Ultimately, Duff says, “I’ll just post this to my 15 million followers on Instagram and let people know how creepy it is that this is what you’re choosing to do on your Saturday morning.” The video ends with the man covering Duff’s camera lens with his hand.

The Younger actor posted the video with the caption “Paparazzi shooting KIDS. Go “practice” your photography on ADULTS! Creep! Laws need to change! This is stalking minors! Disgusting!”

Soon after, other celebrity parents came out in support of Duff and her call for legal change. 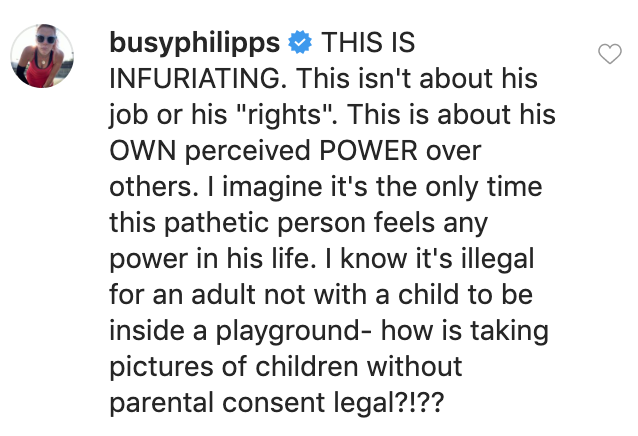 “This video should ignite a huge conversation around paparazzi laws and what is deemed “ok, she wrote. “The system chooses to overlook certain aspects of privacy for monetary gain. The bottom line is this industry should not be allowed to make money off of children.

Some of her followers accused Duff of publicly shaming the photographer, and supported his legal right to take pictures in a public area. (“You humiliated a man who wasn’t really doing anything THAT wrong,” one commenter said.)