Over the weekend, Gwyneth Paltrow hosted the first ever In Goop Health summit in New York City, where hundreds of women bought tickets to see Paltrow in person, attend panel discussions on female empowerment and spirituality, eat charcoal ice cream, get a non-toxic manicure, and do some pilates. It sounds like a great self-care day, except that there’s a major problem with Gwyneth Paltrow’s Goop summits and many of the “wellness” ideas she promotes through her lifestyle brand.

Goop told HelloGiggles in a statement that they couldn’t speak about the summit on the record when we asked for a comment about the criticisms of the panelists at the events.

Paltrow, or “GP” as she was reportedly called throughout the day, threw a similar event in Los Angeles last year, so there are likely many more In Goop Health summits on the way. This weekend, attendees paid either $650 or $2,000 for varying levels of access and perks. With the respective passes, you could attend a certain amount of panels and free spa treatments, graze on unlimited avocado toast and B12 injections, and walk home with either a backpack or Tumi suitcase (depending on the ticket price you paid) full of “Goop surprises.” 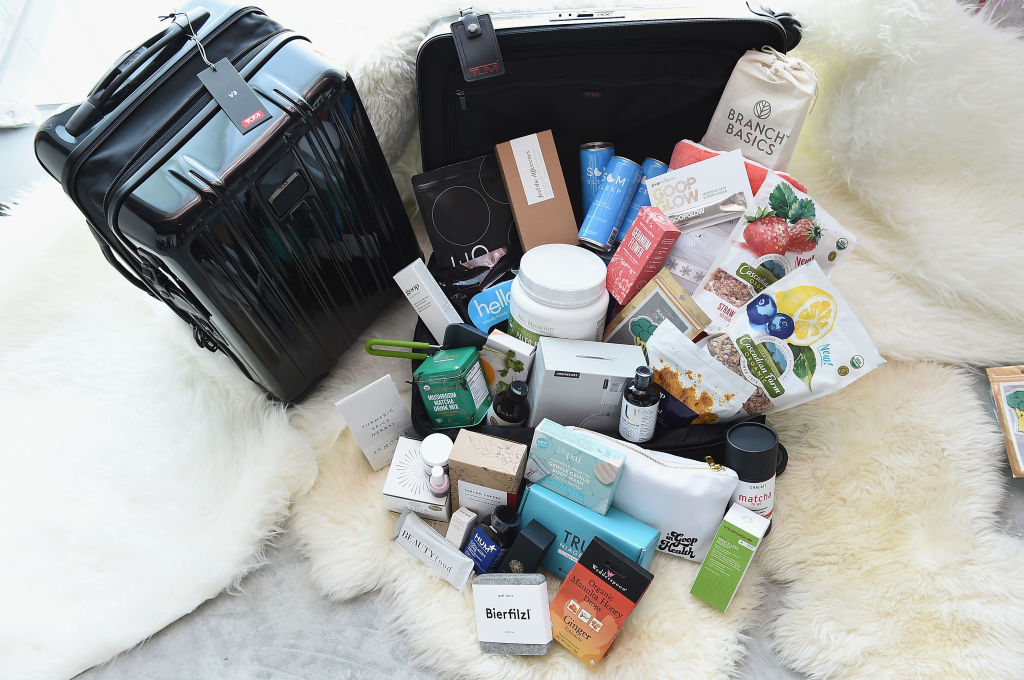 According to People, Paltrow gave a welcome talk to her “Goopies” and explained that this summit was for people who “believe in numbers and science” but also enjoy the “unquantifiable.”  “I think we like the in-between of data and the unexplained. There isn’t always a double-blind study that can explain it,” she said.

Actually, though, there often is data and research to back up most health practices. Instead of giving a platform to actual doctors and experts to talk about the data, the issues, and even the problems within the medical community — like overprescribing or gender and racial biases that are a barrier to quality care — Paltrow gives her huge, national platform to doctors and “experts” who don’t base their practices in science or evidence at all. It’s not that they don’t have the double-blind studies — they’re straight up ignoring them, according to experts like Dr. Jennifer Gunter, an OBGYN and critic of Goop’s “medical advice.” But it’s more than just selling jade eggs (which are supposedly very bad for your vaginal health, yet sold by Goop) or promoting a fasting regimen as a diet, though those are all troublesome.

The problem with Goop’s approach is that there’s a big difference between your “wellness” and your “health.” Your health is based on biology and other scientific data, whereas your “wellness” can be anything you want it to be. Like, a wellness expert can recommend any kind of diet or exercise plan they like. A health expert will be able to talk to you about what those choices do for your body and why. 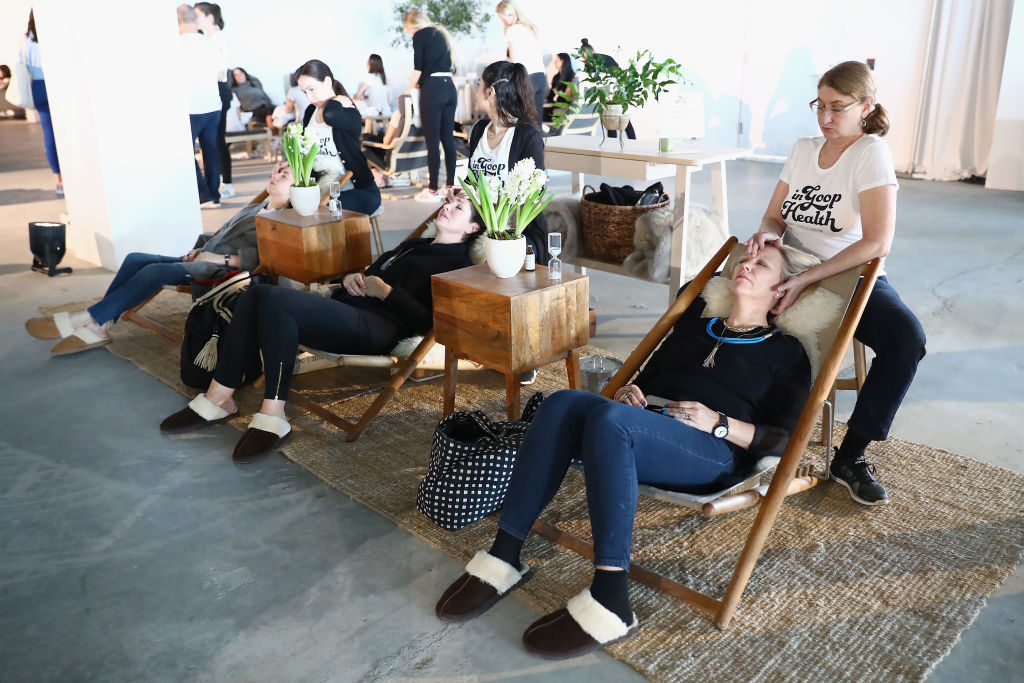 While some of her guests were badass — like former Teen Vogue editor Elaine Welteroth, author Gillian Flynn, Drew Barrymore, Chelsea Handler, and Laura Linney, who were on a panel about female empowerment and #MeToo, or relationship expert Terry Real, who did some live couple’s therapy — others are mostly considered by medical professionals to be…less-than-valid sources of health information. It’s one thing to share your ideas about the universe, the afterlife, and what loving yourself can do for your life. We’re here for that.

It’s another thing to talk about those things having an affect on serious diseases like cancer, depression, or other conditions women face every single day.

Confidence doesn’t get rid of acne and supplements aren’t a substitute for chemotherapy. (In fact, there’s evidence that supplements are linked to some cancers, according to the American Cancer Society.)

One of the experts at the summit this weekend included Dr. Kelly Brogan, who believes in a medication free life, which is something that some people might strive for if they’re already really healthy. It gets trickier when you have conditions that need treating. She also believes that HIV/AIDS treatment is a Big Pharma scam and that genetically modified foods causes clinical depression, both of which are dangerous ideas to spread. In fact, we know that HIV/AIDS treatment greatly improves patient health and can make the virus non-transmittable, and that depression is linked to hormones and other factors in a person’s life, not because they can’t afford to eat organic food.

Another panelist at the summit this weekend was Eben Alexander, whose neurologist credentials were brought into question after he wrote a book about the afterlife and his belief that fear is really the root of all of our diseases. Dr. Catherine Birndorf, MD spoke about postpartum depression. Emily Laurence from WellAndGood.com reported:

"It’s normal to have thoughts about killing your kid, she said, giving examples of putting your baby in the microwave or tossing him or her over a guardrail. Of course, she was quick to add that these dark thoughts don’t actually mean you want to harm your child —not at all. “It just means you’re anxious!"

While we’re all about reducing the stigma around postpartum depression, women should be told to seek psychological help, and possibly get a prescription to treat her depression and anxiety. It’s a lot more than just being anxious sometimes. If a new mother is despairing and thinking about “putting a baby in a microwave,” a little yoga and some more B12 injections might not be strong enough to do the trick. Postpartum mental health struggles are so normal that we now know how to help women spot the signs and treat them — even if some of the other Goop panelists in attendance don’t believe that depression deserves medicine.

There was also Dr. Sara Gottfried, an OB/GYN who sells supplements, which is not considered ethical or good practice. There was Dr. Taz Bjatia, a pediatrician who has appeared on Dr. Oz’s show, which has a reputation for spreading medial falsehoods, and a whole host of medical professionals, who, as Gunter aptly points out, had books to sell.

Not only does some of the medical advice from Goop’s panelists about diet and mental health avoid facts, it also takes a certain amount of privilege to follow. 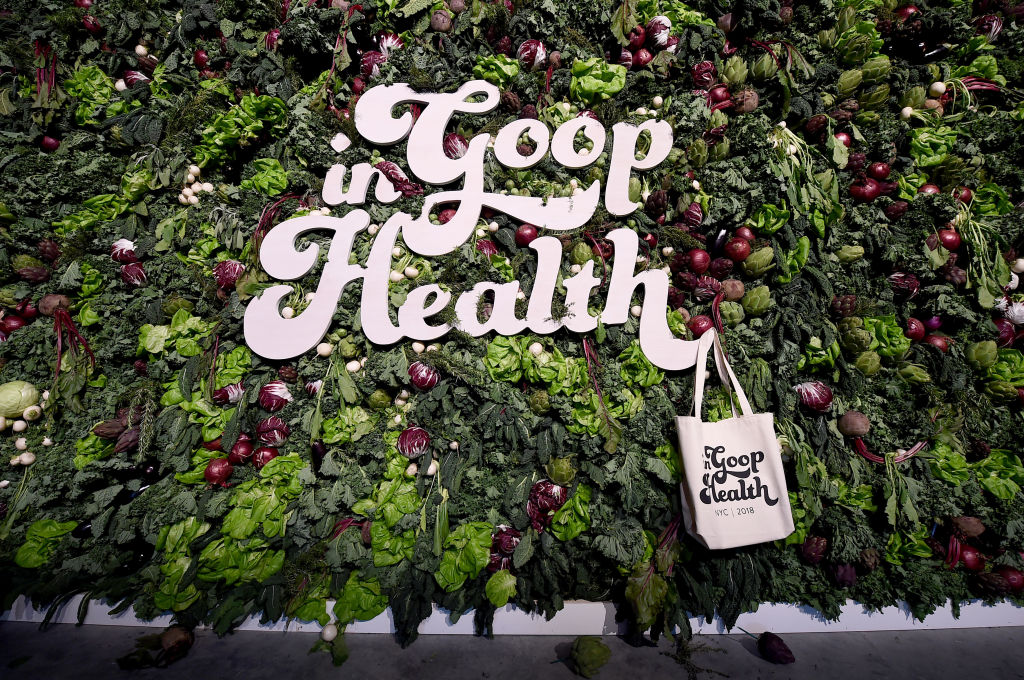 Really, the entire entry way of the summit was made of fresh, real produce, which is strikingly tone deaf, even for Goop. How many women out there forego eating healthy because the price of leafy greens is prohibitive? Not everyone has access to the Goop way of life, but it’s something, apparently, that we should all aspire to. Even if it’s expensive, fraudulent, and might hurt us along the way. (Goop declined to respond to HG’s request for comment about the fate of all that spinach.)

It’s up to everyone to make their own decisions about their health. But teaching people — especially women and especially women without $650 to spend on a summit — that supplements will prevent their cancers or that depression is just a state of mind, can be really dangerous. This isn’t about whether Ayurvedic methods of healing are better than Western antibiotics, but whether or not Goop cares about your health enough to include other medical data, or at least disclaimers that the practices and products they sell can do more harm than good, along with their recommendations. Because spreading dangerous misinformation, especially at those prices, is beyond unethical.