We all have those movies that make us feel all warm and fuzzy inside, movies that just GET us, movies that leave an imprint on our lives along the way. For many, A Little Princess is one such movie.

Though it’s been 21 years since the book-turned-movie was released, A Little Princess is the type of film that’s almost impossible to forget – no matter how much time has passed. While the actual movie itself may be exactly as we remember it, the actors have continued to grow and change, causing us to ask ourselves: What ever happened to the girl who played Sara, the Little Princess?

In real life, the actress’ name is Liesel Pritzker Simmons and plot twist: she’s basically a princess. Well, not technically, but she is an American heiress who has an interesting, memoir-worthy past.

After finishing A Little Princess, Liesel starred in the 1997 film Air Force One, in which she played Harrison Ford’s daughter. Forbes states that Harrison likened Liesel to Jodie Foster, explaining, “Liesel is just so real, it’s like a breath of fresh air.”

Once she graduated from Chicago’s New Trier High School and enrolled at Columbia University, Simmons hoped to continue her acting career. However, the trajectory of her life quickly changed when she and older brother Matthew decided to sue the Pritzker family and their father for $500 million. This all came about because Liesel’s father, Robert Pritzker, used his children’s trusts to invest in the family holding company. When the cousins on this side of the family later split the fortune, both Liesel and Matthew were unfairly left out of the equation.

Though Matthew and Liesel received $500 million payouts, they lost something else: their privacy. To avoid the public eye, Simmons then moved to Dharamshala, India, where she volunteered at a children’s nursery school and later worked to help heroin addicts using the healing power of yoga. During this time, Liesel realized, “Maybe I had something to offer – besides just my money.”

About four months later, Liesel returned to New York, where she did several things: decided not to pursue acting, started cooking school, returned to Columbia, and gave her mom $50 million to start an education foundation. She’s since been investing her funds in other projects with her husband Ian. Together, they travel the world looking for economic opportunities that will solve social and environmental challenges. 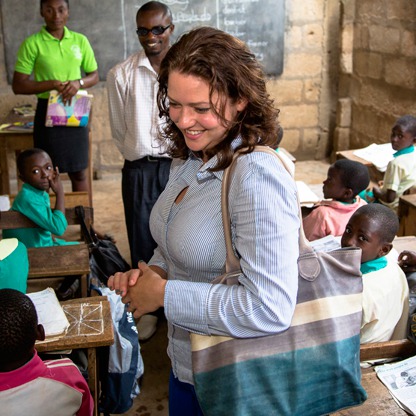 “I didn’t earn this money,” asserts Liesel. “And I’ll be damned if I’m going to screw it up!” (That’s definitely something the Little Princess would say and now our hearts are happy.)