I found HelloGiggles in a hopeless place.

That is to say, I found HelloGiggles when I was in a very hopeless place. Though I had maintained a personal blog for quite some time, I had never been “published” in print or online before. I came across HelloGiggles because I am a huge Zooey Deschanel fan and, as I read the pieces on the site, I was inspired to submit because I felt like it was very like a place I (and my writing) belonged.

The first thing I ever remember reading on HelloGiggles was Anne T. Donahue’s “Old Lady Movie Night,” a column that kept me laughing — literally laughing out loud — each week. In my personal life, I was going through the hardest breakup I’ve ever been through (still!) and HelloGiggles was my most solid outlet. Not only did it make me laugh, it gave me hope. The combination of touching personal stories and genuinely funny interpretations of ’90s kid nostalgia made me feel very not alone at a time that I was, literally, very alone.

I ran a series on my personal blog called “Everything I Need to Know I Learned From,” a title inspired by Robert Fulghum’s All I Really Need to Know I Learned in Kindergarten, a book that my favorite middle school teacher introduced me to. I had written about hip-hop, royal weddings, Beyoncé, and The Simpsons. While reading HelloGiggles, I was inspired to submit my Simpsons column — it seemed like the perfect piece for the site. Not only was it a fit for the site, but the lovely editors asked me if I wanted my own column. I agreed, OF COURSE, and I have written an EINTKILF every single week since March of 2012. If I had known my future with HelloGiggles, I might have picked an easier acronym, but hey — it’s endearing, right?

HelloGiggles has given me a lot, and I’m not just tooting our horn because today is our anniversary. HelloGiggles introduced me to the writing world — even more so than my BA in English Lit. Because of HG, I broke into freelancing, which eventually morphed into my current career. I have made writing connections that have lasted for years and years. I have made friends with HelloGiggles contributors, both new and old, some of whom are people I have known for four whole years now. I dated someone I met on Twitter through HelloGiggles connections. I have used my column as therapy, as a way to connect to the people I love, and I have realized how much of myself I can find in a variety of movies and television programs — something that might sound silly, but has actually been really incredible for me.

I have received shoutouts from my favorite celebrities (most recently Gina Rodriguez, but in the past, Lisa Kudrow, Jason Alexander, Mindy Kaling, Candace Cameron Bure — Hank Azaria even follows me on Twitter because of HelloGiggles!) and more importantly, received hundreds of generous emails, tweets, and Facebook messages from people I have touched with my writing. 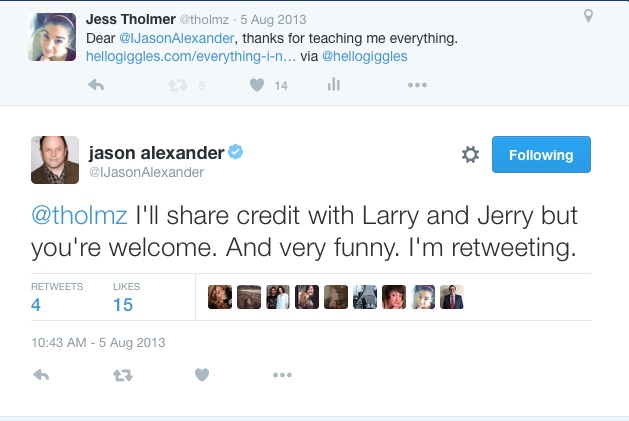 HelloGiggles has always felt like home. It saved me from the tragic heartbreak when I was 24, it introduced me to some of my literal best friends, and it has paved the way for my career and my future.