There are few horror movie plots that can rival the terror of facing our own capacity for selfishness head-on. It’s with this idea that Happy Death Day first took us on the journey of the mean-girl protagonist, Tree, as she relives a time-looping nightmare of her own murder. The movie was self-aware enough to give an overt nod to Groundhog Day, while unapologetically leveraging the time-bending plot device to create a compelling murder mystery with equal parts horror and heart. Naturally, as Tree uncovers the grim details of her murder, she also uncovers the ways loss has pushed her towards cruelty.

Now, Tree and her friends are back battling time in the sequel, Happy Death Day 2U, except this time around, Tree finds herself in a parallel universe where her boyfriend Carter is dating someone else, and threats of mass violence lurk around every corner.

Communicating Tree’s inner chaos of being trapped in a parallel universe required massive attention to detail, particularly when it came to costuming. Each outfit choice gave audiences another look into Tree’s level of distress, and in contrast, the ways those around her remained clueless.

Luckily, costume designer Whitney Anne Adams, who has worked on everything from period adaptation The Great Gatsby to the romantic Irreplaceable You, is well-versed in dressing characters across a wide range of genres and emotional states. Jumping on board for the chaos of Happy Death Day 2U was a natural step for Adams.

In celebration of the film’s recent release, we chatted with Adams about her approach to costuming a horror plot, how psychology plays into clothing, and how the actors connect to their costumes.

Warning: this post contains spoilers for the film Happy Death Day 2U.

HelloGiggles: Did you have a light bulb moment as a child or teen when you realized you wanted to become a costume designer?

Whitney Anne Adams: It sort of progressed for me. I was a jock in high school, so everything was focused differently. I did drama, but I was a horrible actor so I was like, well, this can’t be a way that I live my life. And then I was a really big cinefile, so I watched tons of movies growing up, especially with my family. We watched sci-fi, we watched everything, and the biggest influence for me was Moulin Rouge and that world and Catherine Martin’s brilliant designs. I watched that movie over and over again. That sparked something in me, then when I took Intro to Theater Design, it all sort of clicked into place from there. I was like, oh, this is what I need to do with my life. 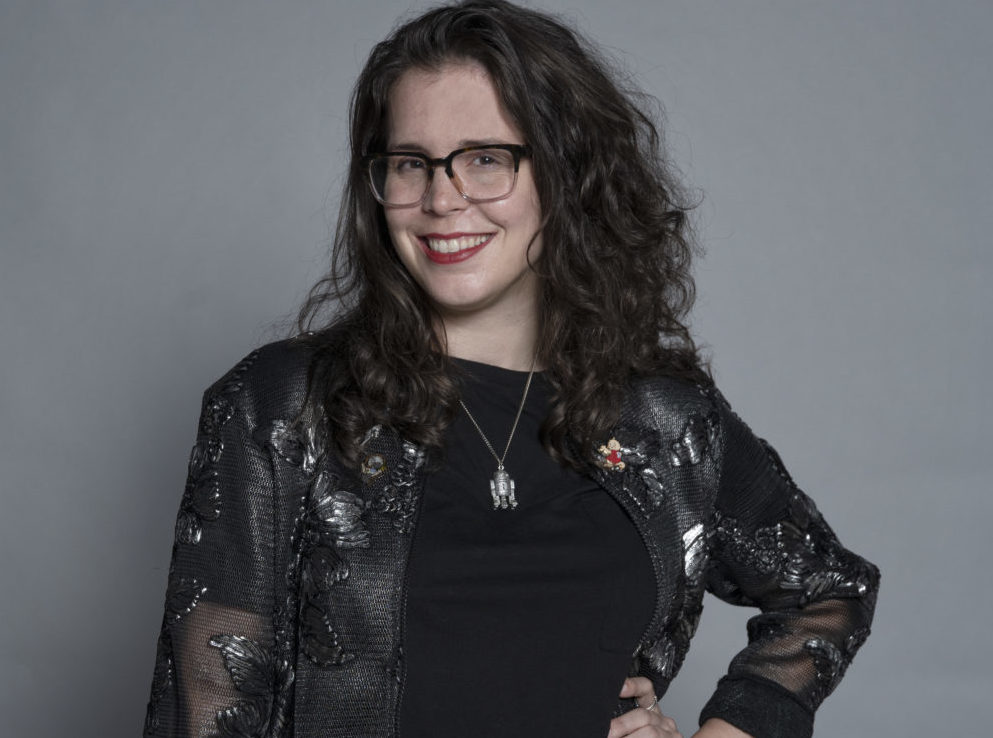 HelloGiggles: What was the element of costume design that you were most surprised to learn about?

WAA: I think for me, it’s how much of a psychologist you have to be. You have to really jump into the minds of these characters. You have to approach and experience these characters as real living beings, as three dimensional people before you think about what they put on their bodies. It’s so in-depth and connected to who these people are. So, you want to make sure you get it right and not make them two-dimensional; they need to feel like real people. 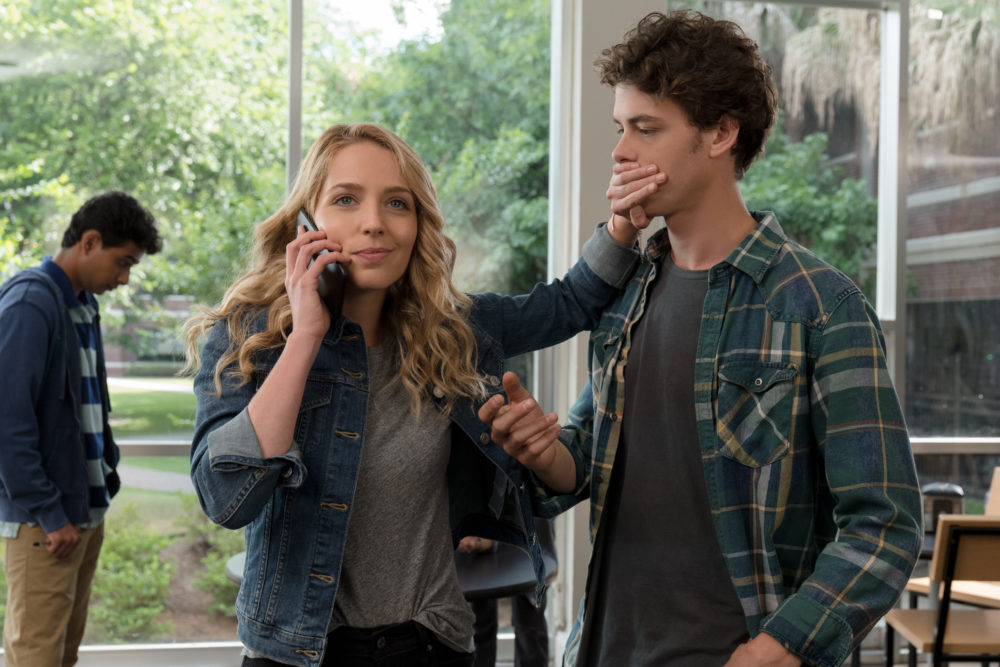 When you read the script for Happy Death Day 2U, did you immediately have a vision of how you wanted the characters to be costumed?

WAA: Definitely. I didn’t do the first movie. I saw it in the theater. I absolutely loved it, it was right up my alley, I’m obsessed with sci-fi and travel, and I loved all these characters. And there was so much room for them to grow, especially Tree. Then reading the script, it’s so brilliant, it went such a different direction than I ever would have guessed. And there were so many repeat days.

Chris [Landon, the director] and I had to decide from the very beginning, is Tree going to be in the same outfit we saw her in the first movie the entire film? Like all of us, she would want to wear something else after wearing the same clothes for 11 days. I think we all can relate to the fact that if we’re not wearing the right clothes, and if we don’t feel good in what we’re wearing, we don’t feel as confident with everything that’s going on in our lives. I think that was a main component.

So, reading the script, I started seeing different places to show who Tree is, especially who this alternate dimension Tree is, what she would wear, and her influences. Especially, that her mom is still alive and her mom has much more of an influence on her clothing, and she’s more sophisticated—all those choices started coming into play naturally. 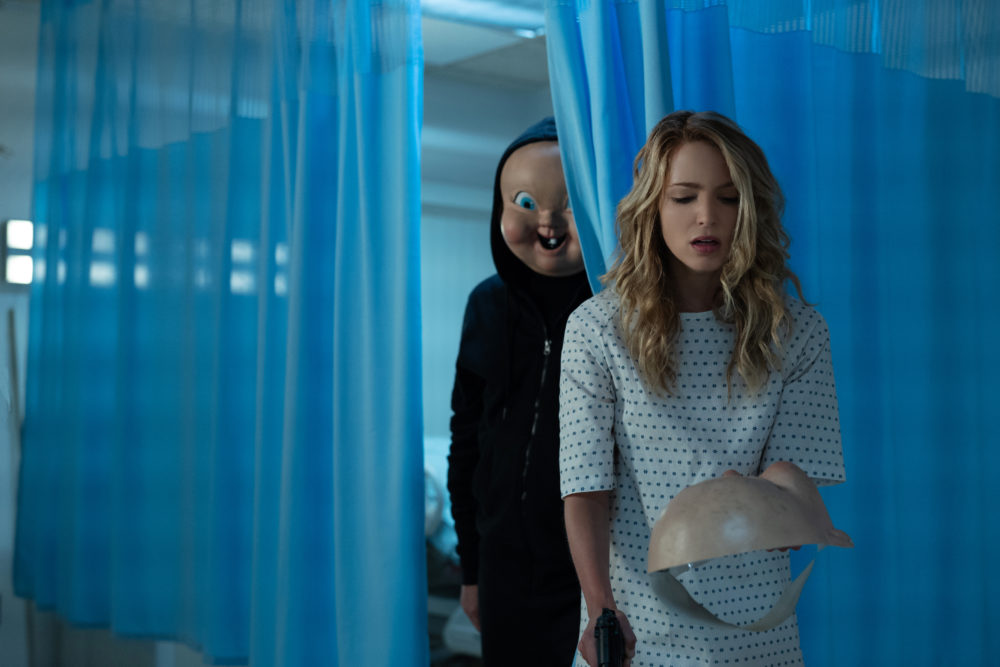 HelloGiggles: Would you say in that sense, the parallel universe and the time loop causes Tree to become more aware of how she’s expressing herself through clothes?

WAA: Definitely. I think she needs to feel like she can figure this mystery out. In order to do that, she needs to feel confident. She is grappling with the fact that her new boyfriend is dating someone else. So, she wants to look cute and try to win him back over each day. She wants to catch his attention. It’s those subtle little things and so there’s multiple reasons why she’s changing her clothes every single day. 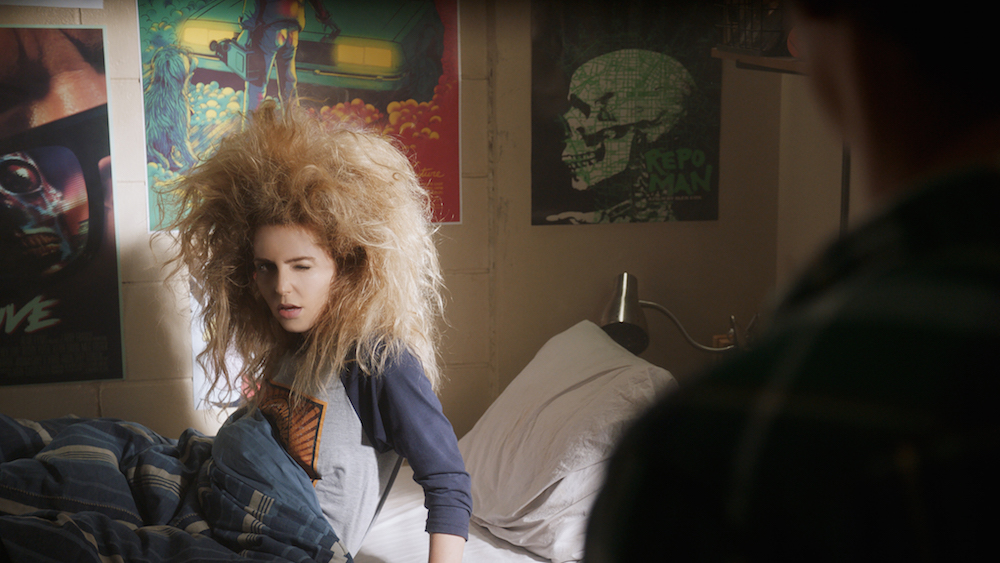 HelloGiggles: Is it almost like she’s expressing the feeling someone does when they want to impress an ex, but she’s also trying to get with him?

WAA: Completely, yes. She wants to look cute. She wants to put her best foot forward. And each new day is a new chance for her to see Carter and to impress everyone else around her. So she’s giving different outfits, different tries. But as she keeps going through the loop, she’s just getting tired and so she’s just putting on jeans and t-shirts because she wants to look cute, but she also doesn’t have time to think about it. She just needs to figure out this problem. 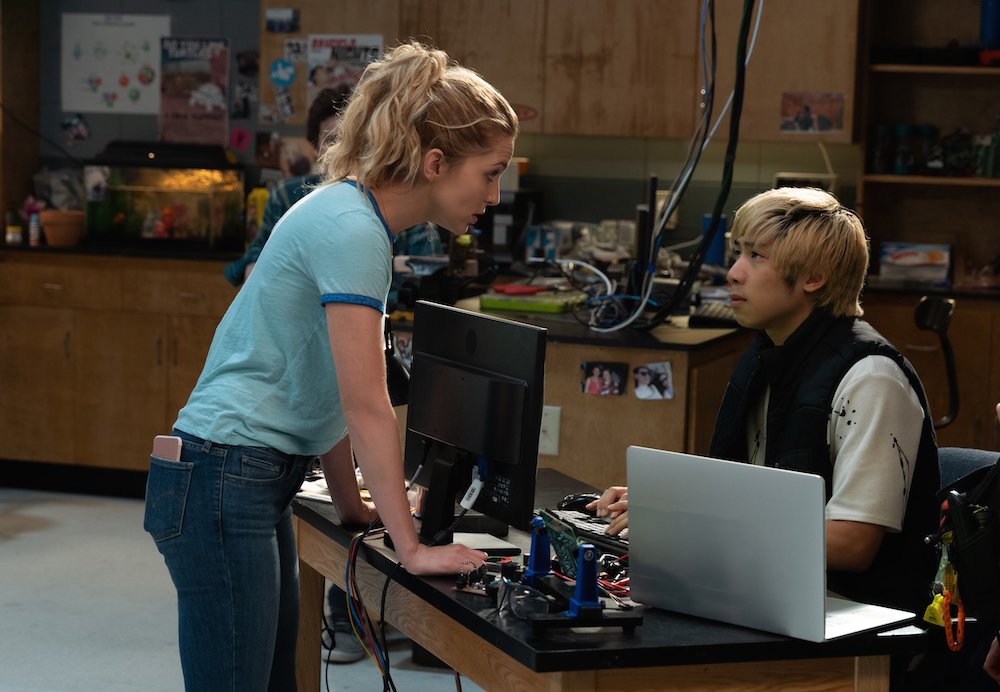 HelloGiggles: Do you work alongside the actors to discuss the costuming for their characters? Is it collaborative in a sense?

WAA: Definitely. Jess, since she was going to have so many costumes in this movie, we talked on the phone before we met in real life several times. I sent her tons of images and we were both in agreement of the direction we wanted to take the clothing, and then we had several marathon fitting sessions where we came up with tons of outfits. The hardest part was actually whittling it down to what we want to put in her movie because we had so many good outfits. There were so many that didn’t make the cut.

For Jessica Rothe and Israel Broussard, they’ve played these characters before. And then, in regards to new characters, they’re figuring out who these people are. So much of what I do is, in conversation with both Chris and the actors, why are they wearing this? We don’t want them to be stereotypes, we want them to be fleshed out and believable. They need to really put on the character’s skin and that involves being comfortable in what they’re wearing. 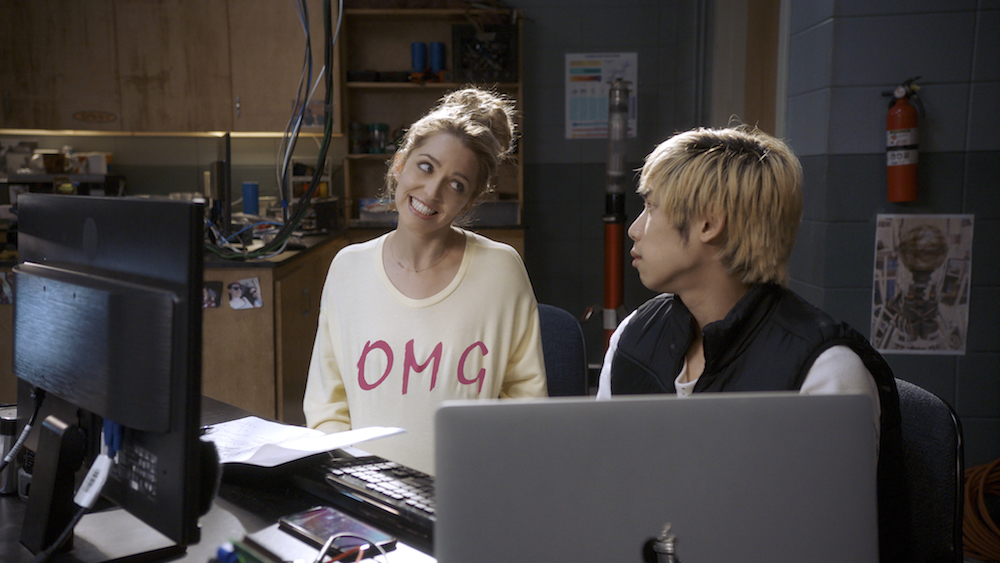 HelloGiggles: How do you source the costumes themselves? Do you go on several shopping trips or do you make them?

WAA: It’s a mixture, but mostly it’s an endless amount of shopping trips. Who knows how many times I went to the mall, to these shops, searched online in the middle of the night in my hotel room. Every single costume is a treasure hunt. You can’t just find the best possible thing for each person. It involved tons of late night online searching, trying to find duplicates of costumes from the first movie.

We did also make things, like Danielle’s little hair bow and her spare costume. I designed that baby’s mascot fabric myself and I had it printed. And then the dean has this cat tie that I designed and had the fabric made. So it’s a mixture of doing both. Since it’s a contemporary, set in a college, I wanted to make it feel real, like what college kids wear.

HelloGiggles: Do you approach movies with elements of horror and fantasy different than if it’s a more realist plot? How does that affect what you want the costume to communicate?

WAA: Each movie I try to approach basically the same way, I’m trying to figure out what are the shapes that those personalities take. Also, in the funny humorous moments, but then also have the darker shapes and make sure that the killer is scary.

But then every movie is different. My last movie, Piercing, just opened two weeks ago. That one was a super heightened world, and very high-fashion. It was much more of a designed world than the real world where we live day-to-day. Trying to find the rules of each movie is the main goal at the outset. 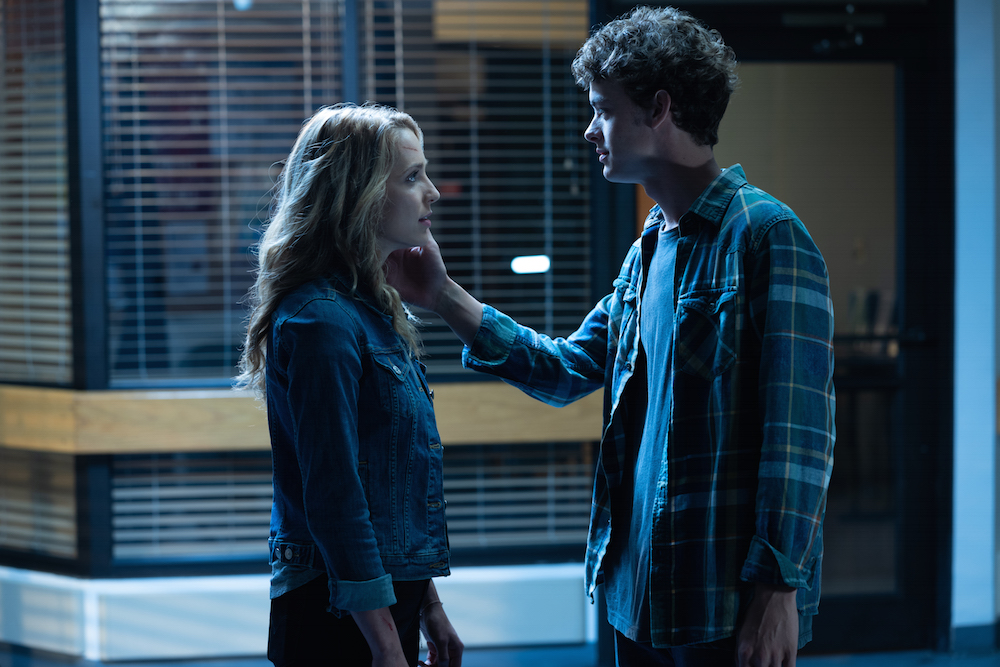 HelloGiggles: If you were personally placed in a time loop or a parallel universe, what’s nothing new you would try with your approach to clothes?

WAA: That’s a really good question. I think for me, I would love to create more of my own clothes and that’s what I’m sort of doing now. My New Year’s resolution this year was to, at least in my personal life, try to stop buying fast fashion and make more of my own clothes. I think I would try to attempt to do the same thing in a parallel universe. My job requires I buy clothes from every avenue. But in my personal life, I try to be more environmentally conscious. It’s also fun to design my own things; I designed and made my own outfits for the premiere.

You can see Happy Death Day 2U at a theater near you.