When Halloween rolls around, the number of movies and TV episodes to watch (and re-watch!) can be overwhelming. Some are scarier than others, but there are always so many choices! Here to help you narrow down what to binge this weekend (or all the way through Halloween!) is the HelloGiggles staff. And these are our nine — plus, bonuses! —Halloween favorites.

My favorite Halloween movie is a lesser-known gem: The Halloween Tree. I feel like I’m the only one who ever watched it, but it was one of my favorite parts of Halloween as a ’90s kid. I remember my mom having to tear me away from the TV to go trick-or-treating when it was on. It’s an animated “kids” movie, but it’s weirdly dark. It follows a group of kids who are trying to find their friend, Pip, who somehow gets spirited away and whose soul is trapped inside a jack-o’-lantern. And along the way they learn about the history of Halloween? It’s based on a Ray Bradbury novel and the movie is actually narrated by Bradbury himself. I’m telling you, this is a gem of a Halloween movie. Criminally underrated. — Emily Popp, Deputy Editor 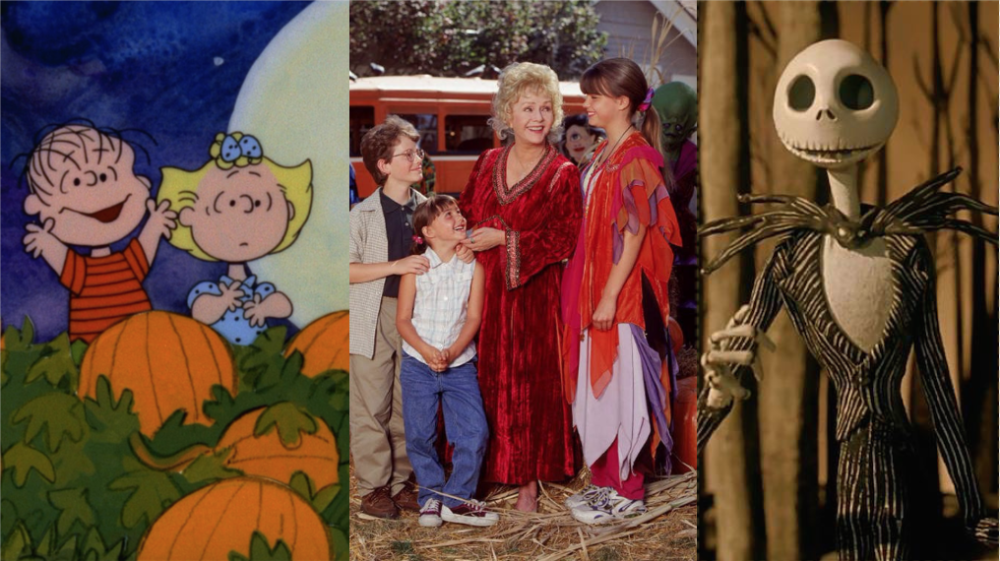 My all-time favorite Halloween episode was Boy Meets World‘s “And Then There Was Shawn” from Season 5 (which I can now re-watch in time for October 31st because all seasons are on Hulu!). Even though it *technically* originally aired around Valentine’s Day, it’s 100% my favorite “scary” episode of a TV show. PLUS, it featured special guest star Jennifer Love Hewitt. — Toria Sheffield, Editor

If I don’t watch Halloweentown to commemorate the month of October, something is very, very wrong. Like, if I don’t quote this movie at least once a day during this time, you should definitely call my loved ones and ask if I’m okay. Because what is not to love about this DCOM? You’ve got witches, a skeleton who doubles as a taxi driver, and Debbie Reynolds. The stuff of dreams! — Anna Gragert, Associate Editor

In my book, Halloween is synonymous with TV Movie It’s The Great Pumpkin, Charlie Brown. It always puts me in the spooky spirit, watching Linus and Sally wait for the title gourd and Snoopy fighting the Red Baron as the World War I Flying Ace. And it’s the ideal film to put on while carving your own pumpkin because, like, you don’t want to get scared while carving a pumpkin, you know? — C. Molly Smith, Assistant Entertainment Editor

My fave Halloween movie is definitely Halloween (any of them, but the first is obviously the best). It’s not overly scary, but there’s something about a good campy horror movie that I always love. It also has great music to go with Michael Myers’ creepy slow walk that somehow is still fast enough to catch up to any of his victims. Plus, it has the original scream queen, Jamie Lee Curtis. — Gretchen Cathcart, Editorial Video

I absolutely cannot go without watching The Nightmare Before Christmas on Halloween. I’ll throw it on after work or luck out and catch it on ABC Family/Freeform’s “13 nights of Halloween”, but I have to watch it. I genuinely love gore, insanely scary horror, and anything that feels so real it’s scary so this time of year is so filled with movies and activities that this is my wholesome palate cleanser. A way to reset before going out or staying in and scaring myself some more. Not only is it one of my Halloween favorites, with a BOMB soundtrack, it’s always fuel for a great debate because is it a film Halloween film about Christmas? Or a Christmas film about Halloween???? — Blaire Bercy, Executive Video Producer

Even though the term “halloween” never appears in the film, part of my October ritual (in between binges of Hocus Pocus) is watching Death Becomes Her at least once a week. From the campy, feuding villains depicted flawlessly by Meryl Streep and Goldie Hawn, to the Academy Award-winning, skin-contorting special effects. Not only can I mouth just about every line of dialogue, I can’t help but obsess over the lengths these women go to keep their youthful glows — truly scary! I also love that, while this movie didn’t perform great at the box office, it has been resurrected into a creepy cult classic in the LGBT community. Why, you ask? Not sure, but TBH who can resist a gnarly shovel fight between two gorgeous divas. It’s a hot, steaming, scary, mess and I. Love. Every. Second. — Dan Magro, Sr. Video Editor

Favorite Halloween episodes: The Roseanne episodes are so great because of their costumes (Darlene as Tippi Hedren in The Birds is ICONIC.) And I’ve forever wanted to be Roseanne AS Prince for Halloween. Favorite Halloween movies: Nightmare on Elm Street 3: Dream Warriors (because I love any movie that requires assembling a team to defeat a villain), Slumber Party Massacre 2 (because I have a shameful crush on the Driller Killer). And of course, I *always* watch Elvira: Mistress of the Dark. — Marie Lodi, Beauty Editor

During the Halloween season, I love to watch Carrie. Not only do I love ’70s fashion (like, can we please go back to the Farrah Fawcett hairstyle?) but this is one of the few creepy, mentally disturbing, *and* campy movies out there. And hello, young John Travolta! Like, even though the beginning of the movie is a bit much, I love how weird Carrie is, how cuckoo her mom is (the line about the dirty pillows cracks me up every time), and I love how ’70s this movie is. However, that last shot of Carrie’s mom looking like Jesus Christ himself with all of those daggers is just creepy AF and Carrie murdering everyone, including the teacher who tries to help her, is just pure evil. In my opinion this is the perfect mixture of fun and terrifying. — Alyssa Morin, Associate Beauty Editor