When I was 17, I announced to my mom that I wanted to take ice skating lessons. I’d secretly decided that I wanted to be a professional figure skater, an aspiration that was beyond unlikely. I blame Disney for telling me to follow my dreams.

My mom, more pragmatic than Disney, told me that I would need to get a job to pay for lessons, and promptly found me a weekend job in a local garden center. My first day was also the grand reopening of the garden center after it had been bought by a national chain — it was a trial by fire.

None of the price tags scanned, the lines were out the door, and the customers were getting increasingly irate. Most tutted or raised their eyebrows passive aggressively — but some spoke down to us and got snappy, as though we were idiots deliberately ruining their day.

This became a common theme during my time working there.

While a lot of people seem to think working in customer service makes you intellectually inferior, my colleagues were extremely good at their jobs. They were patient, polite,  and courteous even in the face of outrageous rudeness. They were ready to crack a joke with a stranger, and committed to solving any problem. This job taught me to have the upmost respect for customer service staff; you can’t judge someone by your own preconceptions about what they do for a living. 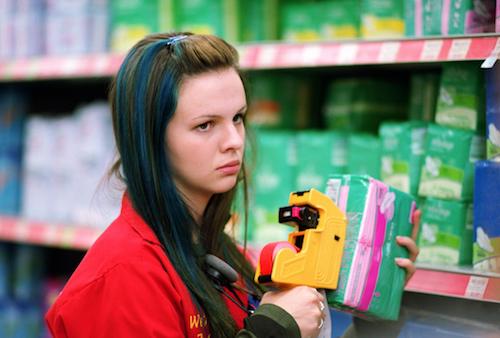 Unfortunately, not all the staff members were so great. At that age, I was shy, didn’t drink, and had never even kissed anyone. The other teenagers working the weekends would gather round the cash registers to brag gleefully about house parties, hook-ups, and drinking sessions. They made it clear that they had no time for me, and cracked cruel jokes about our co-workers.

Feeling like the outsider made a boring job torturous, but luckily, things changed. I got along with some of the older, more mature staff. One weekend, I worked both days, and discovered that the Sunday girls were hilarious, interesting, and welcoming.

Once I switched my shift to Sundays, I started to enjoy going to work.

Okay, almost. I realized that a job isn’t just what’s written down in the description; the people you work with can make the difference between wanting to run screaming from every shift and muddling through it with a laugh.

The only thing was that I had zero knowledge of plants, so customers’ questions filled me with dread. This forced me to utilize the resources I did have, namely the experts I worked with. Since they were often at the other end of the enormous store, this meant using the radios.

For a shy teenager who blushed when anyone so much as spoke to me, it turned out to be the challenge that pushed me to find my voice.

By the time I left that job, I had no problem answering the phone or getting a price check over the radio in front of a store full of staff and shoppers.

Trudging to work every weekend knowing that most of my friends were enjoying their day of freedom made the hours stretch even longer. It felt like the moment I put on my hideous beige uniform, I lost all my personality.

But I still showed up every week. I’d seen how much pressure one missing person put on us all, and I’d developed a sense of responsibility for the team.

It helped that the money was slowly building up, money I’d earned myself for the first time in my life. Back then, it seemed like a fortune. I had enough not only for ice skating lessons, but also for occasionally buying clothes or going to the movies with my friends. Many teenagers working weekend jobs do it to support their families, so I was incredibly lucky. I even saved enough for two very inexpensive vacations when I left high school.

It’s not like those first pay checks turned me into an aspiring millionaire, but I learned that making your own money is the key to independence, and it will always give you a feeling of pride.

If you’d asked 17-year-old me, I probably would have preferred to be handed the cash, but now I’m so grateful for everything I learned about people, the real world and myself at that first job.

It taught me perseverance, confidence, how to work in a team, and the freedom that comes with making your own money. A decade later, I no longer blush when a stranger talks to me. I never wear beige. And I still know nothing about plants.