A couple of months ago, a group of BuzzFeed writers tested out the glitter eyebrow trend with some pretty terrifying results—they had trouble removing the glitter and lost a good amount of hair. While their experiment brought up the potential dangers that can arise with homemade beauty treatments, it doesn’t necessary mean glitter brows is something we should all stay away from. The women had used lash glue to apply the glitter, which ended up being the cause of the damage. Luckily, there are companies that make products specifically to be used on brows. As a lifelong fan of glitter, I wanted to test out this glamorous look as safely as possible. 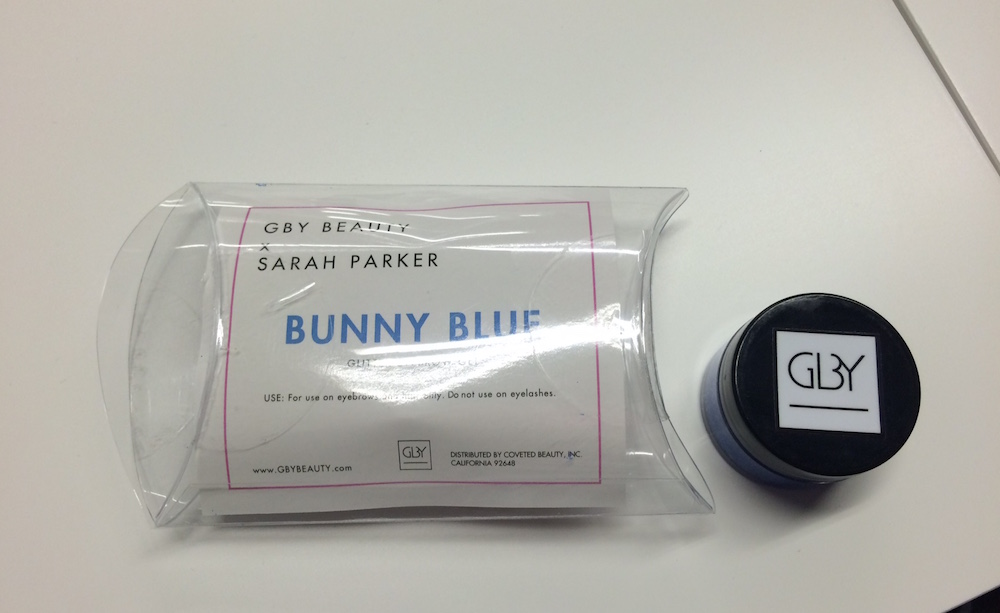 I decided to use GBY Beauty’s Glitter Eyebrow Gel, which is non-toxic, not tested on animals and will not stain brows. It also doubles as a gel for glitter roots, which means I could test two different trends at the same time if I wanted to! The removal instructions sounded very simple and safe—just gently wash with soap and water. 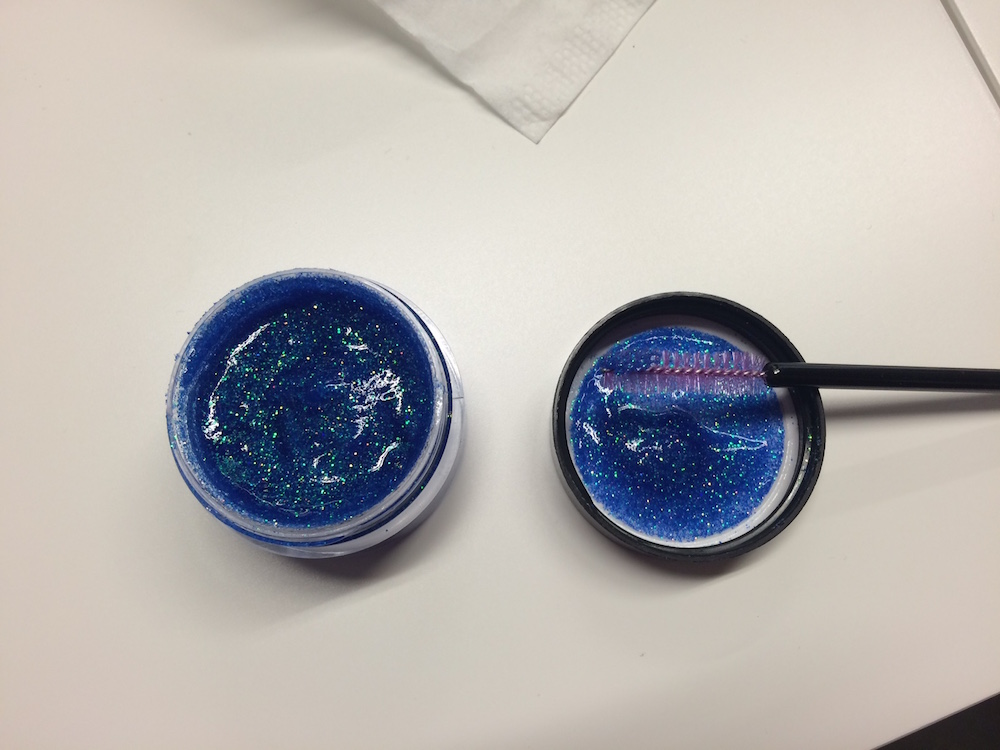 The night before my foray into the kingdom of glitter brows, I did a little bit of tweezing to clean things up around the area. At first I wondered, what kind of outfit would complement my new look? I immediately pictured myself in a silver cape and gogo boots, but decided to my outfit should be toned down in order to let the focus be on my face. After settling on a simple black skater skirt, black-and-white striped top, lace-up boots and suspender stockings, I was ready to get down to business. The business of glitter eyebrows. 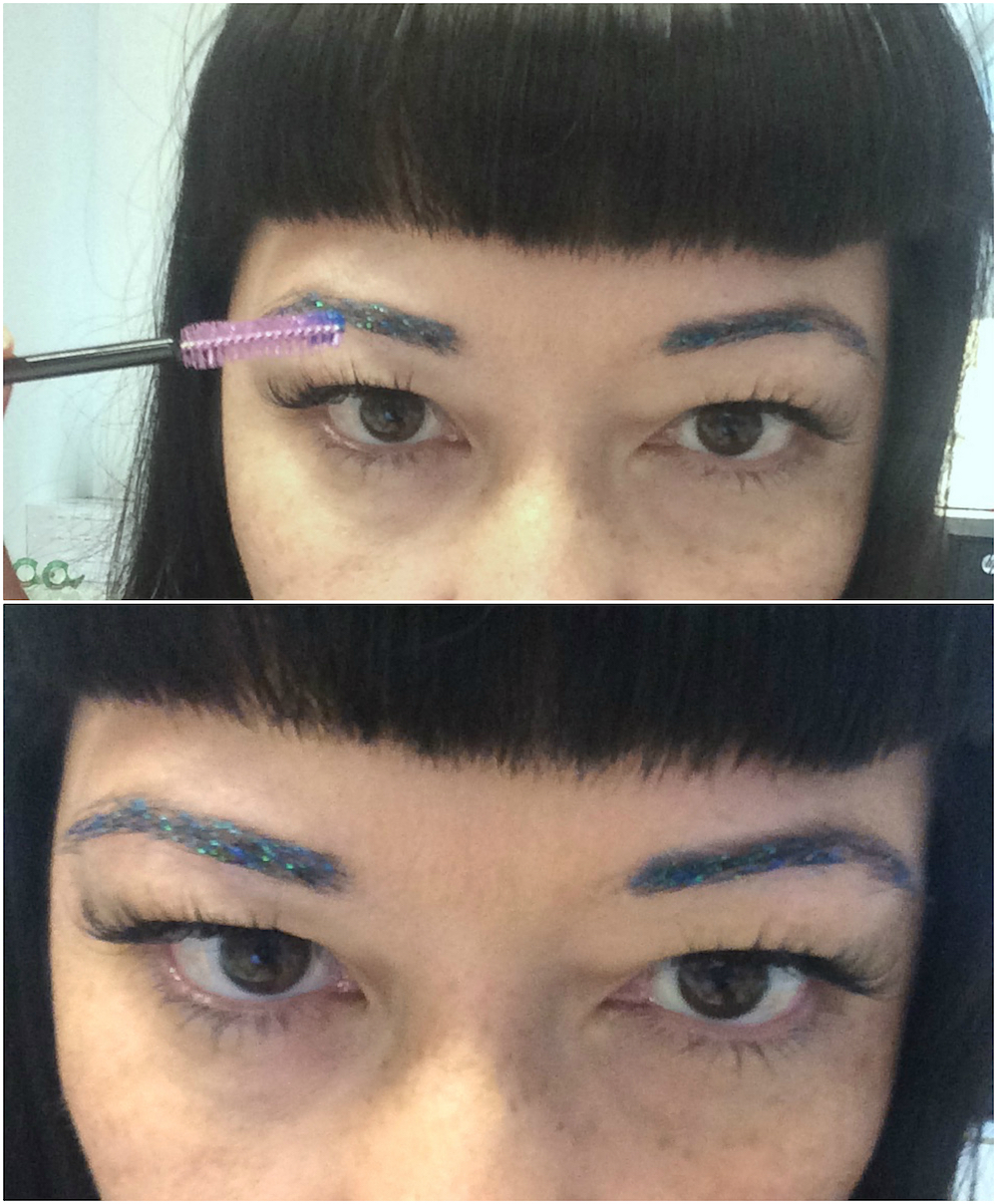 The glitter gel I decided to try was called “Bunny Blue,” which is GBY’s collaboration with designer Sarah Parker. After opening the small jar it came in, I immediately noticed that the gel had a nice fruity scent, unlike the glitter body gels of the ‘90s that smelled like rubber tires. I dipped a spoolie brush into the gel and gently applied to my brows. After covering the entirety of my brow, I looked at my artwork in the mirror. The glitter brought a subtle shimmer to my brow which was nice, but I wanted them to look more dramatic so I applied more.

After I was satisfied with the amount of glitter on my brows, it was time to take these babies out for a spin. My first public stop was a cafe in order to get caffeinated. When I ordered, the barista didn’t say anything or make any kind of “WTF?” facial impression. I wasn’t sure if she was too busy to notice, didn’t want to be rude or that this was possibly not the first time someone walked in with shimmering caterpillars on their forehead. It might be a regular occurrence for her. When I got to work, it took a minute for my coworkers to notice my new look. Once they did, I got a positive reaction and a couple of them tried it out themselves. I also sent a pic to my boyfriend who thought it was cute.

Throughout the day, I’d momentarily forget about my glitter brows until I had an itch and I’d feel the brows which felt hard like they were shellacked to my head. Even though I had a tempting urge to rip them off of my face like a scab a couple of times, I made sure not to rub them. Later that evening, I washed them off with soap and water. At first I dabbed each brow with water and the gel immediately softened. Next, I rubbed a small amount of my face wash onto the brow as the glitter came off easily on my fingers. I didn’t lose any of my precious brow.

To be honest, I was a tad nervous to try out the brows at first. When I was younger and went through my own Miley Cyrus-esque phase of dressing wild, I would have done my brows like this without any qualms. While I definitely do not dress like some sort of straight and narrow businesswoman now, I was hesitant to walk around with flashy glitter brows. Once I had them, though, it was no biggie! The glitter was subtle enough that it was wearable during the day, depending on the applied amount. I felt like it wasn’t much different than wearing a bold eyeshadow or colored eyeliner.

I also realized that my own personal beauty looks that I consider to be normal and wear every day—like winged eyeliner and red lipstick—are seen by some others to be special occasion looks. Maybe glitter brows can fit in that “either/or” category, too. There’s nothing wrong with adding a bit of sparkle to brighten up your day (and face!)