I had to give up drinking, and I realized the unhealthy ways we talk about alcohol

A year ago, right after my 21st birthday party, my mom told me that she thought I might have a drinking problem. “I want you to be careful because it seems like most of your social life is focused around drinking,” she explained. During the party, my friends had given speeches and shared stories of me getting drunk.

At the time, I thought my mother was overreacting because getting drunk is so normal in my social circles. I never drank alone and sometimes went weeks without drinking, so I believed I was far off from having a problem. But I was actually binge drinking.

Studies done in the United States and Canada found that four out of ten young adults aged 18 to 24 are frequent binge drinkers. Unlike having an occasional drink, binge drinking poses more risks, including higher blood pressure, which increases the possibility of hypertension and related diseases. “Binge drinking also places you at more risk for increased mental health concerns, physical injuries, and your physical safety,” explains Dr. Emily Eckstein, a licensed therapist and the Director of Clinical Services at Beach House Treatment Centers in Malibu.

Despite these health risks, binge drinking never felt dangerous to me.

In fact, up until recently, I thought social binge drinking was an essential part of being a well-rounded college student. While this sounds ridiculous, it’s true. For a long time, I saw people my age who chose not to drink as social anomalies. If I went out and came across someone who wasn’t drinking, I’d ask why, as if people who chose not to drink owed me an explanation.

Last year, I started taking a drug called Isotretinoin for my skin. Since this drug already compromises your liver, it meant that I had to limit my drinking. I struggled in situations where alcohol was present and ended up sacrificing a lot of my social life. I had to do this because, when I did go out, I’d be pressured into drinking. “Just one drink. It won’t mean anything,” friends would often say. But it was never just one drink.

I don’t think the friends who pressured me into drinking were trying to be harmful. Similar to how I used to question people who chose not to drink, most of us don’t consider how this interaction might be damaging for them. We don’t consider this because drinking culture is so normalized in social spaces, especially among young adults in college. “Alcohol is a social lubricant that many students become dependent on to show up or perform in social situations or even connect with their peers,” explains Dr. Eckstein. “This level of exploration in regards to alcohol has also been normalized in the media.” 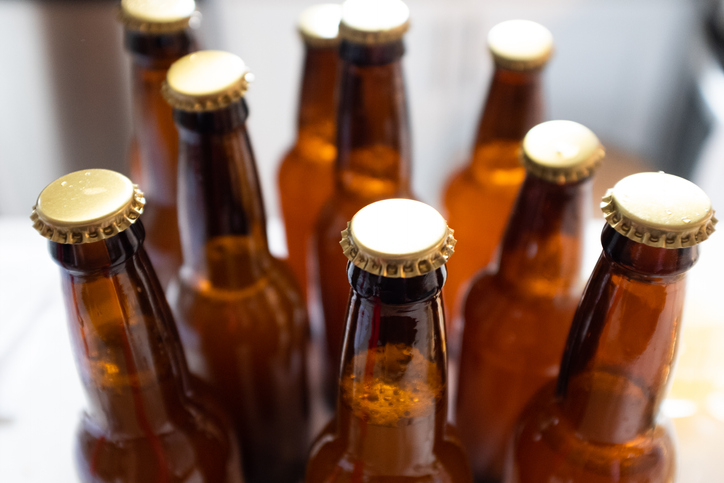 I continued to limit my socializing because I depended on alcohol as a social crutch. In my first two years of college, I would drink before going out to alleviate my social anxiety. And then, of course, I’d drink more when I was out. Going to parties and social events sober was, and often still is, terrifying for me. Before I limited my drinking, if I did go out sober, I would anxiously follow my friends around. If my friends were busy or I couldn’t find them, I’d either drink copious amounts of alcohol or hide in the bathroom.

For a long time, I justified my drinking behavior because I viewed it as being entirely social. Alcoholism meant being dependent on drinking, and I didn’t think that described me. Those two months when I tried to limit my drinking showed me I was wrong and that I was, in fact, dependent on alcohol.

Growing up, I’d seen the detrimental effects of my dad’s alcoholism on his life, his marriage, and other relationships. Realizing this, I started to rethink my own relationship with alcohol. Like how a night of heavy drinking meant losing an entire day because of my hangover—a day that could have been spent working or a day that could have been filled with enjoyable activities.

For these reasons, I gave up alcohol completely for a month last year, rather than just limiting it. I wanted to prove to myself that I could exist without drinking. I found that I had so much more time to spend on my academics, but I admittedly had to sacrifice a lot of my social life once again. Since then, I’ve started to try mindful drinking when I go out. This doesn’t mean that I don’t drink, but that I think carefully about how much I drink and the repercussions this might have.

For me, practicing mindful drinking includes centering a lot of my social life around other activities that don’t involve alcohol like going out for coffee, going for a walk with friends, or inviting people over for dinner. When I do go out, I’ll substitute five double vodkas for just one beer and turn down the tequila shots being offered. It is difficult for me and requires self-restraint. I have to be a lot more assertive with friends about not drinking. I have also had a few hiccups along the way (that I’ve often regretted).

While I hope to continue being mindful about the way I drink, my social anxiety remains.

I know I’m not alone. The Anxiety and Depression Association of America found that one in five people dealing with social anxiety live with some form of alcohol abuse and dependence.

For people who drink to manage their social anxiety, Dr. Eckstein suggests, “finding a like-minded peer who can help hold you accountable while also exploring hobbies outside of drinking is helpful…Social connections and structuring your time with scheduled activities allows less space for binge drinking. If you believe your social anxiety is more than you can handle alone, seeking out support at the local college counseling office is always beneficial.”

My housemates and other close friends have made navigating social situations sober a lot easier for me. I’ve also found that there are no quick solutions to fixing my social anxiety. There are often moments when I get incredibly uncomfortable and awkward, especially around friends I don’t know well. But I know that drinking hasn’t helped or developed my social skills. Nor am I meaningfully engaging with friends and peers by getting drunk, especially if I don’t remember anything the next morning. While I am still working on my social anxiety when sober, I believe that I am a lot less socially anxious than I was a few years ago.

So I’d like to relate this back to what I said earlier: Next time a friend tells you they aren’t drinking, try to respect their decision and not look at it as an invitation to persuade them otherwise. I hope to continue being mindful about the way I drink, and I hope my decision will become more accepted and welcomed in my social circles.