Why you should give role-playing games a chance

When you hear about role-playing games like Dungeons & Dragons, what comes to mind? A basement of high school nerds, fingertips stained Cheeto-orange, drinking Mountain Dew with no social lives and six hours to spare on a make-believe battle? Or maybe this scene from Freaks & Geeks when James Franco’s edgy character reaches across the aisle and plays D&D with the not-so-cool kids? 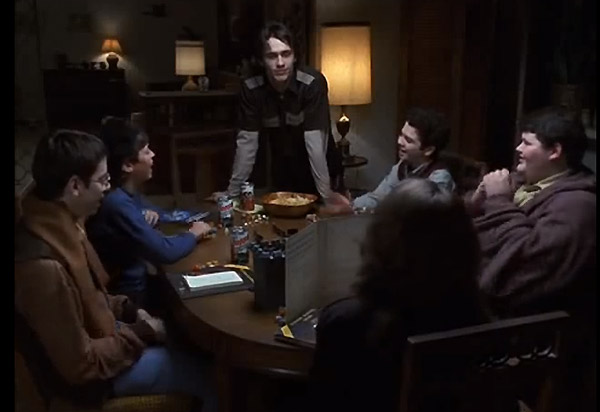 If you had asked me a month ago, I would have had similar answers. But that was before my friend Jonathan approached me with a favor. He’s a game designer, and asked if I wanted to help test-play one of his new short story RPGs. [RPG stands for Role-Playing Game. If you thought Rocket-Propelled Grenade, you’re reading the wrong article but probably need a healthy social outlet, so keep reading.] The game was based on Wacky Racers, an obscure Hanna-Barbera cartoon that resembled a 1970’s hybrid of Cannonball Run and Space Ghost.

I’ve never played an RPG, but was big into theater in high school so playing a role wasn’t that farfetched. My husband is a reformed and repressed D&D gamer who jumped at the chance to play an RPG and not get made fun of (as much). Jonathan brought his girlfriend and after dinner, the four of us sat down to play.

The game-playing part was pretty simple. One person is the designated game master and that person’s job is to keep the story moving forward, while answering questions or concerns as they come up. The other people get to pick their character and once the adventure is underway, you play the game in character the entire time. This means making choices, engaging with others, and tackling challenges, all while working with the limitations of your character’s strengths and weaknesses. There are dice needed for important fighting situations, which I initially thought I wouldn’t like, but ended up being one of the more fun aspects of the game.

Jonathan’s goal in designing these games is simple: make RPGs more accessible. He understands the geek stereotype associated with these games and wants to broaden their appeal. Help the RPG grow up, if you will. By removing some of the trite and nerd-centric fantastical elements from story lines and shortening the playing time, he’s done just that.

Spoiler alert: it was awesome. We had a lot of fun creating something together and the entire game clocked in at just under two hours. Jonathan proved to be an amazing game master, leading us, giving us hints and moving the game forward with enthusiasm.

In addition to spending time with one another (especially time not shouting to be heard in a bar), there were other benefits to playing the RPG:

Storytelling with friends: Laughter and improv make for a good night of entertainment. The fact that you’re doing it yourself and not simply watching someone else do it is clutch. Plus, research shows that storytelling increases empathy and is good for your brain.

Playing a part: You could say that all of grown-up life is playing a part, but at least in the RPG, it’s literally and actively encouraged and you can be honest about it. Relish the chance to be someone else for the night. My husband may have even added a jaunty hat and British punk-rock accent into the mix.

Encouraging engagement: It’s easy to rely on digital means of staying in touch with friends but when it comes to face-to-face interaction, nothing beats the real thing. Getting together in the same space without the use of screens to make game magic happen is one of those gatherings that you’ll always remember.

Fostering creativity: Get those creative juices flowing with your friends. Try new foods, ales, and cocktails that accentuate the game’s theme. Play the role and dress up as you like! Who knows what your new found creative super-powers will allow you to accomplish? Since playing this game, I’ve been inspired by the genre to write a short story for Jonathan.

Solving problems together: How often, in real life, do you get to have an adventure with friends? One that strictly involves a fictional gold heist, heroic triumph, jail-time, or even bodily injury? RPGs allow you to work with your friends to complete a mission or quest, and that’s not an opportunity to be passed up.

Something different to do on a Saturday night: Let’s face it. The bar scene can get tired and expensive. And if you’re a certain age, you might be bored by such an environment. To save some money and switch up your social calendar, consider staying in, getting rowdy at home, and playing a game.

Totally levels up your geek cred: It’s super cool to be a geek right now and with all that newfound empathy, you might find yourself relating better to those geeks in your life.

If you’re looking to learn more, check out Short Story RPG . You don’t need much to get started, outside of the game framework, a few open-minded friends and someone’s living room. Don’t let yourself believe the outdated stereotypes associated with gaming. It’s a whole new way of playing and you might just be missing out on your newest obsession.