I messaged guys on Tinder and asked if they were Team Dean, Team Jess, or Team Logan

Once upon a time, I had the bright idea to message guys on Tinder using only Lorelai Gilmore quotes (okay, fine, Editorial Director Gina had this bright idea, and I remember her shouting “DO IT! YOU HAVE TO DO IT!” when the topic was first brought up). This inaugural attempt of trying to Gilmore online dating was a rousing success, and TWO websites in Australia even picked it up, and that was weird for me. It’s still actually weird for me today.

So, might as well see if Gilmore Girls dating lighting can strike twice, right?

With A Year in the Life quickly approaching, I realized I wanted to once again turn to the online dating app for some Gilmore dating adventures. Forgoing quotes — I actually tried Emily Gilmore quotes, but she is one harsh, sassy lady — I instead opted to ask one of the great unanswered questions of the 21st century: 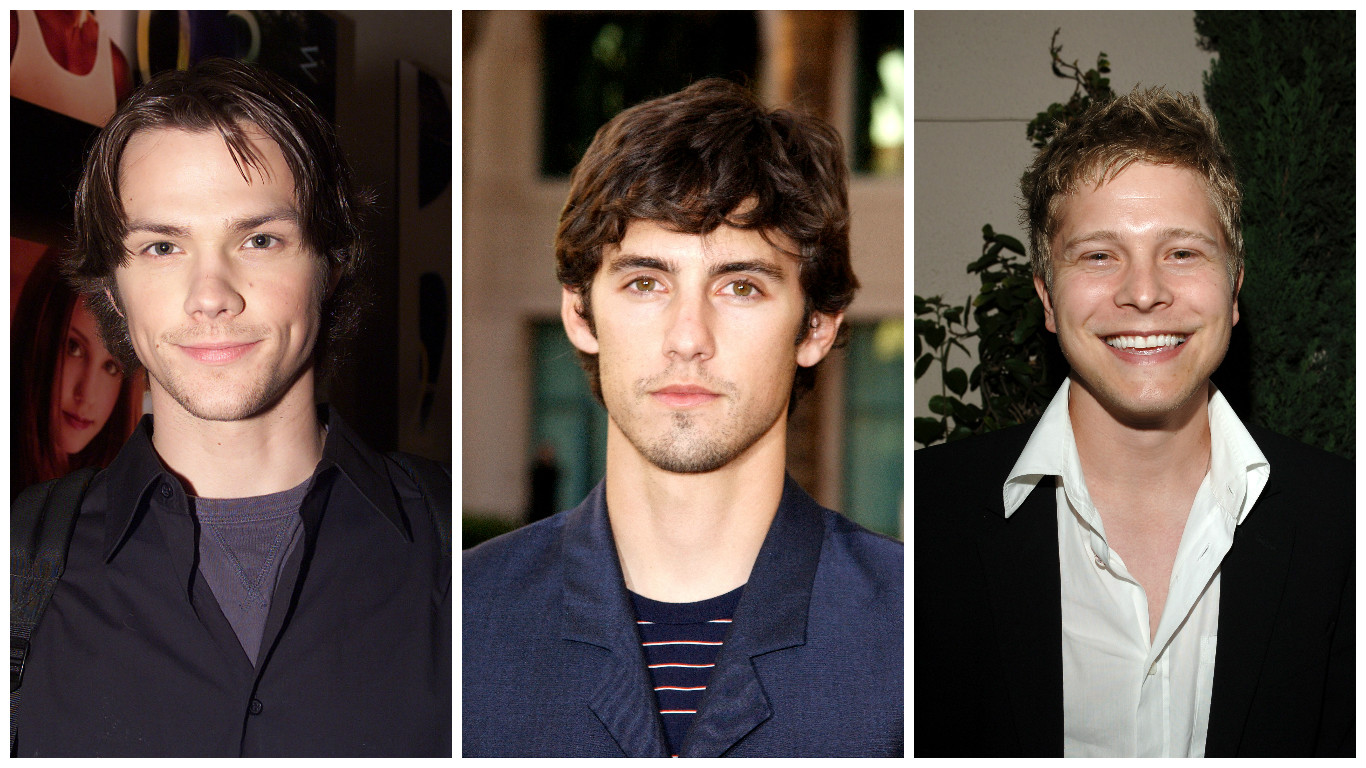 Let’s see if I could get dudes on the internet to pick a team, and then see if they could carry on a conversation with me about Gilmore Girls. Spoiler alert: It was almost as impossible as getting Paris to compromise.

Right off the bat, let’s talk about how many of these dudes were utterly confused by the question. Like, sooooo confused they had no idea what they had just wandered into. 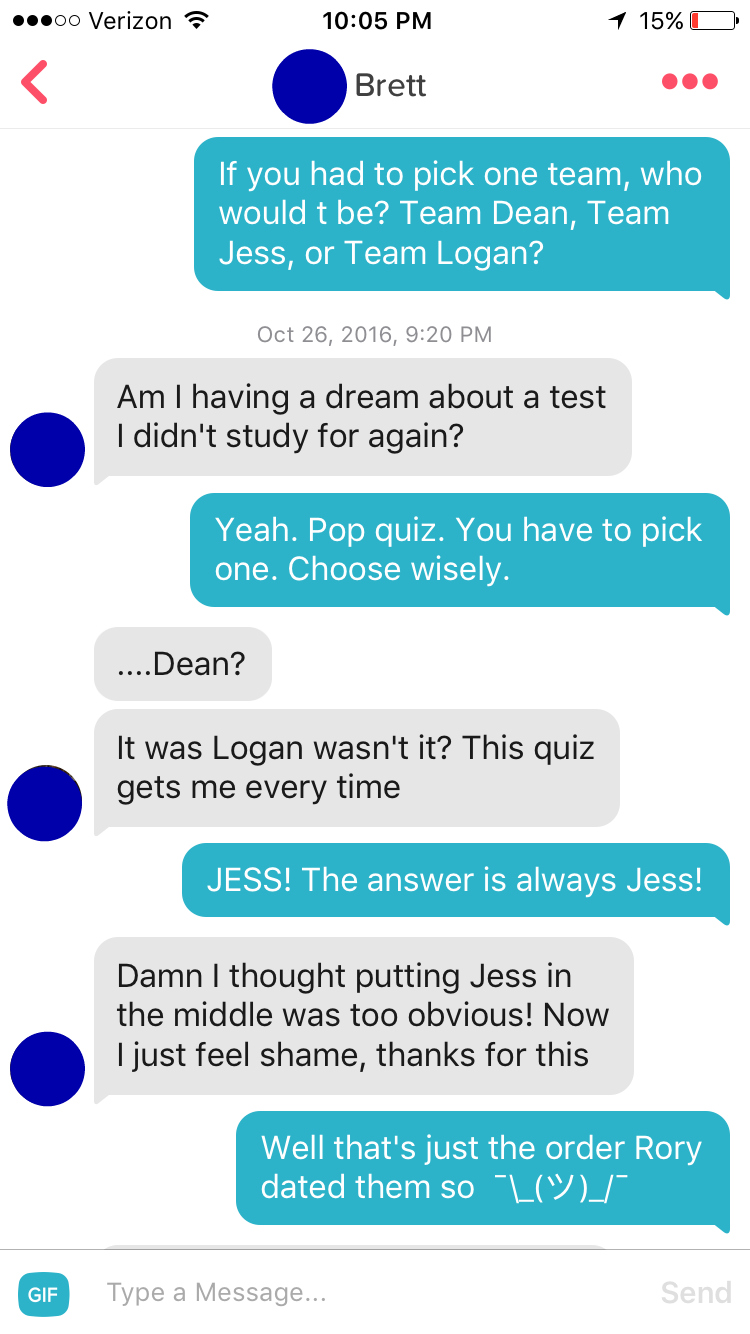 It was a shame so many of these guys actually failed this pop quiz. 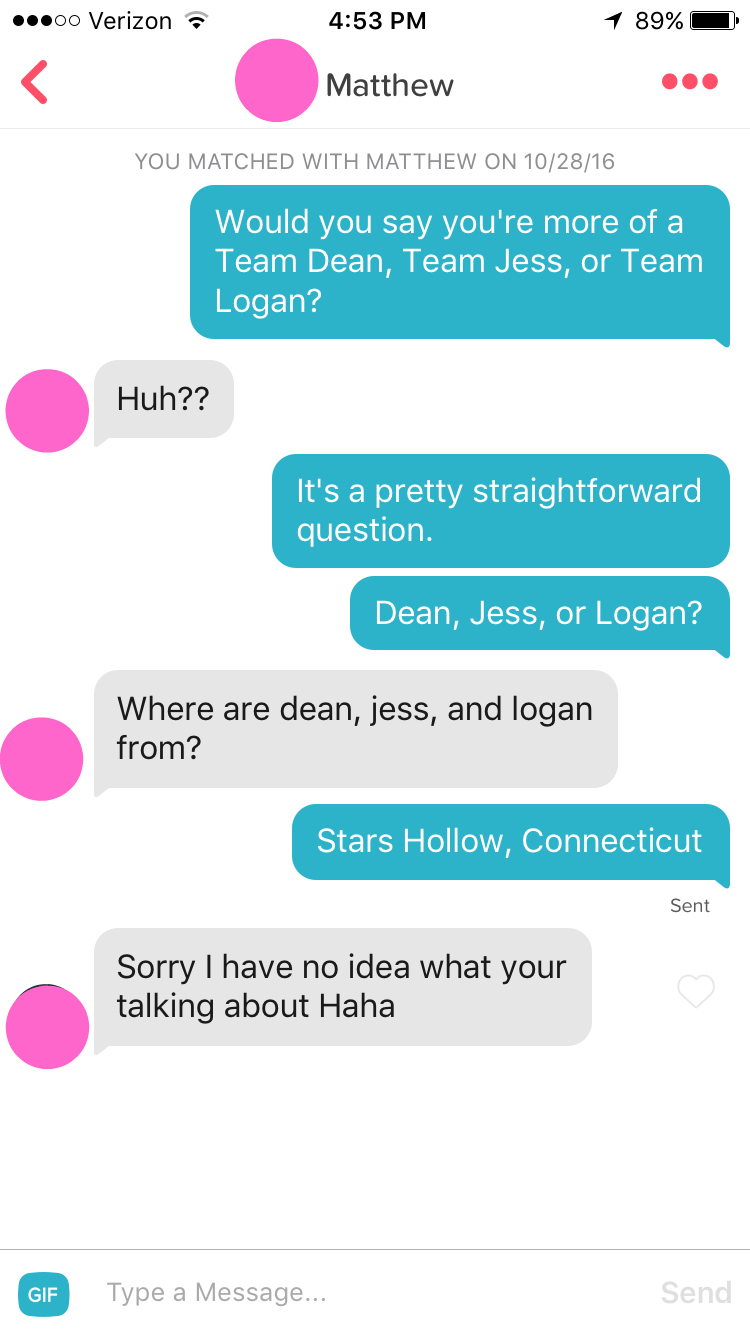 IDK, boy, if you had watched all 153 episodes of Gilmore Girls, you’d know what I was talking about. 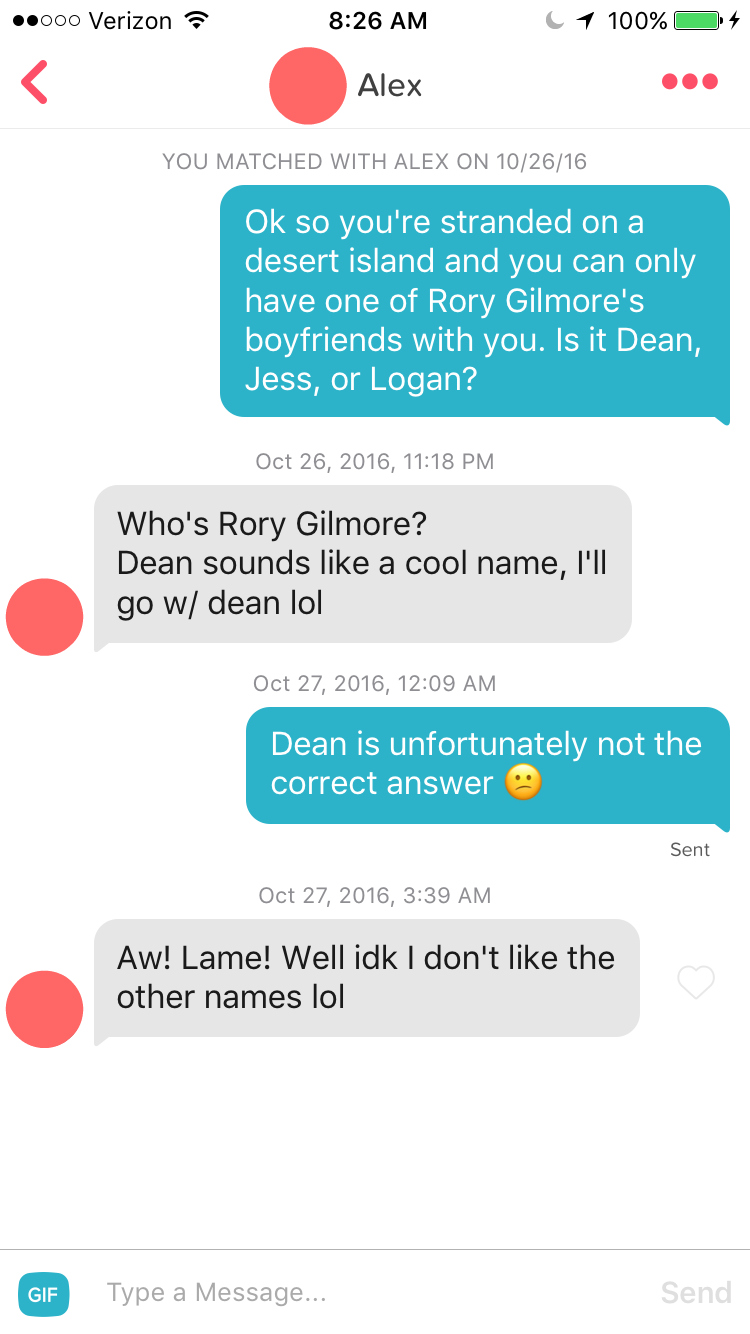 Honestly, the biggest takeaway from this thing is that I learned there are a lot of guys out there who wish their name was Dean. 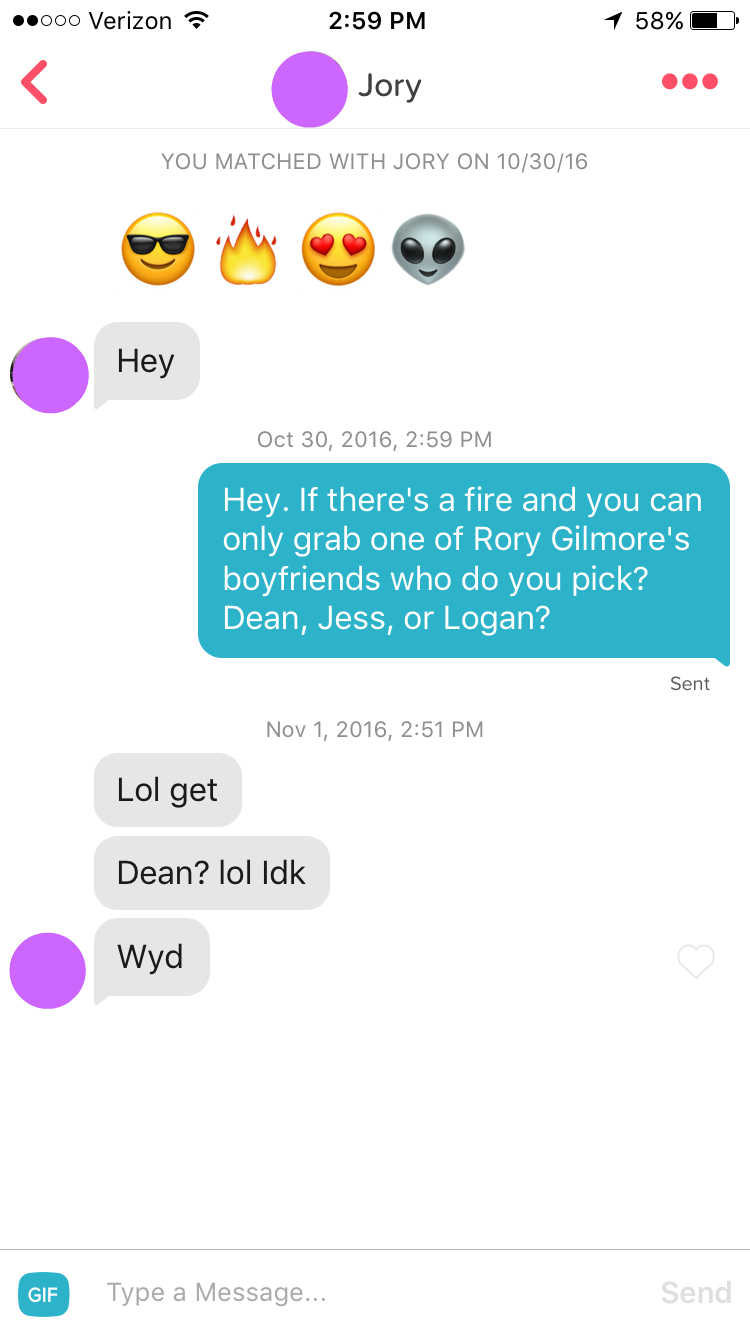 The ones who answered TEAM JESS! clearly knew what was UP. Or not. 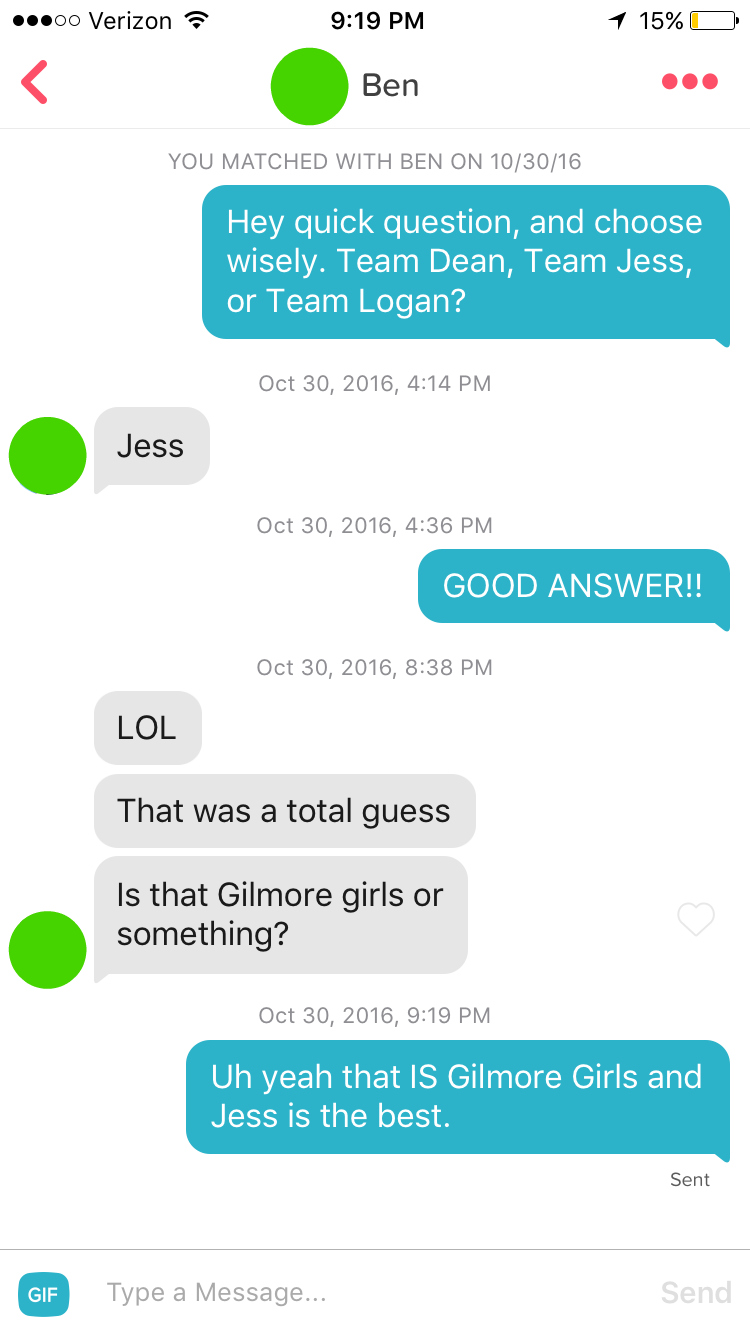 Anyone who answered Team Logan was thinking about a different Logan…or was just confused. 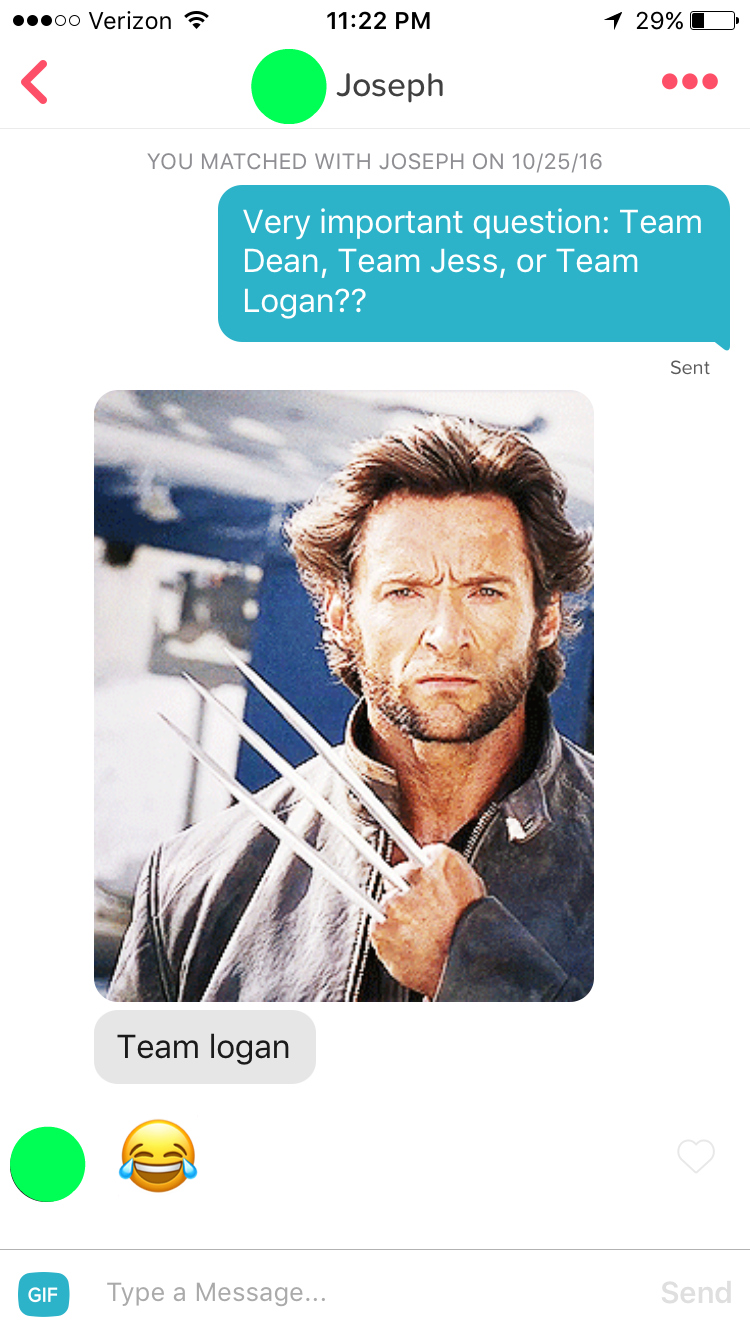 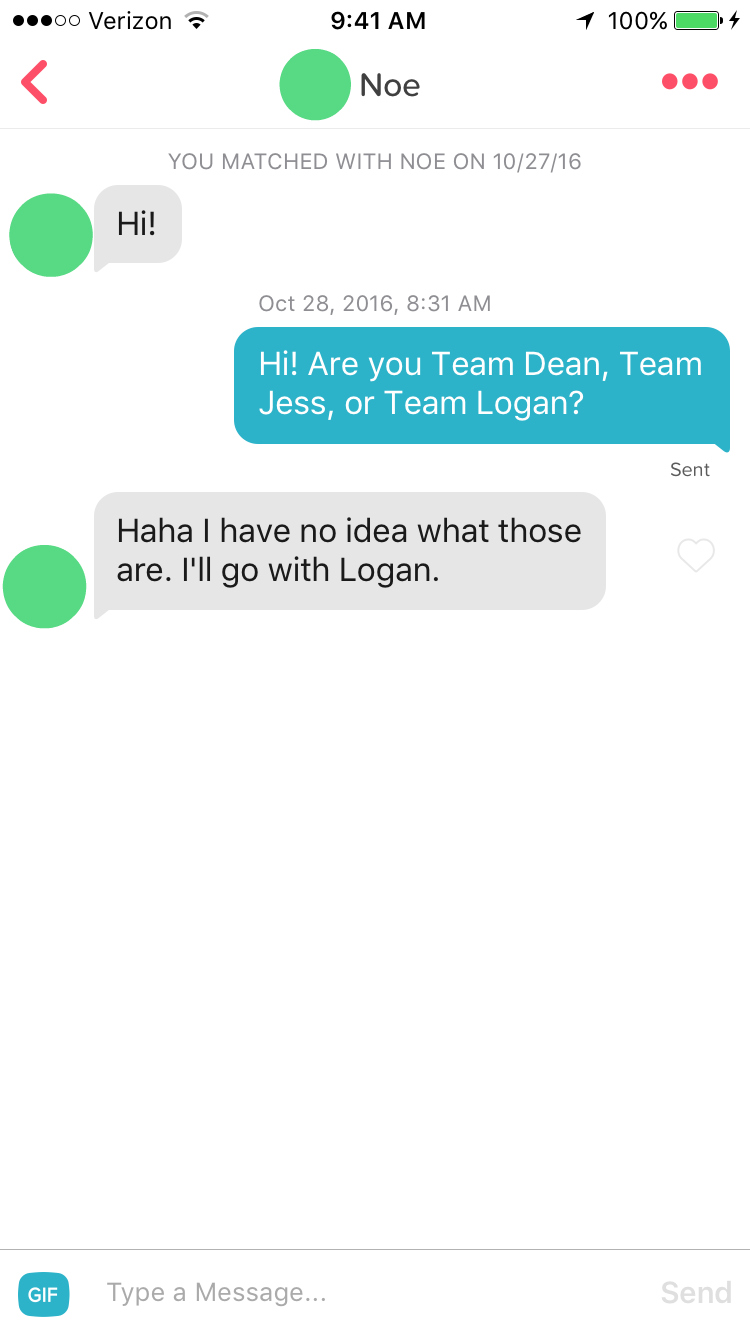 This guy has “no idea what those are” like they’re things. 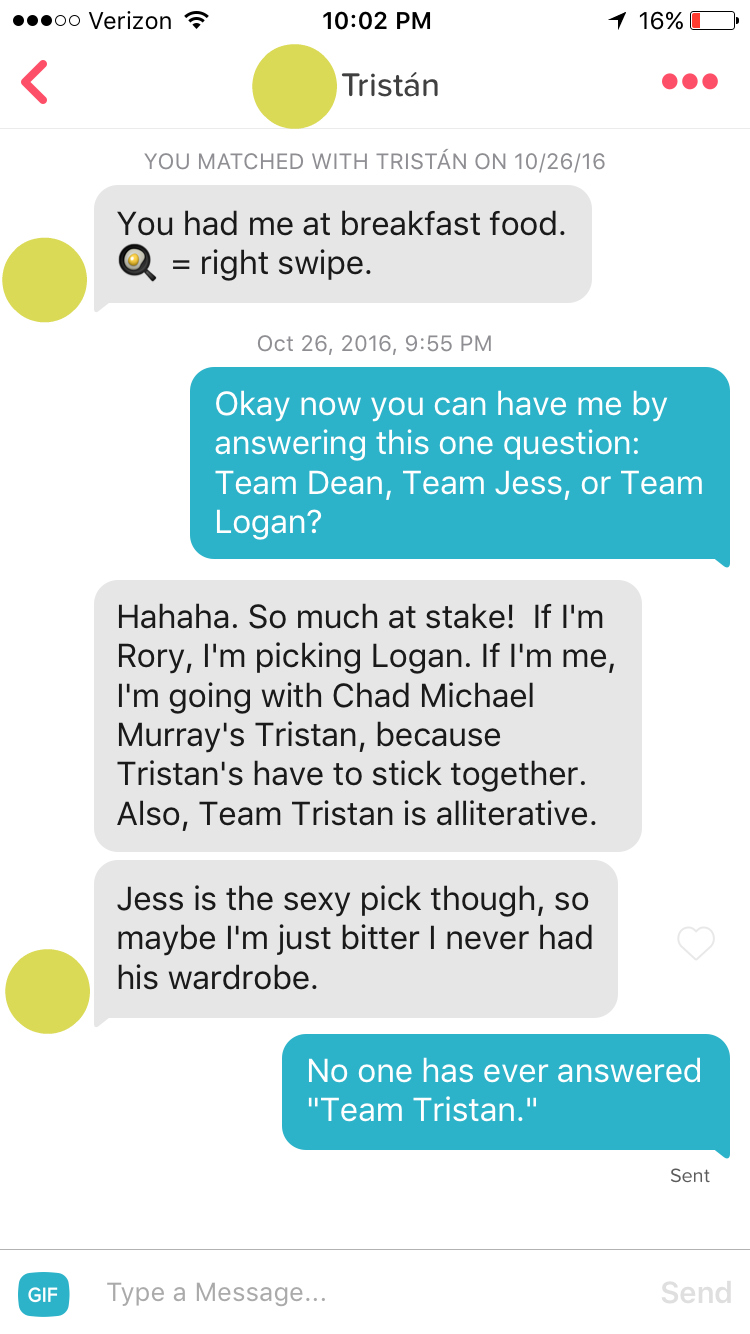 There was one guy who tried SO HARD, but like, when forced to choose between a guy and Gilmore Girls, I’m going with Gilmore Girls. 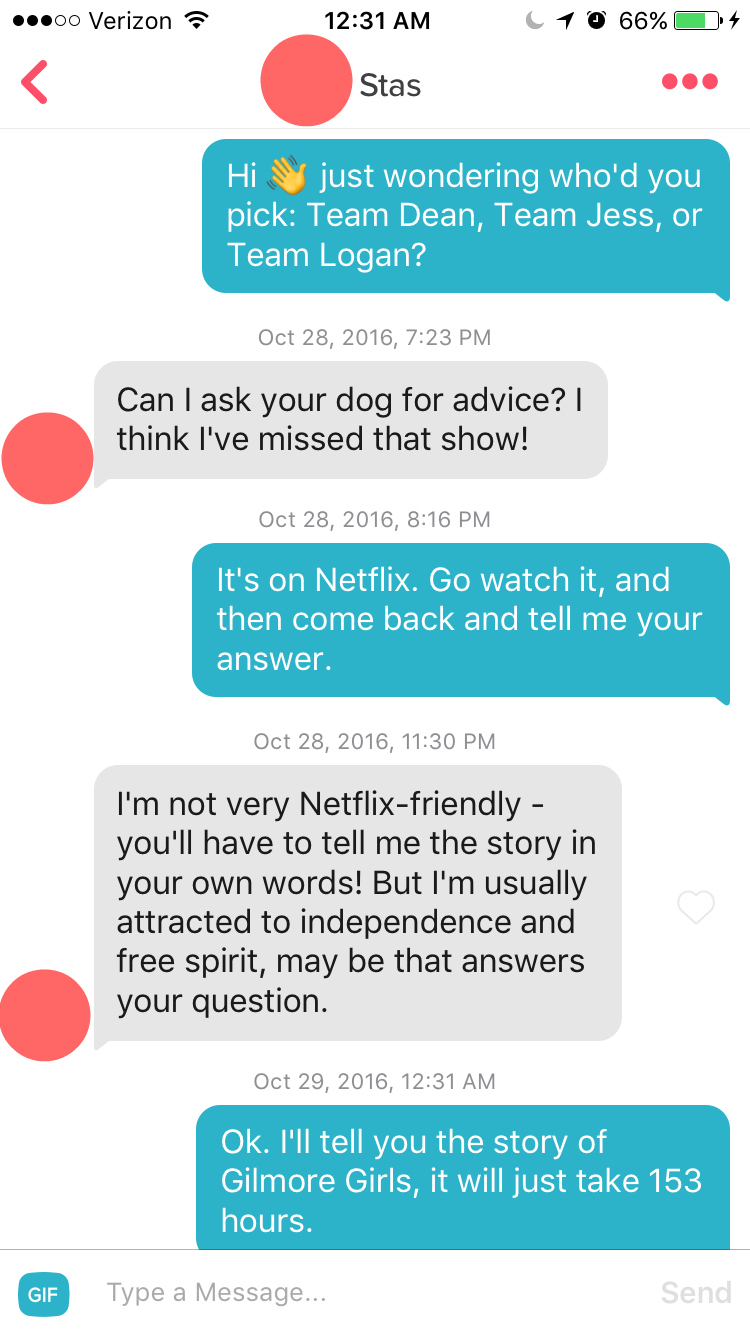 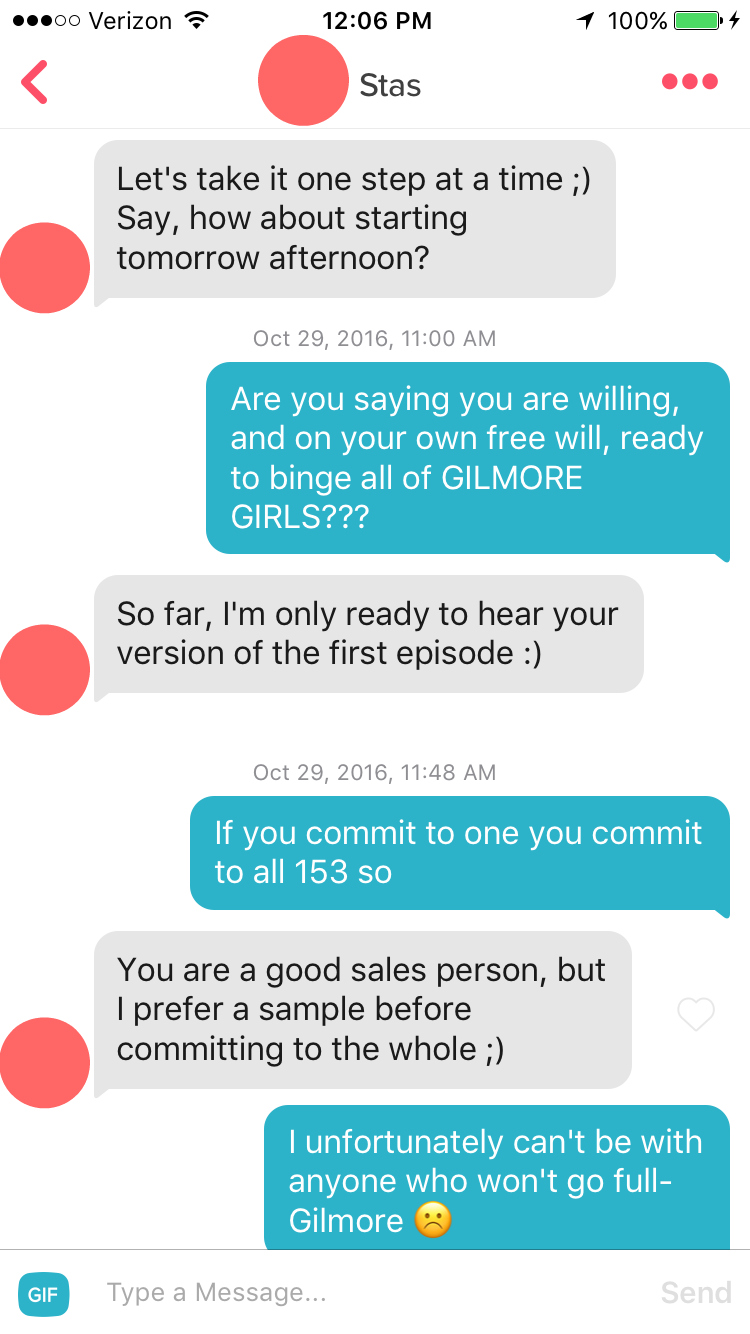 But overall, these nice gentlemen were just straight up bewildered. 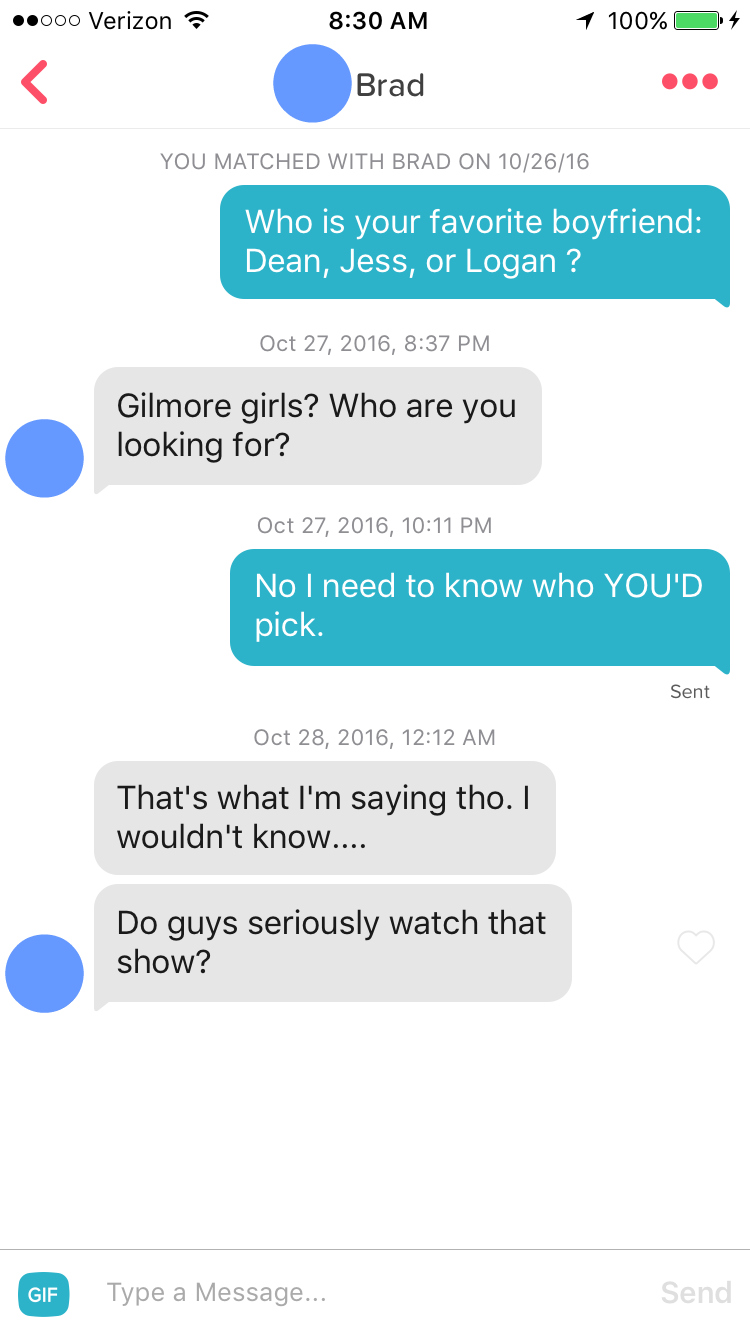 Welp, I came out here to have a good time and maybe meet some guys who really love Gilmore Girls, and instead all I got was a bunch of confused dudes, who wished their name was Dean.

I was really hoping to be able to poll these guys, and then declare that “this percentage of guys on Tinder would pick Jess!” Obviously, that did not happen. But maybe, hopefully, I just convinced some of these guys that they should start binging Gilmore Girls right now, because it’s clearly a way of life.