Before Amy Sherman Palladino created The Marvelous Mrs. Maisel, she forged Gilmore Girls. The show, which originally aired in 2000, followed me from 10 to 17 years old and quickly became a regular part of my media consumption.

One Christmas, I received the entirety of the show on DVD (at that time, there were six seasons). Every morning for the remainder of my high school career, I would watch it on a portable DVD player while I flat-ironed my hair. When the sequel miniseries A Year in the Life came out, I was loyally prepared to binge the entire nine hours alongside two girlfriends and a Gilmore-approved menu of Pop-Tarts and takeout. I’ve seen every episode at least fives times and once named my trivia team “Oy, with the poodles already!” As you can see, I’m a big fan.

So it’s no surprise that Palladino’s iconic mother-daughter duo had a major impact on my personal life—specifically, my romantic relationships. Media impacts how we view and shape our society, especially the kind of programming we consume in our formative years. And while some of the content I’ve watched has warped my perspective on some things, Gilmore Girls was different. Rory and Lorelai Gilmore certainly made mistakes, but their approach to relationships was grounded, authentic, and relatable.

Below are just some of the ways this show has prepared me for romantic relationships.

It’s okay to walk away, even if you don’t know why.

Season 1 starts off with Lorelai embarking on a relationship with Max, the sexy English teacher from Rory’s fancy prep school. Despite proposing to Lorelai over the phone, Max was a solid boyfriend—he was kind, responsible, smart, handsome, and charismatic. Rory liked him, Lorelai’s friends liked him, and the audience arguably liked him. When Lorelai and Max got engaged at the end of Season 1/beginning of Season 2, everyone was happy.

And yet, Lorelai couldn’t dismiss the feeling that something didn’t feel right. The night of her bachelorette party, Lorelai realizes that she can’t marry Max, despite all of the wonderful things he brings to the table. She ends up breaking off the engagement and walking away from someone who, on paper, may have been a good match for her. This was a wonderful nugget of advice: Don’t just be with someone because you believe you should. Lorelai taught us all that even if a relationship seems like a match made in heaven, it’s important to listen to your gut and to connect with yourself to truly understand when something isn’t working.

Sharing similar values with your partner is essential.

Rory’s romantic life commands a pretty decent chunk of the Gilmore Girls storyline. Her three major relationships were with her first boyfriend, Dean; bad-boy Jess; and college boyfriend, Logan. Logan, who came from a wealthy family and had an affinity for drunken, law-breaking shenanigans, was by far the most serious of Rory’s boyfriends. He seemed like a pretty likely candidate for a long-term partnership.

Still, I think everyone was a little surprised when Logan popped the question in the penultimate episode of the series. It was a loaded proposal—accepting would have meant Rory would have to follow Logan to San Francisco because he wasn’t willing to do long distance. Rory wanted to travel the world as a foreign correspondent, and take her sweet time journeying into matrimony, but Logan wanted a wife. Despite being very much in love with each other, their clashing of values and opposing timelines made them incompatible, so the two broke up shortly after Logan’s proposal. Rory ended the series on her own, illustrating that love sometimes isn’t enough, and that’s okay. Because while there’s nothing wrong with following a significant other to a new town, you never want to do it if you have to sacrifice your values or goals.

I didn’t fully understand Gary Chapman’s love languages until my early twenties, but once I did, it became very apparent that acts of service was one of Luke’s. We see examples of this throughout the entire series—Luke is constantly helping Lorelai with the upkeep of her house by performing various degrees of maintenance and providing her with daily (and possibly free?) delicious meals. In episode 11 of Season 5, Luke builds Lorelai an entire backyard skating rink in order to help her rekindle a positive relationship with snow. It takes Luke a long time to verbally express his feelings toward Lorelai, but his primary way of expressing love, aka his love language, is through acts of service.

Understanding someone’s love language is an invaluable tool when navigating a relationship. We all have different ways of giving and receiving love and learning how your partner communicates their feeling is extremely beneficial to the relationship. Some people may express love through acts of service, while others go for physical touch, words of affirmation, receiving gifts, or quality time. The key is to learn both of you and your partners love languages, so you can learn to appreciate how your S.O. shows love, even if their way may be different than yours.

Relationships don’t need to end in marriage to be considered successful.

With his James Dean countenance and a copy of Catcher in the Rye in his back pocket, Jess Mariano was Gilmore Girls’ iconic bad boy. It wasn’t long after he arrived in Stars Hollow that Rory fell for his zero f*cks attitude and passion for radical fiction. Many fans, myself included, relished at their eventual reunion: Jess was misunderstood, and Rory was the only one who brought out his sensitive side. (And there are few things sexier then bearing witness to a bad boy’s vulnerability).

But while Jess was a great addition to the Gilmore Girls’ storyline, he wasn’t the best boyfriend to Rory. His breakup with her was random and immature, as he moved to California without saying goodbye. That said, he later came back and thanked her for having faith in him, as it encouraged him to actually do something with his life. When Rory dropped out of Yale, Jess gave her a harsh reality check that eventually pushed her to go back to school. While the two of them were not necessarily “meant to be,” their relationship bettered both of them.

In other words, if a relationship doesn’t “work out” (meaning it doesn’t end in marriage), it doesn’t mean the relationship wasn’t successful. Our romantic partners can make us better people and inspire us to be better versions of ourselves—something that may be hard to see in the midst of heartbreak.

The aforementioned Rory/Jess relationship was one of my absolute favorites throughout the series, but even I wasn’t able to justify a possible reunion after he ditched her to run off to Venice Beach. Two years later, Jess shows up at Yale and asks Rory to run away with him, and she repetitively says no. Though originally heartbroken, Rory didn’t let the pain eat away at her, nor did she sacrifice her own goals in order to rekindle the relationship.

While sometimes a reunion post-breakup might be warranted, I think the bigger lesson here is one of self-respect and knowing it’s possible to move on after heartbreak. I know from experience that a breakup can seem like the worst thing ever, but heartache eventually heals, which then helps us to emerge from the relationship as stronger people with deeper love for ourselves. 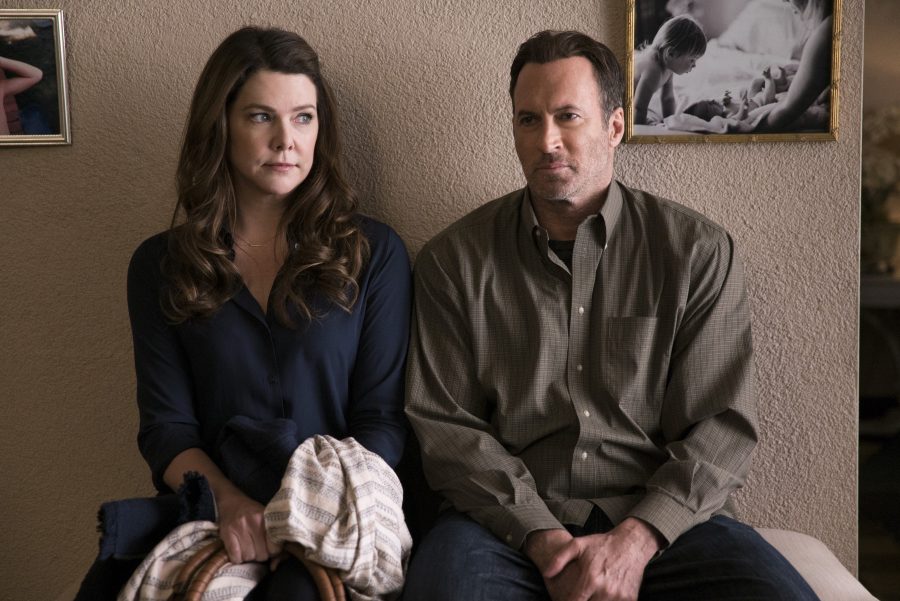 Find someone who brings out the best in you.

It’s impossible to scan the Gilmore Girls’ relationship history without talking about Paris and Doyle. Though the two (much to fans’ disappointment) were going through a divorce in the series’ sequel, their early years were a prime example of #relationshipgoals.

The thing is, the two seemed to effortlessly complement one another—Doyle was able to soothe Paris’ neurosis with his unwavering love and support, and they supported one another’s dreams and passions without a moment’s hesitation. When they moved into a seedy neighborhood, they took up Krav Maga and sneaked hugs and kisses in between attacks. Rather than letting moments of struggle defeat them, the two raised one another up and both became better people in one another’s company.

Whether it was because Rory’s parents were high school sweethearts or simply possessed undeniable chemistry, Lorelai and Christopher were one of the most iconic Gilmore Girls’ couples. Similar to Lorelai and Luke, there was a constant “will they or won’t they” energy circulating the two’s relationship—so much so that when Christopher and Lorelai got married, many of us wondered if that was how the series was going to end.

But major spoiler alert: they split up for good when Lorelai realized she was, and had always been, in love with Luke. While Christopher and Lorelai had over two decades worth of history and a baby together, that didn’t mean they were right for one another. I think about this often—while it’s tempting to romanticize the history you share with another person, it doesn’t necessarily mean you are a good fit for one another. Paths cross, and they can cross for years, but that’s not always a reason to be or stay with a person, especially if it doesn’t feel right.

Choose someone with a shared vision.

There are many reasons to celebrate this iconic Gilmore partnership, but one of my favorite reasons is Emily and Richard’s commitment to sharing a vision. The two both value their social obligations, Richard’s career, travel, knowledge, and family’s well-being. And while some may argue that Emily was purely serving Richard (a point that deserves a separate article), the broader point is that the two had similar plans for their lives with one another, and that’s all that mattered.

Many couples therapists argue that a shared vision is essential to a healthy, long-term relationship. It’s the mission statement of your union, and how you intended to perceive your time together. It answers the questions, “Why are we together? What will we do for another, and how will we do it?”

Despite occasional bumps in the road (Emily and Richard separate at one point), this Gilmore couple wins for sharing similar values, which helps them establish a future that satisfies both of their needs.

Gilmore Girls was more than a series of soothing nonsense that kept me company alongside a plate of microwave nachos—it was a lesson in love and life. Though Rory and Lorelai made many mistakes (who hasn’t?), their relationships, breakups, and recoveries illustrated some big and beautiful lessons that I still find applicable. And at the end of the day, there’s only so much we can know when it comes to relationships because just like what Rory says to Lorelai, “Every relationship is just a big honking leap of faith.” That’s, perhaps, one of the best lessons of them all.