15 things we know for sure about the “Gilmore Girls” revival

When rumors of the Gilmore Girls revival hit the Internet, fans everywhere went crazy. If you were following the series, you knew that while Season 7 ended on an okay note (ie: no real cliffhangers) it wasn’t a truly satisfying note — especially since original showrunner Amy Sherman-Palladino peaced out after Season 6 wrapped up, failing to reveal the “four last words” that she had planned to end the series with from the very beginning. (Supposedly it’s a dialogue, and not just four words spoken by one person.)

Thankfully, these rumors became a reality this February, after deals were sorted and scripts were written. Filming officially started on February 2nd, and breaking news about the revival streams in daily. Obviously, super-fans just can’t get enough.

Here’s what we know so far.

1. The revival will be broken up into four specials.

The show isn’t getting a full season. Instead, they’ll be getting four hour-and-a-half long mini-movies, each named after a particular season. We’ll be starting off with “Winter,” and the final installment will be “Fall.”

2. Almost all of the cast will be back.

Obviously, Lauren Graham and Alexis Bledel will be reprising their roles as Lorelai and Rory. We’ll also be getting all of Rory’s significant boyfriends back, although it’s not certain she’ll be dating any of them.

It was originally stated that Melissa McCarthy, who played everyone’s favorite chef Sookie, wasn’t invited back (or, couldn’t negotiate a deal.) Sherman-Palladino had an interview with TVLine that stated “The thing I have said [to her team] is, ‘Look, if Melissa is available and has an afternoon free, I’ll write her a scene. Melissa was one of us. If she has a spare moment to run over [to the set] — even if for just a cameo — we would be totally game.”

But then Melissa McCarthy went on record to say she actually wasn’t invited back to the show.

BUT. But. This gorgeous selfie with fellow Dragonfly Inn employee Michel (Yanic Truesdale) may be a hint that they ended up working something out.

3. Richard’s death will be mentioned in “Winter”

Fans of Gilmore Girls had heavy hearts on the last day of 2014, when it was revealed that Edward Herrmann, who played the impeccably dressed, always sweet Richard Gilmore, had passed away. It’ll be tough to see the show without him, but he’ll definitely have a mention in the revival. They’ve said that Emily will be an absolute ball of nerves over the loss, which is being written to have occurred just four months before the show picks up again.

4. “Bert The Toolbox” as well as Paul Anka, will be back. 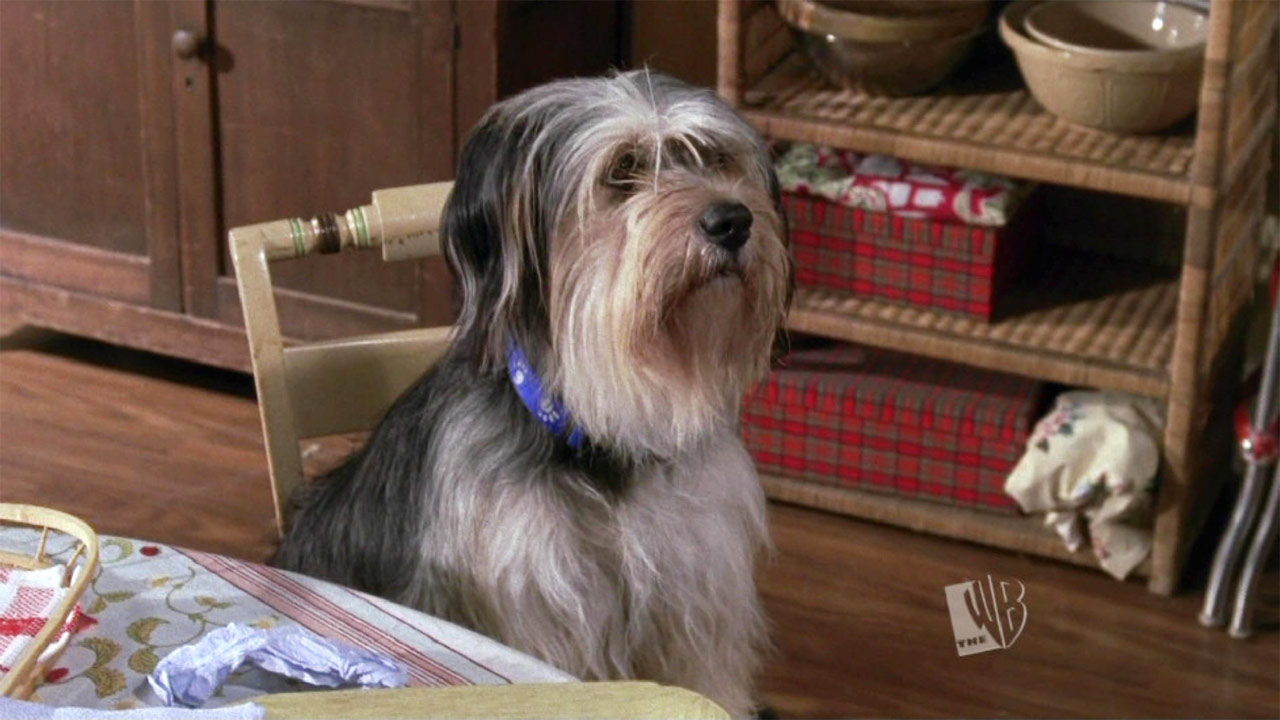 We’re lumping them in one category, since they were technically two important characters with non-speaking roles. Lorelai’s dog is alive and well (surprising, based on her history with pets) and her toolbox, named Bert, is still hanging out in the Gilmore home.

The Warner Brothers studio tour happens every day, allowing fans get a chance to visit sets. One fan in particular, Jordan McKamie, managed to spot something quite revealing in the prop storage closet — this piece of decor (which looks like a lamp? I’ve stared at it for about five minutes, and honestly can’t tell) is labeled as “wedding” on the Gilmore set.

6. There are a bunch of new cast members, including one playing “Tristan”

It’s not definite as to whether or not Anton Narinskiy will be replacing Chad Michael Murray’s role of Tristan from the Chilton days, but the two of them definitely share a few visual similarities. Other notable additions are Sutton Foster, who played a role on Sherman-Palladino’s show Bunheads, Mark Provencher playing the role of “Phil,” Hunter Wenzel, Jason Dugre, and Claudia de Vasco, who’ll be playing the role of “Clementina” (more on this later.)

7. Luke’s and Doose’s are still up and running.

Based on the economy, this is a great sign. We’re so glad that Stars Hollow likely doesn’t have a Starbucks yet, and we’re still embracing the concept of Mom and Pop businesses. But, who knows if Luke’s will still be run by Luke? After all, his daughter April (played by Vanessa Marano) is definitely on the list of people returning to the Hollow.

Even though Sherman-Palladino had nothing to do with it, she’s not forgetting that it ever happened in the first place. Luckily, her vision of the show wasn’t totally destroyed by the plotlines created by David S. Rosenthal, who had some big shoes to fill. “The good thing about Season 7 is, it didn’t take certain story elements from me that I would’ve wanted to play,” Sherman-Palladino said in an interview with TVLine. “We had to sort of catch up on Season 7. We did a lot through asking our friends who are obsessive Gilmore fans and have watched every moment to talk us through what happened.”

9. Each script is “Lauren Graham Approved.”

It sounds lame, but having the actors on-board is such a monumental feeling for fans. “I was completely satisfied with these scripts. It’s what I hoped it would be,” Graham said to TVLine. As someone who hinted at being dissatisfied with the way things turned out during the show’s initial run, this is exactly the news we want to hear.

10. Clementina is (likely) the nanny to Paris and Doyle’s kids.

Paris (played by Liza Weil) and Doyle (played by Danny Strong) were a solid couple who met all thanks to the Yale Daily News. Finally, Paris found someone who leveled her out a little bit! As noted before, Clementina was added on as a Nanny. In the casting notices, it was mentioned that this character would be Portuguese. As Paris was famously raised by a Portuguese Nanny, it makes sense that she wanted to continue the tradition. Based on the episode where Doyle gets sick and is taken care of by Paris’s infamous nanny, it’s obvious that he’d want to have a similar strong woman looking after his own children. Remember this exchange? “Paris, no offense to Nanny and her magic healing balm, but when I came over here I thought you would take care of me.” “I am taking care of you. I brought you Nanny.”

11. Kathleen Wilhoite, who played Luke’s sister Liz, will not be back.

After Melissa originally tweeted that she wasn’t involved with the revival, Kathleen fired back with a supportive response. As Kathleen was in her fair share of episodes, I wonder what the different reasons were.

12. A piglet is set to appear in an episode

Only in Stars Hollow, am I right?

13. The Life And Death Brigade will be back.

In Omnia Paratus! Alan Loayza, who played Yale’s Colin McCrae, confirmed that there’ll be a Life and Death Brigade scene with a ton of the crew, including Alexis and Matt together again.

Note that this tweet was sent at almost 1 AM. We guess The Life and Death Brigade is still keeping college hours.

The blue hat was a gift from Lorelai, so fingers crossed that the return of the blue hat means a return for the two of them as a couple.

15. Speaking of Luke, his truck has been seen outside Lorelai’s house.

Unless it accidentally broke down in her parking lot, we think it’s safe to say that some sweet Luke and Lorelai scenes are to be expected in the revival.

Who has two thumbs and can’t wait to binge the entire thing? US.