Calling all Team Logan fans: we’ve got some juice on the hunky Gilmore Girls character that might surprise you.

In fact, Gilmore Girls creator, Amy Sherman-Palladino just opened up about the reasoning behind Rory dating Logan in college and it has to do with Christopher.

Throughout the seven seasons of Gilmore Girls, Rory Gilmore, played by Alexis Bledel, had her fair share of suitors including the main three of Dean (her first love), Jess (her bad boy and our personal fave) and Logan (her college sweetheart).

All the men who came in and out of her life were very, very different but there was a specific reason that Rory dated Logan Huntzberger, played by Matt Czunchry, in the first place and it is all about her father, Christopher Hayden, played by David Sutcliffe.

"We wanted Rory to date her father," Sherman-Palladino told Entertainment Weekly about Logan. "Every girl has a father issue, and Logan was Christopher." 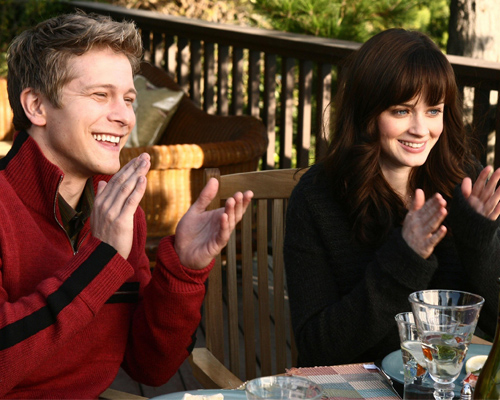 Okay, while dating your dad sounds a little creepy, we totally get what Sherman-Palladino means. Logan was the preppy, wealthy, stereotypical rebel, with a trust fund to back him up, guy that Chris was for Lorelai and it could be the reason they broke up at the end of the series. Since Lorelai and Chris never worked, Rory and Logan could’ve been doomed from the start.

"Logan was charming, smart, and not quite the dependable soul that you need. Or, at that time, was not the great dependable soul," the show's creator added.

Bledel revealed that it really was a mirror image to her character’s mother and father’s young romance.

"It's a relationship like the one Lorelai and Christohper had in their youth. They do reckless things together," she told the publication. "It's fun but on this lavish scale."

"I saw this character as somebody who is going to push Rory to be the best that she could possibly be in her personal and her professional life, and to live life in this kind of carpe diem way," Czunchry told EW.

"For example, there was an episode called 'You Jump, I Jump, Jack,' where we saw the first glimpse of who Logan was and how he tried to push Rory. That's always the way that I came at it."

We might be Team Jess, but Logan did push Rory and take her out of her comfort zone. Plus, who wouldn’t want a BF who could take you all over the world at the drop of the hat?

Tune in on Nov. 25 to see what happened to Rory and Logan in Netflix’s Gilmore Girls: A Year in the Life.