No Ghostbusters movie would be complete without an Ectomobile!

Naturally, to go along with the Ghostbusters revamp there’s a new and improved Ectomobile, which was prominently displayed in the film’s first trailer. I’m relieved to see the car is still a vintage Cadillac!(Had it been a Tesla I might have reacted like an angry Stay Puft Marshmallow Man.)

The Ectomobile isn’t just prominently featured in the trailer– we get a complete origin story. According to the trailer, Leslie Jones’ character borrows the show-stopping Caddy from an uncle. 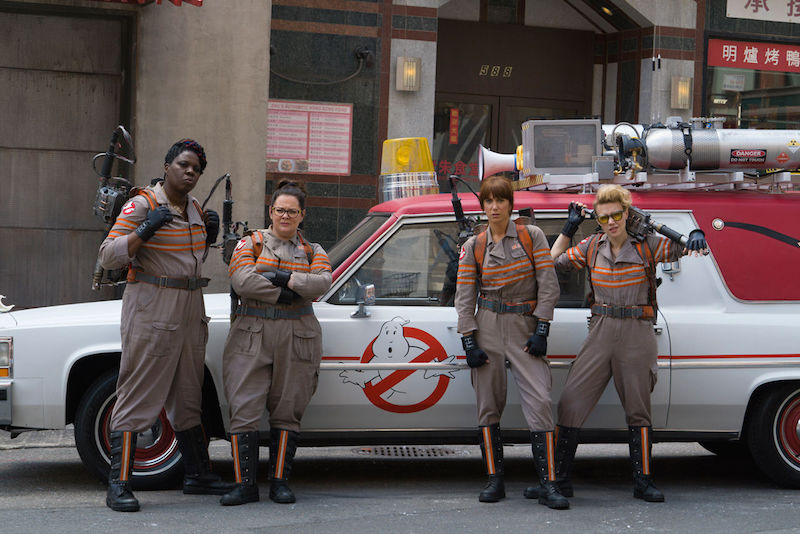 According to USA Today, here’s why director Paul Feig and screenwriter Katie Dippold just had to have their version of the original 1984 Ghostbusters mobile (complete with the Ecto-1 license plate) in the new film:

1. Fans would have revolted without it

He’s right. We would have.

“Katie and I were like, ‘What would we be bummed not to have if we were Ghostbusters fans, what would we need to see in this movie. The top of the list was the Ecto-1,” Feig said.

While he didn’t want to use the same exact one in the reboot, he kept the basic idea.

The Ectomobile in the 1984 original is a 1959 Cadillac. The new Ectomobile is a 1993 Cadillac hearse, which came out four years after Ghostbusters II. In 2016, this car will certainly be considered old— or, some might say, retro.

2. Perfect storage for all that busy Ghost-busting

When you are carrying around proton packs to battle ghost emergencies, a spacious hearse design is perfect.

“I just really wanted it to be rigged out so it was clear it held their equipment properly,” said Feig. Makes sense. Can’t fault the man for common sense.

3. Nothing says low-rent like a hearse with a big yellow siren

The new Ectomobile makes one heck of a statement. The film’s production designer Jefferson Sage and team added the giant yellow siren which was scavenged off a boat to make it car even more over-the-top.

“Originally, I thought it should be a smaller siren,” Feig explained. “But this shows they are scavenging pieces. I really want this to have a garage band feel to it. That’s the power of the original Ghostbusters.”

From J.J. Abrams’ Star Wars: The Force Awakens to The X-Files to this new Ghostbusters, fans demand their cultural touchstones in these franchise reboots. To reassure these fans, Feig opens the trailer with a scene surprisingly similar to the opening scene from the original.

“We wanted to plant a flag early. People don’t know what this movie is,” Feig said. “It’s a whole different team. But it’s kind of fun leading off with something iconic from the original.”

There are many icons returning to the franchise. Bill Murray, Dan Aykroyd and Ernie Hudson all have cameos. Slimer will make a ghostly appearance. Rumor has it that other stalwarts of the franchise will be revealed. So of course the Ectomobile had to be there, too!

Ghostbuster fans recently saw the new Ectomobile on display at the Sony Lot for a massive fan event. Their response was incredibly positive. Considering how picky fans can be, this is a good sign!

I, for one, cannot wait to see the Ectomobile in action when the movie premieres July 15th.