Whoa, did this lady just see the ghost of Lizzie Borden in her mirror?

Whether or not you believe in ghosts, when you look at the photo below, you may become a believer.

You’ve probably heard of Lizzie Borden, but ICYMI, she’s the woman who, in 1892, was tried and acquitted for the axe murders of her father and stepmother. Well, when artist Joanna Parent stayed at the Lizzie Borden Bed & Breakfast, and walked into the very room where Lizzie’s stepmother was killed (!!), she took some pictures… and a month later, she saw a figure in one of them that hadn’t been there before. 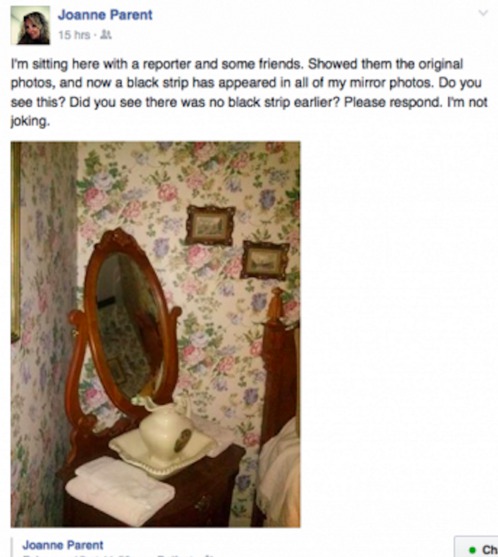 “You can clearly see the outline of something, like the form of a woman wearing a hood,” Parent said to the Penobscot Bay Pilot. “I showed them to my sister and her husband. I was like ‘Oh My God,’ look at this.”

Just imagining staying at that B&B gave me chills, not to mention Parent’s pictures.

“Last year, Donald invited my sister and I to go down to visit and stay in one of the rooms, and I ended up staying in the room of Andrew Borden,” Parent said. “The house is super creepy, so I took tons of photographs as we walked around. I was getting a weird vibe, like something was just wrong… I was so creeped out to actually go into Abby’s room, so I just reached my arm around the door frame and snapped a bunch of photos.”

If you want to get even more freaked out, this room is the “most requested room,” said Martha McGinn, who once owned the house.

There is also a black bar in Parent’s photo that seemed to “appear” between the time Parent posted it on Facebook to when she showed it to news reporter Kay Stephens of the Penobscot Bay Pilot.

“Twenty-four hours later in the midst of the interview, they just suddenly appeared in her iPhoto library and on the posted Facebook photo,” said Stephens. “Thinking it was some technical glitch that tampered with them, we showed the photos to Aaron Sarnacki, owner of Archangel Computers, who said the photos weren’t corrupted and there was no way an image can just appear in a photo. Further he confirmed there are no linkages to Facebook from an iPhoto account that could change a photo once it was posted.”

So. Eerie. Parent’s friends who’d commented on the photo said there hadn’t been a black bar in it initially.

“It’s an old, old mirror,” said Lizzie Borden Bed & Breakfast co-owner Lee-Ann Wilber. “People think they see stuff in it all of the time… Depending on how you’re standing, you won’t see any anomalies in the mirror unless you take the picture from an angle. We’ve had plenty of pictures that were taken several years ago that can’t be explained, however, by a gentleman by the name of Glenn Teza, a psychic and spiritual healing teacher from New Jersey. His photos show a mist figure and were taken with Instant Polaroid film and there is absolutely no way to mess with that film.”

Wilber said the bar is a reflection of a ceiling vent; hence, the picture probably did not transform itself. But, as someone who believes in ghosts and has had several paranormal experiences in her L.A. apartment, I’d side with Parent on this one—especially given what happened at the Lizzie Borden Bed & Breakfast.

“I’ve been invited back to the house to paint the rooms, but I’m not sure I want to go now,” Parent said. I don’t blame her.