Another day and another Game of Thrones theory abounds to keep our thirst quenched! While Season 6 of Thrones satisfied us in oh-so-many ways, it also left us with a million and one questions, AS PER USUAL.

And one of those big questions was, “WHO WILL SAVE SER JORAH?” 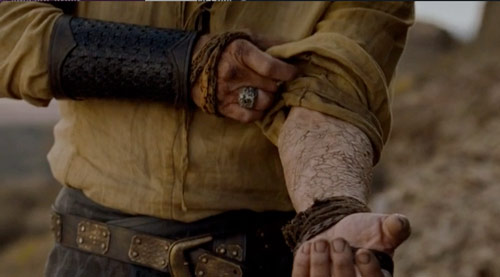 Because the last time we saw Dany’s biggest fan, he wasn’t doing so hot. If you recall, in Season 6, Episode 5, “The Door” (YEAH, it’s been that long since we saw Jorah) Daenerys commanded Jorah to find a cure for his increasingly disastrous greyscale condition.

And while Jorah has no idea if it can be cured, one clever Redditor, HouseHeisenb3rg, thinks there may actually be a character that can help him, and it’s a character we’ve already met. Let’s jump WAY the heck back to Season 2, where we met… 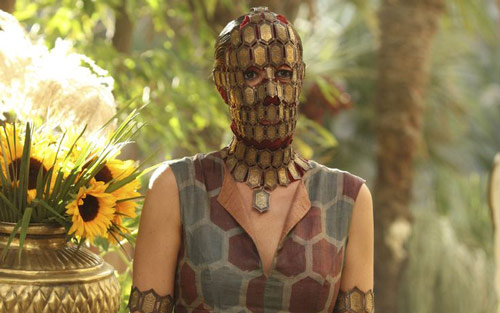 Back in Season 2, Episode 5, “The Ghosts of Harrenhal”, we first met this mysterious woman when Dany and co were hanging out in Qarth (remember, the place where Dany’s dragons were stolen as babies?). And while Jorah (and ourselves) had no idea who this masked-woman was, she clearly knew who everyone else was…and perhaps most interestingly, she knew exactly who Jorah was. 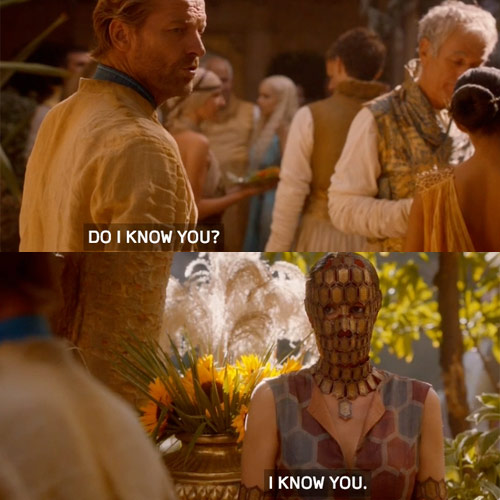 This Reddit theory points out that “there is only ONE person in the entire series who has mentioned/hinted/showed they know about ANYTHING regarding the treatment/prevention of Greyscale. This person is actually treating someone who is about to travel past Old Valyria where Stone Men and Greyscale thrive. […]And that person is Quaithe.” 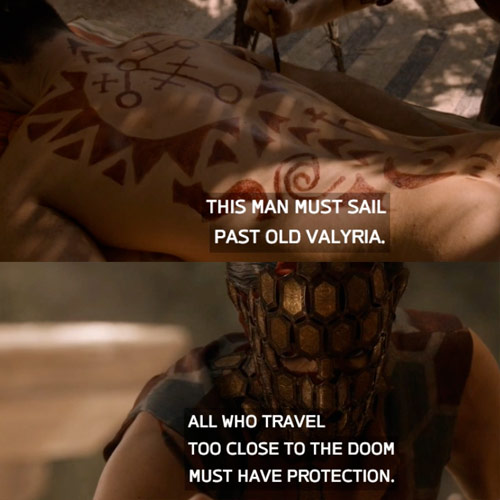 In this above scene, which is actually from Season 2, Episode 7, “A Man Without Honor,” Quaithe chats with Jorah again, and mentions as kind of an aside, that the man she is painting (presumably with some kind of protection spell), is heading to…

OLD VALYRIA, aka, the place where Jorah contracted greyscale! 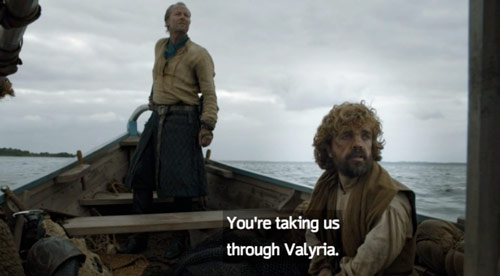 In Season 5, Episode 5, “Kill the Boy,” Jorah takes Tyrion on a reckless boat ride through Old Valyria to get back to Daenerys. And if you remember, they encounter some not-so-pretty Stone Men, who put up a good fight, and ultimately infect Jorah with greyscale.

So, could the answer to Jorah’s problem really lie with Quaithe? She more than likely has some kind of magical powers since she’s from Asshai (where Melisandre is from) – note the design similarity between Quaithe’s mask and Melisandre’s age-defying necklace. And she obviously knows something about greyscale prevention. 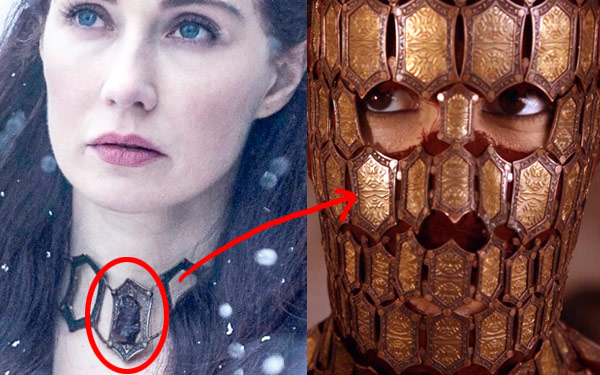 And this Reddit theory also reminds us that according to Stannis, greyscale is SUPPOSEDLY curable, so…

If Quaithe’s powers are as strong as Melisandre’s, then we’d say Jorah has a FAIR SHOT at making a full recovery. And that would be GREAT, because we’d like to see him back at Daenerys’ side (and hopefully for him, AS A LOVER, and not just a pal this time around).

YOU HAVE YOUR ORDERS JORAH! NOW GO, FIND QUAITHE!