That’s right: The newest Game of Thrones teaser is out, and it’s a doozy. First of all, the entire thing takes place in the Hall of Faces at the House of Black and White, so it starts out pretty ominously from the very beginning, and just gets more unsettling from there.

The clip pans across the faces of the characters we’ve lost with eery soundbites from them echoing in the background. It starts with those we know are dead: Eddard Stark, Robb Stark, Joffrey Lannister, and Catelyn Stark. Then, it moves to someone we’re not so sure is (actually, really) dead: Jon Snow. . . but his soundbite (“The long night is coming and the dead come with it”) implies that maybe, just maybe, he’s alive. However, since this is a room filled with faces from skinned corpses, maybe that’s hanging onto our hopes a little *too* desperately.

But then, the final shot is like a PUNCH TO THE GUT. It’s like we watched “The Rains of Castamere” all over again, because suddenly, we see the faces of what looks to be Sansa, Tyrion, Daenerys, Arya, and you know, anyone you could ever care about, because life is a lie and you can never get attached to characters or George R. R. Martin will smite you where you stand. 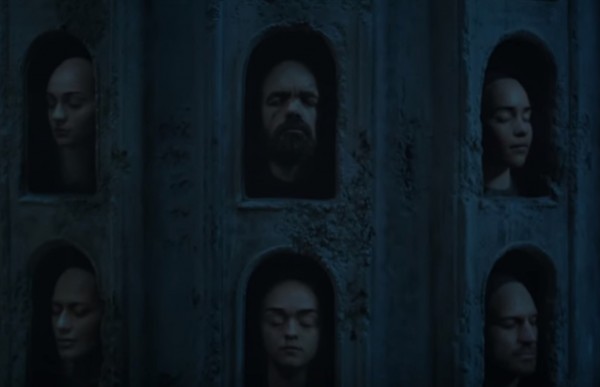 Anyway, happy Monday! Here’s the heartbreaking clip, and we’ll be over here in a state of denial until we can (hopefully) get some answers on April 24.