Cersei dropped a HUGE bombshell on Jaime, and the Lannisters might never be the same on “Game of Thrones”

While the most recent episode of Game of Thrones saw fewer people torched to a crisp, it was an episode full of more reunions and important revelations. If you haven’t seen “Eastwatch” just yet, this is where we must part as the post ahead is dark and full of spoilers.

Between the long-awaited return of Gendry, the Suicide Squad heading beyond the wall, and Gilly’s big reveal, it’s safe to say that there was a lot going on last night. But in an episode of quiet bombshells, Cersei Lannister refused to be left out and dropped a bomb on Jaime that has us thinking it might signal her eventual downfall: She’s pregnant.

That’s right, Queen Cersei revealed to Jaime that she’s pregnant with his fourth child — only this time, she’ll publicly call him the father — and with that, it seems the Valonqar prophecy is set in motion.

In order to fully understand what this all means, we need to recall a flashback from Season 5, depicting a teenage Cersei visiting Maggy the Frog, a wood witch in Casterly Rock, to learn about her future. Maggy revealed that Cersei would marry the king, become queen but later be cast aside for a younger queen, and have three kids, whom she would outlive. We know each of these predictions have come true but in the books, Maggy reveals another prediction: “When your tears have drowned you, the valonqar shall wrap his hands about your pale white throat and choke the life from you.”

There is a lot to unpack here. Since the flashback in Season 5, we’ve been wondering how Cersei would meet her doom at the probable hands of Valonqar (which is High Varyrian for “little brother”). The most probable theory has been that one way or another, Jaime would be Valonqar, with Tyrion falling at a distant second.

Now that we’re all caught up to speed on the Maggy the Frog background, let’s get into Cersei’s pregnancy and the serious implications it has for her future. Maggy was pretty clear that Cersei would only have three children — Joffrey. Myrcella, and Tommen — and Cersei has just revealed to Jaime that she’s pregnant with his fourth child. Prophecies are super cryptic and metaphorical, though, so it wouldn’t surprise us if Cersei wasn’t actually choked to death. As so many characters on the show, Cersei could die during childbirth and Jaime would probably feel responsible, fulfilling the prophecy. Or, she’ll die before she gives birth — either way, we know she’ll only have three children.

But there’s always the chance that she isn’t actually pregnant. Cersei announced her pregnancy to Jaime after he secretly met with Tyrion, the brother she loathes (even though Jaime admitted that he wasn’t responsible for Joffrey’s death). Jaime has also begun to doubt Cersei, certainly implying he no longer believes they’ll actually win the war. But his sister certainly doesn’t have time for his wavering faith. Cersei is cunning and will do anything to stay on the Iron Throne, whereas Jaime’s pretty easy to read. It wouldn’t be surprising if she’s playing on his belief in family and honor above all else to ensure his utmost support, once again. Adding that she’d publicly call the child his is just the icing on the cake and Jaime immediately drops all doubt (once again, because he’s so easy to manipulate).

It’s this look that has me shook: 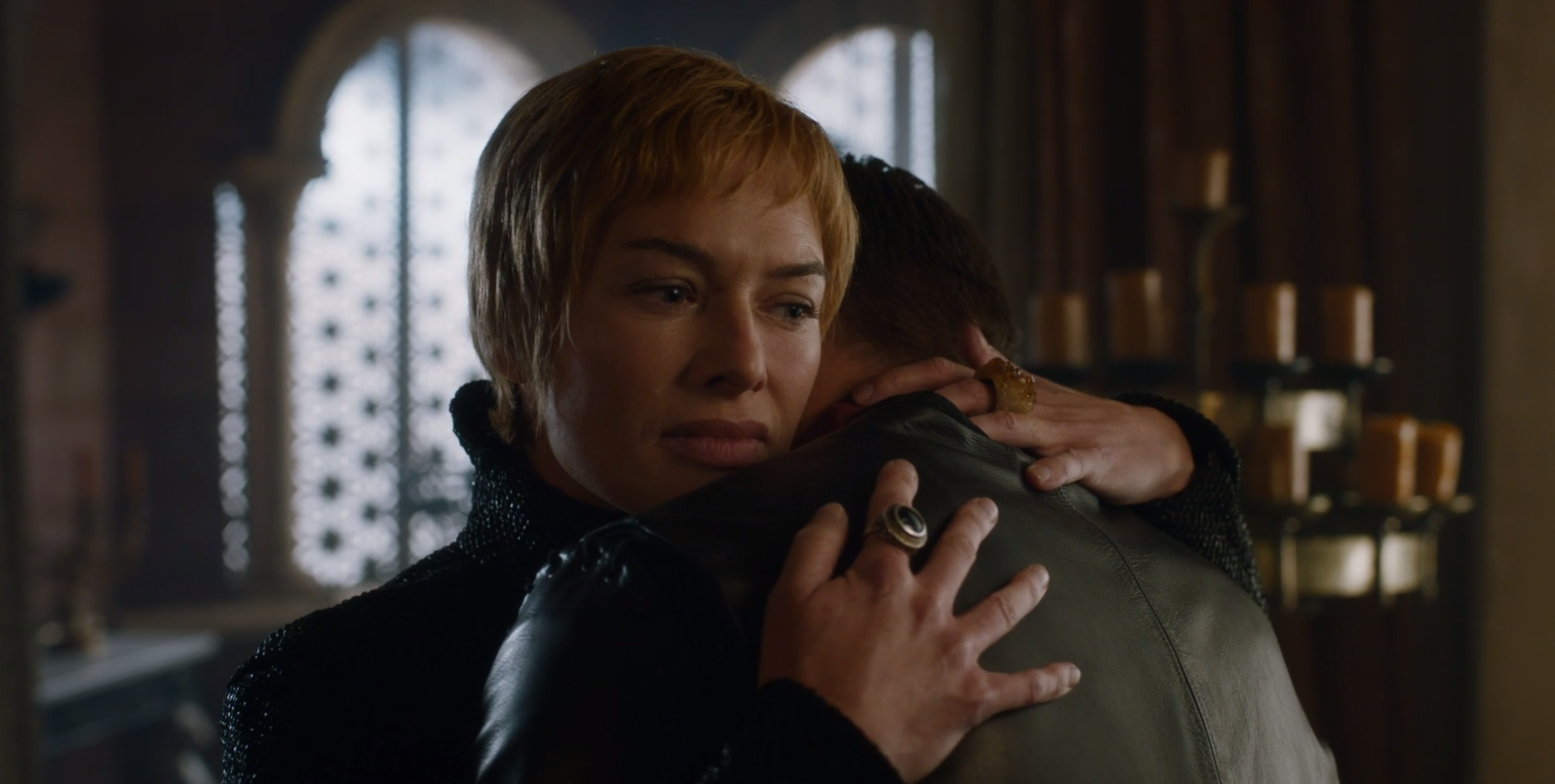 But if Cersei *is* lying to Jaime, make no mistake, he may finally snap and fulfill one of the *many* theories surrounding their mutual destruction. With only two episodes left of Season 7, it seems that we may just have to wait until Season 8 for the potential Cersei/Jaime showdown.