Over the past few years, pals and creative partners Gaby Dunn and Allison Raskin have attracted a huge online following. After writing, directing, and appearing in some of BuzzFeed’s greatest videos, the two left the platform to start their own YouTube show, Just Between Us. Raskin and Dunn dish out funny advice, perform in comedy sketches, and share their experiences with sexuality, mental health, and body confidence in their weekly videos. Dunn also hosts the finance podcast Bad With Money and the pair released a comedic YA novel last year called I Hate Everyone But You.

Raskin and Dunn have started to transition their YouTube channel from solid comedy into a more personal space — a result of their busy schedules and a brutal YouTube algorithm. Last week, the duo shared a video discussing the oft-ignored side effects of common medications used to treat mental illness. Raskin discussed her recent struggle with weight gain, and shared a nasty email she received about one of their previous videos. In our digital age, content creators are often faced with an unfiltered bombardment of audience opinions.

We caught up with Dunn and Raskin to chat about mental illness, self-care, and the stuff that makes them happy. 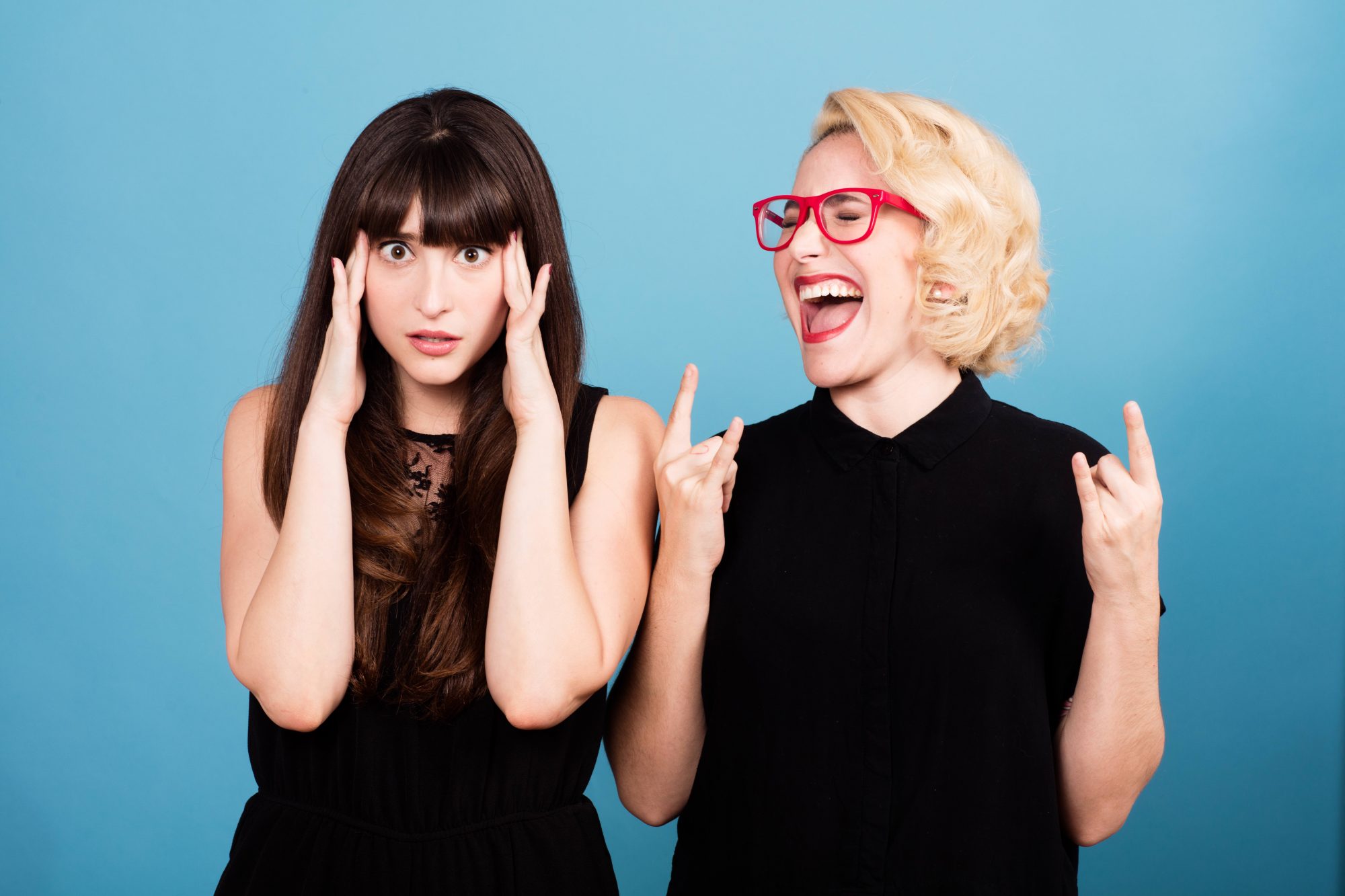 HelloGiggles (HG): Tell us more about the decision to transition your content from straight comedy to more unscripted, personal videos.

Gaby Dunn (GD): Since the beginning of Just Between Us, Allison — who is more into scripted — has sort of insisted on it being more planned out. But with YouTube, you also need to be willing to be vulnerable with your audience. I felt, and the audience felt, that we owed it to them to share more of ourselves if we were going to be a little busier with other projects. I’m sure she would agree to this, but the actual format of YouTube, Allison has never been interested in. The whole “like, comment, subscribe” thing, we’ve never done. I think that’s been to our detriment, but I’ve always wanted to have more of a dialogue with the audience. It lets you mix in comedy with more genuine stories and authenticity. I think that’s what the YouTube audience likes better. Allison, especially, has so many things that are worthwhile to share, but it’s scary to be vulnerable on the internet. Her idea to talk about the weight gain and medication was huge, and I was really happy that she did it.

HG: What pushed you to be more open with your personal life on the internet?

Allison Raskin (AR): I don’t feel like I’m becoming any more open, I feel like I’ve been pretty open the whole time. I think now I’m just willing to go more in-depth with it without there being a joke at the end. I’ve written about it, but in the videos now I’m just more willing to be more serious.

GD: It took some time [for me] to filter out what is important and what isn’t important in terms of comments. When I think that they’re right, I am happy to listen to that. When it’s stuff like “your hair is ugly today” — you don’t have to listen to that!

GD: It’s more personal. When I worked at BuzzFeed, there were no credits on the videos so nobody had any idea who made what. Now [the audience] can assume that whatever is up on JBU or my personal channel, I had some hand in.

HG: Comedy can deflect mental illness, but it can also be a good outlet for it — do you have any tips for maintaining that balance?

AR: I definitely think that I developed my comedic voice as a coping mechanism for mental illness. I think that if you don’t laugh, you’ll cry. With standup, I felt like I needed to be extra-miserable. Because I was a generically attractive person, sometimes I felt like, “Oh, I have to really prove that I’m as miserable as these people” — which is messed up. I think that I am navigating towards just being a writer and creator, and focusing less on performing, which really relieves a lot of that anxiety to maintain my appearance, to look perfect, and to be a potential leading lady. I’m realizing more and more that those aren’t my main goals.

GD: Nothing I do happens in a vacuum — what I make is all stuff that people can criticize. You know, you put a book out and in the back of your mind you’re like, “People are giving it negative reviews on the internet somewhere.” Sometimes you’re like, “I wish I could just make this and then no one would read it!” but that’s not how books work. I’m sitting here working on a comic book now, and I’m going to sit here for an hour and stress myself out. But I woke up today and was like, “Okay, it’s stressful that you have to figure out why this character would do this thing, but also you get to have a comic book!” So it’s a good problem.

HG: What are your best tips for managing mental illness and implementing self-care?

AR: With mental illness, I think it’s something that you can’t ignore. You have to treat it like any other illness. You need to manage it and put in the work and see a therapist — if you need medication, take medication. The biggest thing I’ve learned, because I’ve been in therapy since I was four, is that you just have to be kind to yourself. That will be so much more beneficial than anything else. It’s okay to be upset, it’s okay to be anxious, it’s okay to have these hurdles, but just don’t beat yourself up about it. Find little mantras that work for you. “I am safe, I am physically safe.” Repeating that helps. And sometimes when things are overwhelming, I’ll think, “Well this is insane, but at least it will be good material.”

"The biggest thing I’ve learned, because I’ve been in therapy since I was four, is that you just have to be kind to yourself."

GD: I like to change how I look all the time. I just went and got a box of black hair dye on Saturday, and a couple friends came over and my sister and my girlfriend, and while we were talking, I just dyed my hair black. I was like, “Sure, why not, it’s like 12 bucks!” I think sometimes it helps to feel like you have some control over your life by just drastically changing how you look every few months. I can’t control when my editor is going to get my notes back, but I can control that my hair is black now!

AR: I’m so terrible at names, but Zoe Lister-Jones! I think what she’s done is really cool. Anyone who is doing a bunch of different things is really intriguing to me. Also, the creator of Fleabag, Phoebe Waller-Bridge — she’s amazing. Anyone that’s sort of a multi-hyphenate.

HG: Gaby, I saw that you’re a Law and Order: SVU fan, and I hear that you have a Carisi crush. I’m bringing this up because, man, I’ve been down that path.

GD: Oh yeah. It’s such a dark road because Law and Order is depressing. Someone explained it to me in the funniest way and they were like, “It’s so good for depression because it’s essentially a fantasy show where the police care about rape victims.

HG: And it’s so satisfying to watch Olivia Benson kick a man’s ass in every episode!

GD: Yeah, and there’s a group of people who care about rape victims, which is probably as fantasy as Game of Thrones. Like, it’s Game of Thrones for women! I also just flew through season one of Search Party and it’s very good. John Early is just incredible. It has everything and everyone you would possibly want. I enjoy The Good Place. That show makes me laugh out loud, which is a thing that’s hard with TV comedies. And so much SVU, because I’m a little down right now — because I also have anxiety and depression and a whole host of mental illnesses — but there’s just so much weird masculinity on that show. Like of all people, I’m into Carisi, the guy with the Staten Island accent? Really? I also like Brooklyn Nine-Nine. That’s like a tasty little treat. It’s always punching up, like — you’re never gonna get hurt by that show.

HG: What’s next for you two?

AR: The only thing I know that is going to be out in the world soon is my scripted podcast, Gossip. I’m in the thick of writing and rewriting that, and we’re going into production soon. It’s really exciting because it’s kind of like my own show! I have two different TV projects I’ll be pitching and I’m also writing a movie for a director. I try to keep as busy as possible — that helps keep the crazy away. The busier you are, the less you can think!

"I think sometimes it helps to feel like you have some control over your life by just like drastically changing how you look every few months."

GD: “I am writing a graphic novel for Boom! Studios and it’s not comedy — it’s sort of like a thriller-horror thing. I’m a big horror fan, so it will be cool to do something in a genre that I am a huge nerd for. I have a Bad With Money book slated for the end of this year that I just turned in. And season three of Bad With Money comes out in April!

AR: The reaction to the weight gain video was so moving and it really felt like an aspect of mental illness that people don’t talk about. Obviously, people are more open now about having anxiety and having depression, but the side effects of these medications can be somewhat severe. I think it’s about figuring out your priorities. For me, realizing that my priority was being happy over looking the way I wanted to look was an epiphany. I’m the most fit I’ve ever been, I’m the strongest I’ve ever been, but I look the fattest. It’s not like I’m super fine with that, but at the end of the day, you know, what am I prioritizing?

I think the more we talk about the minutiae of mental health, the more it can become destigmatized.