‘Fuller House’ photos are here, so obviously we need to analyze them

Today, Netflix gave us Second Christmas™ by releasing new photos of the Fuller House cast on set, in character. And by set, we mean in our favorite TV house of all time: the Tanner Painted Ladies-esque house in (Wake Up) San Francisco. SQUEE! Most of our faves make an appearance: D.J., Steph, Kimmy, Danny, Joey, Becky, and our collective boyfriend Uncle Jesse. Also a baby and a couple kids that probably (we’re guessing) belong to D.J. and/or Kimmy.

Anyway, the shot of all our faves together features the four original adult main characters all crammed together on one couch for some reason, in the middle of the Tanner living room we all know and love. And because we’re trying to find creative ways to pass the time until the show’s premiere on Feb. 26 (seven weeks and one day, not that we’re counting), we decided to compare the Fuller House living room to the Full House one and see if there are any clues about the revival to be found in the new incarnation of the classic space. Here’s what’s changed and what’s stayed the same in the Tanner house — and what it might mean for the show. 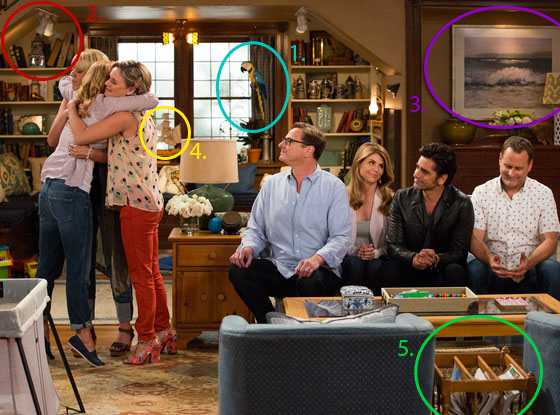 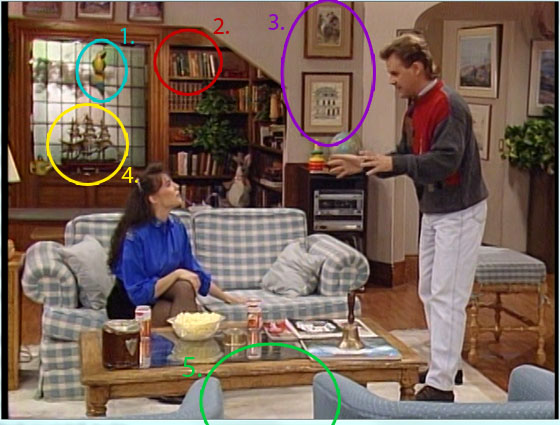 1. THE SAME: That weird parrot statue

Why are the Tanners so obsessed with this parrot? Maybe it reminds them of the Hawaii trip they took that one time, and there’s an inside joke behind it related to Danny hating parrots, but not specifying if he meant all parrots or just real ones. Or MAYBE Michelle won it as a prize at that pirate-themed restaurant where she had a temper tantrum over chocolate cake, and the two California-based Tanner sisters keep it around to remind them of her since she’s away in NYC doing fashion-related things.

Danny Tanner must have mellowed out a LOT or be having a huge internal conniption fit in the new photo, because right behind him are shelves with books that aren’t perfectly straight the way they used to be. There are also fewer tomes in general and the shelves are much more modernly decorated – a nod to the Tanner ladies’ bubbly, outgoing nature as opposed to their dad’s admittedly more rigid one?

In Full House, the living-room walls were decorated with various art pieces. But in the new photo, it looks like a large photo of crashing waves on a shore is the star. We’re wondering what the reason is behind that change. Did D.J.’s late hubby propose to her on a beach (cue all the tears)? Or is it something not heart-wrenching, like a subtle nod to Jesse’s second musical love (after Elvis, obvs), The Beach Boys?

4. THE SAME, KINDA: The sailboat

This one is interesting because the new photo shows a sailboat, but it’s a different sailboat than the one from Full House. This would seem to hint that the original sailboat itself probably didn’t hold sentimental value — or maybe someone broke the old sailboat and pulled a classic Tanner fast one and tried to replace it. We’re scratching our heads over this one, but maybe we’ll find out the significance eventually.

The magazine rack nestled in the middle of the two blue armchairs says a lot about the new main residents of 1882 Girard Street, especially when paired with the fact that there are fewer big books on those bookshelves – mainly that D.J., Steph, and Kimmy are well-rounded modern women who enjoy both a good book and a good magazine. We’d like to think D.J. is into Cosmo, Steph has a secret One Direction obsession that she quenches with the stories she finds in the pages of Entertainment Weekly, and Kimmy has found some weird niche magazine dedicated specifically to eliminating bad foot odor.

Honorable mention goes to the baby playpen, because it seems like just yesterday first-season Michelle was hanging out in her playpen in that same spot. Awww. Also, shout-out to those two blue armchairs flanking the magazine rack, because: 1. They’re ALMOST the same as the old ones, and we wonder why they didn’t at least just upholster them differently to go with the new carpet, and 2. PEOPLE ON THE COUCH: THERE IS MORE ROOM TO SIT, RIGHT OVER THERE. But then again, it wouldn’t be the Tanners/ Katsopolises/Gladstones without the whole “What’s personal space, LOL!?” aspect, so they’re forgiven. Hopefully there was at least a soothing violin playing in the background when this photo was taken.

(Images via Netflix and ABC.)