Franchesca Ramsey talks to us about her new pilot, the power of comedy, and how to deal with trolls

Franchesca Ramsey is making the world a better place, one internet video at a time. Now, the comedian and writer is taking her talents back to the television screen and simultaneously making history. Franchesca Ramsey is set to host a late-night Comedy Central pilot, making her the first black woman to host a pilot on the network. With her not-yet-titled project, Ramsey plans to create a platform for diverse comedians that addresses the terrifying political reality of today.

It’s a natural progression, considering Ramsey has already shined as contributor on The Nightly Show with Larry Wilmore, and continues to deliver perfectly succinct educational videos about various social injustices — all while being hilarious — as the host of MTV News’ weekly web series, Decoded.

We spoke with Ramsey about her new pilot, the impact of Decoded, and how to deal with those trolls.

HelloGiggles: You are the first black woman to host a television show on Comedy Central, and you’ll be doing it during a very white male-dominated time slot. What does that visibility mean to you?

Franchesca Ramsey: I think representation is really important for people across all marginalized identities. For me, just being myself, oftentimes, I’ve found it’s inspiring people just to be a woman of color, to be a woman with darker skin, to be a woman with natural hair in media. I’m just really excited to have the opportunity to reach more people on a bigger platform. 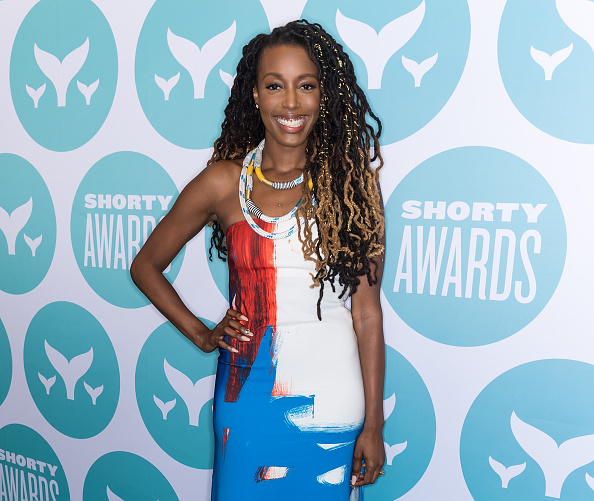 HG: Decoded also won a 2017 Webby Award for Public Service & Activism in film and video. Is there an episode of Decoded that you are especially proud of, or that has gotten the most positive responses from viewers?

FR: We’ve done so many episodes now — over 60-something episodes — but [recently] we did an episode talking about immigration and the difficulties of legal immigration. And I think it’s got over a million views now. It’s just really great — I love being able to shed light on different issues that people maybe have one perception of, and they need to see a different perspective. That’s something I think Decoded does really well. But as for a specific episode, I feel like we’ve just tried so many different things, I can’t say that I like one more over another.

HG: Can you talk about why you find comedy to be an important form of activism?

FR: What’s really cool is that there’s a phrase, “There’s truth in every jest.” And I think that can be a positive thing in terms of illuminating conversations — but it can also tell you a lot about how people really feel about things. For me, I feel like comedy is a really great way to make people comfortable when it comes to topics that are uncomfortable. I think that if you can talk about something serious with levity, you can have a greater impact on people…They’re more receptive to the information, versus if you were just talking to them in a more traditional way that didn’t have humor interspersed throughout.

HG: You have already worked in television with Larry Wilmore, and, obviously, a lot of your work lives on the internet. As a comedian and writer, what do you see as the different strengths of creating for television versus creating for the digital space?

FR: I think the biggest difference is creative control. For me, a big part of why I got into the digital space is because I was looking for opportunities and I couldn’t find them — and so I just wanted tot make my own stuff. And that definitely happens in TV, but it just takes a little bit more time. I think that the internet right now — as we’re seeing — is a great stepping stone for whatever kind of career you want to have. Whether that’s in media or in comedy, or if you are a musician or in fashion — we’re just seeing so many people using the internet to create stuff that they want, to then get opportunities on larger platforms on a larger scale.

HG: Being a public figure online means you are confronted with trolls and sexist/racist commenters on a regular basis. Are there any specific things you do to maintain your sanity when you deal with this kind of behavior?

FR: Yeah. You know, I think that for everyone — not just when it comes to dealing with negativity online or in real life — I think that self care is really important. That’s something that I really try to implement into my routine in good times, so I’m better able to handle it in difficult times. So I love going to the gym, I love to take my dogs to the park, I try to limit my online time in the evenings. And taking a step back when things do get really negative in online spaces is really important, but I think that making sure that’s part of your creative process on a regular basis definitely makes it easier in those challenging times.

HG: When you were beginning your career, did trolls ever make you hesitant about being outspoken?

FR: I don’t think it ever made me hesitant about being outspoken, but I definitely think that when I was first starting out, it hurt me a lot more than it does now. Now I have a better understanding of what to expect — but I also have a better understanding of where it comes from. I think the type of people who use the internet to say nasty things about strangers — it’s because they’re not happy in their offline lives. And understanding that now makes it a lot easier for me to deal with — because it’s really a reflection of them, not of me. But when I was first starting out, it was really hard.

FR: I think in many ways, what’s really great is being able to collaborate with lots of different people, and I’m excited about that. I still realize I have a lot to learn. I love the digital space, but I’m excited about doing something new. So I’m open to working with people who are gonna help me make the best content possible.

HG: Do you have any advice for young women who are trying to build a creative career on their own, as you have?

HG: Other than this history-making pilot, of course, what are some future projects you are looking forward to?

FR: I’ve got a book this year which I’m really excited about! I just closed that. It’s a lot this year, but I’m really excited. I think I’m in a great place in my career and I have a lot that I want to say. The more places and ways I can dive into it, the better.