This week, Forever 21 responded to public outcry over a men’s T-shirt reading “Don’t Say Maybe If You Want To Say No,” which some people found suggestive of sexual assault. Writer Hannah Smothers at Cosmopolitan called the slogan “incredibly rapey” and “basically a punchline for sexual assault,” while Cameron Wolf at Racked wrote, “The T-shirt’s slogan is highly suggestive of rape and it’s shocking that it was ever even suggested, let alone produced and made for sale.” 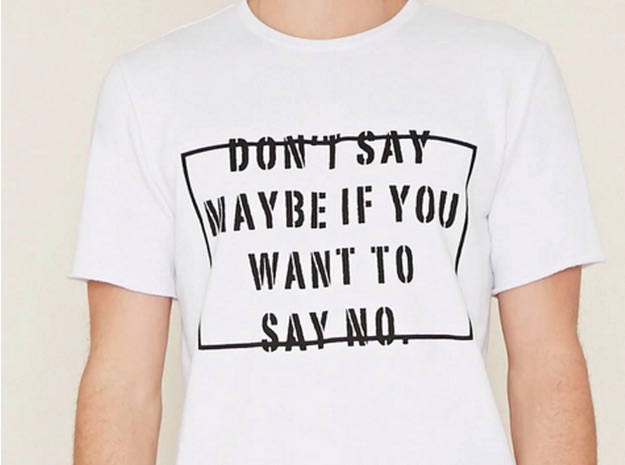 It is worth noting the quote “Don’t say maybe if you want to say no” has been attributed to The Alchemist author Paulo Coelho, who tweeted the saying in July 2013:

Nevertheless, in a statement issued to HelloGiggles today, Forever 21 apologized for the uproar:

To be clear, offending customers is not a problem exclusive to Forever 21: Target got bopped this holiday season for a sweater reading “OCD Obsessive Christmas Disorder,” which was seen as mocking mental illness, and earlier this year H&M fielded criticism that one of their winter scarves looked too much like a Jewish prayer shawl. Given the outcry, customers may be scratching their heads at how a t-shirt is produced and sold in the first place. HelloGiggles spoke with several designers who work in the retail industry to learn how potentially offensive products  end up in stores. Do people throughout the design process not speak up about questionable items? Are some retailers not aware of controversial issues in the first place? Or is there some other reason entirely?

Claire** is a graphic designer whose work has been sold in Forever 21 and Target. In a phone interview with HelloGiggles, she said she suspected the slogan “Don’t Say Maybe If You Want To Say No” was meant in reference to, or at least inspired by, the Justin Bieber song, “What Do You Mean?” where he sings “What do you mean / when you nod your head yes / but you want to say no.” Guessing that the brand’s designers are “very young,” Claire said, “I guarantee you they were probably thinking more along the lines of Justin Bieber than anything else.”

“Whether the shirt in question was a Justin Bieber reference or not, there are a few ways that stores like Forever 21 come up their product’s designs. Leigh**, a designer who currently works for a women’s apparel retailer that is in direct competition with Forever 21, told HelloGiggles in a phone interview that buyers purchase products directly off a vendor to sell under its brand (sometimes with licensing agreements, such as with Disney or Playboy) or purchase ideas from designers like her that the company then executes themselves. In both cases, designs have to be approved by the merchandising team within a company before being sold.

However, the approval processes are different from items that are sold in-store versus online — namely, that the process is stricter for IRL stores. At her current company, Leigh explained, before products are bought to be sold in the shops, they go through “2 to 3 rounds of everyone’s eyes on it” with “everyone across the company that’s in the merchandising role” signing off on approvals. Shipping units out to stores nationwide can be expensive— for some big-box retailers, stores can number in the hundreds —  so companies are less willing to take a risk on a product that might be a dud. The approval process is much looser when buying products to sale online, Leigh continued, explaining that only one or two people need to give a thumbs-up. “It’s a lot easier for [offensive items] to slip through the cracks because one or two people, if they don’t get it” the product nevertheless gets sold online immediately, she said.

So how might Forever 21’s “Don’t Say Maybe If You Want To Say No” t-shirt have gotten approved for sale both in stores and online? (The item appears to no longer be available on Forever21.com.)  Retail is all about the bottom line, so if one product is a success, a company will try to duplicate it. This particular shirt might have been given the green light by Forever 21, Claire suggested, because other men’s t-shirts with slogans sold well. “You have to come up with stuff so quickly and they need so many graphics on the floor at this time and [something similar] did well, so they need another one kind of just like it,” she explained.

“I’m just guessing, but that [in-house graphic designer] probably did about 15 graphics that day, put them up on a wall, and then there’s a design director [who’s] just like ‘no, yes, no, yes,’” Claire said. Due to the “volume and the quick turnaround” of fast fashion retailers, she continued, it’s possible it never even occurred to anyone that the slogan had a negative connotation. Added Leigh, “[The people doing the approvals] don’t really have time to digest what it means or what it is saying.”

The quick turnaround isn’t just for approving designs — production  is also lightning fast. “They don’t call it ‘fast fashion’ for nothing,” Claire said, guessing the time it takes for a design to make it onto the sales floor is anywhere from one to three weeks. “[Forever 21] probably have the blank white tees, and they’re just printing them there, in L.A.”

That being said, Leigh does not excuse Forever 21 for offending customers because, she said, it alone is responsible for what it sells. “It’s really important that buyers are culturally relevant and are sensitive to what’s going on, [that] they have their finger on the pulse of what’s going on,” she told HelloGiggles. “To not understand right away that this is offensive, to not get that, even if you have 10 seconds to look at it, that’s a miss.” Fast fashion retailers especially need to be in touch with the cultural mores of their customers, Leigh continued, or else brands are “going to have misses like this all the time.”

Claire seemed unsurprised that Forever 21’s team may not have picked up on the t-shirt’s reference to sexual assault. “No one [at Forever 21] would look at that and go, ‘Oh! Rape culture!’” she said. In fact, Claire remembered a past incident when a similar situation was averted. “Last year, I was working for some people and Forever 21 wanted to do a ‘Blurred Lines’ sort of spoof, a play on that song,” she recalled. (“Blurred Lines” by Robin Thicke has been criticized for lyrics like “You know you want it” because some people think the song encourages sexual assault.)  “And it was like, “No, it’s not a good idea.”

Leigh also recalled a time when, working for a former employer that marketed towards young women, she was successful in blocking an item from being sold online. She remembered a product where “the verbiage [words on the item] was a little bit sexual” in a way that she deemed inappropriate for the audience. While “it wasn’t offensive… it could be taken in a sexual way,” she explained. Leigh called attention to the issue and with the support of her manager, “we decided to pull it before we even put it on the site because that’s not our brand.”

That particular experience may not be so common, though. Leigh said retailers would rather take a risk and wait for customers to complain rather than stop it from being sold in the first place — likely because they can still make money from it that way. “I feel like in general, retailers are more, like, ‘We already bought the product. If somebody says something, let’s take it down,’” she said.

That’s exactly what has happened with the “Don’t Say Maybe If You Want To Say No” shirt which, Forever 21’s statement noted, was available both in stores and online. So, what happens to all those t-shirts now? “Those shirts probably get pulled off and shipped to some other country,” Claire surmised.

** Names have been changed.