Five questions we still have for “Bambi”

Bambi is that one Disney movie that we all start crying about as soon as someone mentions it because of that one scene that, like Lord Voldemort, shall go unnamed (for now). As far as I know, it’s really not known for much else – which is a shame, since it’s such a classic.

For starters, the lesson behind the story is big: There are certain things in life that are out of our control – including really bad ones – but as long as we focus on friends and inner strength, we’ll be OK. The backdrops of this film are also stunning, especially for the time. When I watch Bambi, I almost feel like I’m in the forest with the characters. And every time I’m in a huge open space, like The Meadow (shudder), I automatically feel so much more vulnerable. That’s some powerful storytelling and animation if it can give you the opposite of claustrophobia.

But this column wouldn’t be itself if I didn’t call out some of the shenanigans behind this movie, so without further ado, here are five questions we still have for Bambi.

What’s the Great Prince doing that’s so much more important than the birth of his son?

The first time we meet Bambi’s dad, The Great Prince of the Forest, isn’t at his birth. No, no. It’s not until 30 minutes into the movie – and all he does is walk past the other deer slowly and haughtily, stopping only for a moment to stare at his son before Bambi’s mom is like, “Yeah, that’s the Great Prince, he’s really respected because he’s super buff and whatnot.” 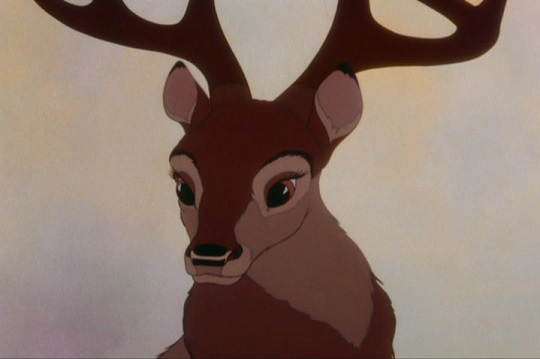 That’s obviously a paraphrase, but seriously, what exactly does he do? If he’s walking that slowly everywhere, he sure as hell doesn’t have time to keep an eye on all the animals of the forest. Does he have minions to help him out? Does he have a lot of wives/kids? Does he just sit around and get fed grapes by a young coed doe, taking one slow walk break a day?

WHY DID BAMBI’S MOM HAVE TO DIE!?

I mean, we might as well just get this out of the way. This was harsh times for kids watching Disney movies. Sure, the no-parents thing persisted throughout the years, but at least once the Disney Renaissance rolled around, one or both out-of-the-picture parents died before the events of the movie. Bambi? Nah. We get the full experience, meaning a lot of 1940s parents were probably cursing Disney when their kids wouldn’t leave their beds at night.

Oh but wait, the Great Prince is there to actually help this time! But womp, it’s only to tell Bambi his mom can’t be there anymore in the least soothing way possible. Great job, man.

Sure, it’s understood that he helped raise Bambi from this point, but maybe if he’d been there in the first place, MRS. GREAT PRINCE OF THE FOREST WOULD STILL BE ALIVE. #RoyaltyGuilt

What was Flower’s actual name?

OK so Flower is the most adorable skunk I know of (sorry, Pepé Le Pew). He’s also the sweetest and friendliest, evidenced by the fact that when we first meet him, a just-learning-to-talk Bambi calls him “Flower.” And instead of being like, “Nah, man, I’m Mr. Skunk,” he just rolls with it.

But what is his real name? Is it something related to his species/personality, like Thumper? Or just a normal name like Bambi or Faline? Or something really arrogant like Bambi’s dad – Great Prince of the Skunk Section of the Forest, maybe? If he legally changed his name to Flower, though, I wouldn’t be mad. He is pretty, and the scent-related irony is not lost on me.

Why didn’t Faline have a bigger role?

When we first meet Faline, she is running circles around Bambi, trying to get him to come out of his shell. She isn’t afraid to tease him a little, and obviously has a fun and rambunctious personality that, in my opinion, deserves a healthy amount of screen time.

Instead, poor Faline is just there to fawn (see what I did there?) over Bambi and become his wife at the end of the movie after he battles another buck for her, because of course.

Disney sort of made up for this 50 years later with The Lion King by making Nala a pretty big badass in her own right, but Faline’s fate still stings a little – especially since Bambi apparently learned from his dad that it’s OK not to be present at the birth of your children.

What is Thumper’s relationship with his nephew Roger like?

I recently read that in Disney canon, Thumper is Roger Rabbit’s uncle. I have no idea how I didn’t catch that before – maybe because I haven’t seen Who Framed Roger Rabbit? in about 20 years, even though I own the DVD. But apparently Thumper makes a brief appearance somewhere in the final scene, and Roger says he’s his uncle at some point in the movie. Oh and that Thumper has to take medication for his prostate, which is more than we needed to know.

I’d watch a Thumper/Roger Rabbit spinoff movie in a heartbeat, honestly. An animated film about an uncle and his nephew getting into hijinks while the uncle constantly has to fumble with the morals his mother guilted him with, I mean instilled in him, as a child? Perhaps with a hilarious slapstick scene at the prostate doctor’s office? Comedy gold.