Supreme Court Justice Ruth Bader Ginsburg is a hero. She’s responsible for some of the most important feminist opinions and dissents of our time, fighting to end sex- and gender-based discrimination in many fields, and a guiding inspiration to many. (Just ask anyone with a tattoo of the justice on their bod.) In 2018, we were blessed with the RBG documentary, which introduced us all to Ginsburg’s “dissent collars” and diva-licious workout routine. And now, we’re getting On the Basis of Sex, a biopic about the rise of the icon we know and love today.

At the helm of the film is Felicity Jones, the English actress beloved for her portrayal of Jane Hawking in The Theory of Everything and her work as college student Anna in 2011’s Like Crazy. The versatile actress brings us a new side of Ginsburg in On the Basis, illuminating the early years of her courtship and marriage to her darling late husband, Marty Ginsburg, and taking us through her law school years up to her first major court case.

HelloGiggles chatted with Jones in Los Angeles recently about what it took to bring this icon to life. Read on to find out the significance of RBG’s favorite brooch and how Jones first learned about the American lawyer.

HelloGiggles: Did you work at all with Ruth Bader Ginsburg on this role?

Felicity Jones: I met her when I’d been prepping for a good few months, and then we went to Washington to go and spend some time with her. Ruth had been involved in the script from very early on—she’d seen many, many drafts. Actually to the point where she was like, ‘I don’t need to see another draft!’ Daniel [Stiepleman] started writing it in 2011, 2012, so it’s many, many years before it even reaches the cast. So she’d been giving notes along the way, and she’s overseen everything. She’s overseen the casting, she was very much involved. So I knew that we had her blessing, it was more just wanting to get to know her out of curiosity.

I felt enormously privileged to be playing such a beloved figure, and I’m a huge fan of hers, so it was really fascinating playing someone who you deeply, deeply admire. But it was very much about building up a friendship and a trust, and that’s ultimately you looking at nonverbal cues, that sort of thing. How the person behaves. Obviously you can do so much by reading about them, but there’s nothing compared to meeting them.

HG: Were there any especially memorable moments that you shared with her?

FJ: It was being in her apartment, just the two of us. We had coffee together. Also when we first met Justice Ginsburg, we walked into her office and we were all very nervous, and she couldn’t take her eyes off Armie Hammer, so that was a really beautiful moment. I could see just how much affection her and Marty had for each other, channeled through Armie. So it was all these little moments. And then being in her apartment, her proudly showing me her desk in her room, which is about half a meter from her bed, and just seeing the way she organizes her desk. That tells me so much about who this person is. The tidiness, the efficiency, the focus, the love of the law, the care with which she goes about navigating it. 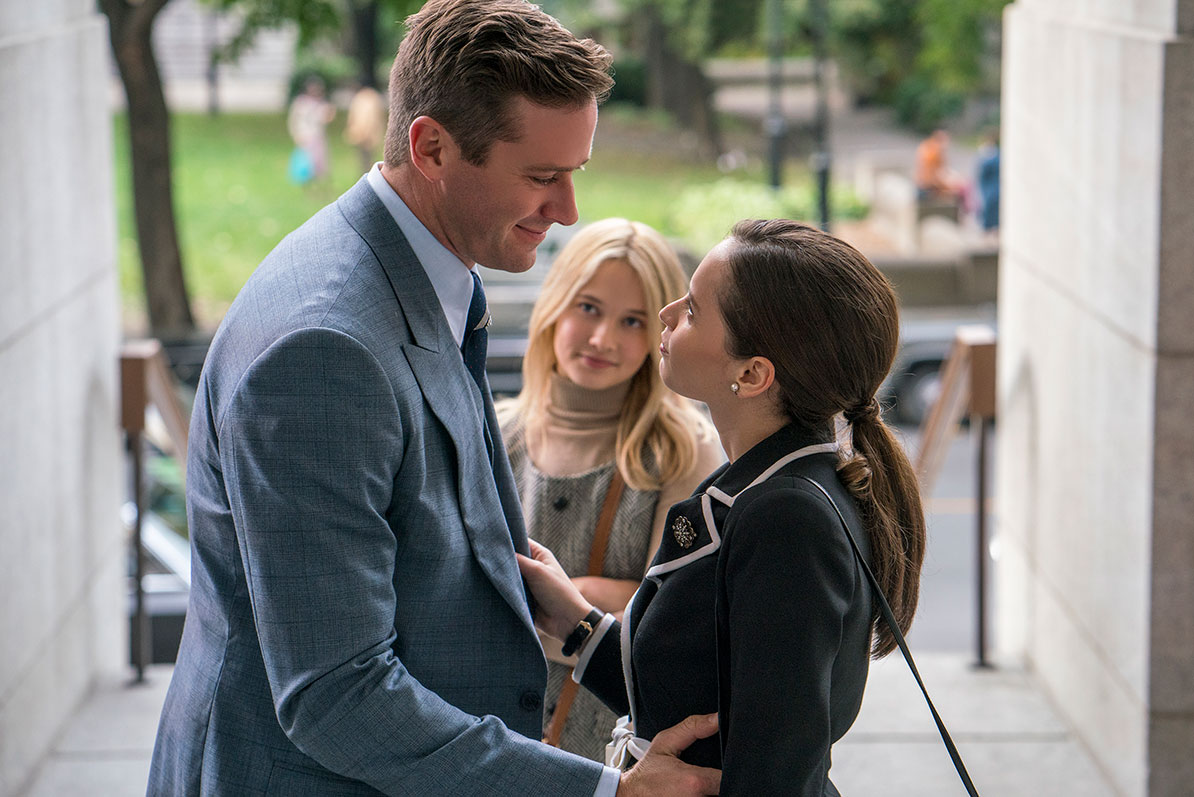 HG: That sounds very moving. I hope you don’t mind me asking this next question, but I’m Canadian, and before I moved to the U.S. I wasn’t very familiar with Ruth Bader Ginsburg. I’d love to know what your relationship to her was like, and what your knowledge of her was, before you started working on this film.

FJ: My mother had been listening to a radio program about her in England, so we’d talked about her a good year before I got the script. She’d said, ‘I’ve just heard about this extraordinary woman who’s a lawyer in the U.S.’ So when I read the script I had an idea of who she was, but it wasn’t until I read it that I knew all the depth and the details, and the sheer amount of struggle and determination that it took to get to her position. And just how much integrity she’s had all the way along, through every situation.

I think that’s why we all have such respect for her and why she’s held in such high esteem, because it’s not about money, it’s not about fame, she’s not a politician. She’s someone who has fought for her beliefs and done it with such integrity, and there’s not many people who we can really look up to.

There’s [also] a wonderful book that’s all about extraordinary women, it’s called Good Night Stories for Rebel Girls, and I’m obsessed with it—both versions of the book, even though I think it’s meant for children. But this is for everyone—this is for men and women! And obviously there’s a piece about [RBG], so I’d also remembered reading about her in that book.

HG: Is there anything you were surprised to learn about her while you were preparing for this role?

FJ: I think it was her incredible ability with writing, and how she was actually, from a very young age—she was about 12 years old—she was writing for the school newspaper. She was very advanced for her age, and knew the power of words. Even in those early pieces of writing, you can see the power that she has, and the force of her integrity comes through even then. Being quite shy myself, I’ve learned so much from her—seeing someone who’s also quite reserved, how she has such power when she believes in what she’s saying. So when she’s written something down, she’s got all the confidence in the world because she has the power of the truth.

HG: Speaking of that, when we see her in public she seems very reserved; she’s powerful, but she seems to be an introvert. Watching the film, I was really struck by your portrayal of her at home, in those intimate spaces we don’t see as the public. How did you bring that to life, especially those emotional scenes and even love scenes with Armie?

FJ: You don’t want to do an imitation [as an actor], you don’t want to do a Madame Tussauds wax work. Our job is very much to find the humanity and find the edges and find the idiosyncrasies. And with Ruth Bader Ginsburg, obviously we all know her when she’s so much older—from about 1993 she’s been really in the public eye. But she was a very private person before that. So that was part of my research—imagining what this person was like when they were younger, and using incredible archive footage of Marty and Ruth on their honeymoon, and then listening to recordings of her in court from that time. That was an incredible resource, and I learned so much about her from understanding her voice and her accent and her way of speaking at that time. My agenda was just to be really true to what I listened to and what I watched, and build a sense of what it takes to become an icon.

HG: I recently watched the RBG doc, and in it we learn about her different collars—the one she wears when she dissents, and all the meanings behind the others. Was there anything symbolic or significant about anything you wore in the film?

FJ: Oh, yeah. I wore a brooch, which was a replica of the one that Ruth wears, which was from her mother—it was her mother’s brooch. That was really important.

I think also navigating her style over the years, because she had such a strong sense of style from a very early point—she knew exactly what she liked. Once she gets into the ’70s you see her hair go back; her love of scrunchies comes in the ’80s, of scarves. That’s also why she’s such an icon—she’s a fashion icon. She’s someone who knows who she is and has consistently expressed that all the way through.

HG: I’m guessing Ruth and her family have seen the film?

HG: And what has their response been?

FJ: Well,Ruth has been telling her friends to go and see the film, so I think we’ve got a fan there. They’ve all been so involved in it, especially with Daniel, Ruth’s nephew, writing the screenplay. But what’s going to be lovely is all celebrating together in Washington [after a screening]. They are a remarkable family.

On the Basis of Sex is in theaters nationwide January 11th.