On December 16th, one of our favorite stars was on the The Graham Norton Show. Felicity Jones is pretty freaked out about fan tattoos, she revealed, reported Entertainment Weekly. And we so get her reasons.

Of course, currently, Jones is in Rogue One: A Star Wars Story, which also came out on December 16th.

In it, Jones plays Jyn Erso, a criminal, and the Rebel Alliance sees this character trait as a benefit to them — she can help them get info on the Empire’s new weapons system, according to CinemaBlend. We. Are. So. Intrigued.

“Jyn Erso is not a woman who cowers in fear,” said StarWars.com. “She doesn’t let the darkness win. Instead, she leads the fight for hope and light.” And, tbh, we can all use more hope and light these days, yes?

We have no doubt that Jyn will be our new Star Wars heroine. And with new heroes and heroines, the fans come out. And if we’re talking Star Wars, they come out in ~ginormous~ masses.

On his BBC show, Norton brought up how “nerd fans” sometimes get “nerd tattoos,” which prompted the fan tattoo discussion. Jones said she came across a male who had the character of Jyn tattooed onto his calf. Then Norton shows a still photo of a man’s calf with Jyn on it. 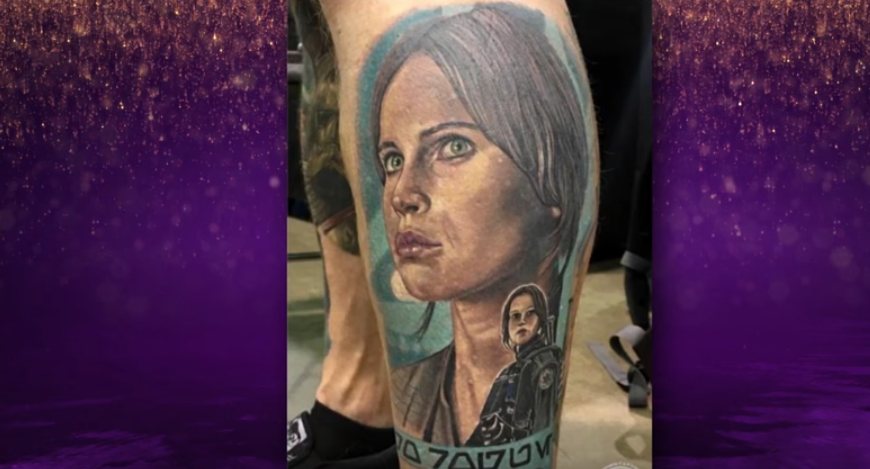 “Oh my goodness, Jones says, shocked. “Yeah, I’m just worried about what happens when the hair grows back.

Everybody laughs. But who knows? Maybe the man will keep his legs, or at least that one, shaved? Or maybe some of the hair would blend into Jyn’s hair on the tattoo?!

To get the full humor of the discussion, you really have to watch the clip from The Graham Norton Show with Jones.

See?! And we agree with Norton — the tattoo looks ah-mazing. Meanwhile, brb while we go line up to see Jones in Rogue One: A Star Wars Story.