Even pros aren’t immune to anxiety. Here’s how three experts cope with stress. 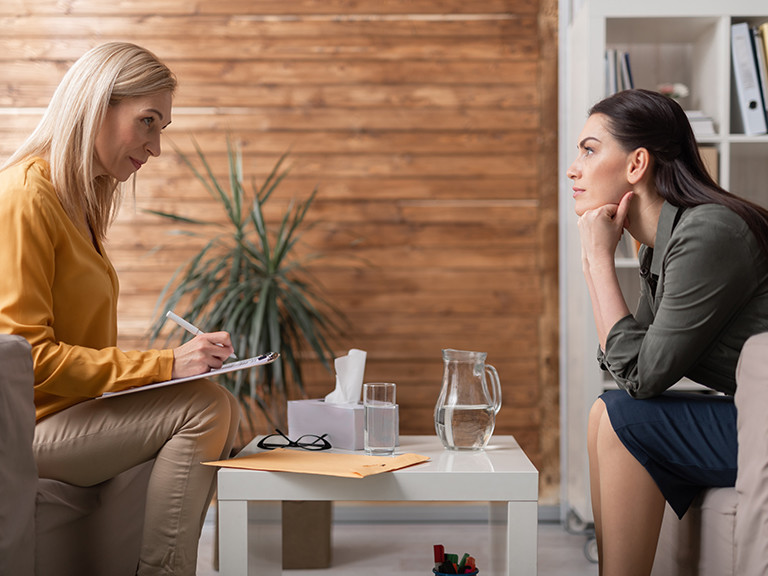 Ever wonder how therapists deal with anxiety? Below, three mental-health professionals give a peek behind the curtain. Consider this your free consultation.

Get to the Bottom of What’s Bothering You

The first thing licensed marriage and family therapist Johanna Austin-Azadi does when she notices a spike in stress is take a moment to figure out if what she’s feeling is, in fact, stress. “As a society we tend to go into a default [of] ‘I’m so stressed!’” she says. “So the first thing I say is, ‘I’m feeling stressed, [but] is it really stress? Or do I need to attend to a part of my tank that is low?’”

The tank she’s referring to is essentially your energy reserve, and to keep it full you need enough sleep, healthy foods, water, exercise, and joy. “When our tank is low, we’re irritable, we’re impatient, we’re coping in the moment, and everything is perceived as more impactful than it necessarily may be,” Austin-Azadi explains.

If her tank is full and she’s still feeling stressed, then it’s time to go deeper. “I look at stress as a symptom,” Austin-Azadi says. For example, you might find yourself feeling stressed because of what’s going on at work. If that’s the case, ask yourself whether you have the support you need there or whether you even like your job. From there, “go underneath what is presenting as stress,” she says.

In the event of a stress flare-up, Lisa Bahar, a licensed marriage and family therapist, similarly turns her attention inward: “I first have to be able to notice that I have a vulnerability,” she says. Then she takes a step back. “I have to stop and freeze.” Bahar will go for a walk or listen to music. “Then I can return to the situation and proceed with balance: What is it that I need to do in order to be effective in this situation versus reactive? Because anxiety is fear,” Bahar says. “I’m anticipating something that may or may not actually be true. So my head is going into overdrive to figure out a situation that I’m feeling out of control of.”

Control What You Can

As psychologist Chloe Carmichael, Ph.D., points out, anxiety isn’t always bad. If you identify the concern that’s causing it (let’s say you’re worried about money), you can use the resulting adrenaline to tackle the problem (by say, creating a budget). “The idea is to find the right thing to point your energy toward,” she says.

To convert anxious energy into proactive energy, she offers clients a tool she calls the Zone of Control (she uses it herself, too): “You think about the topic that’s making you anxious, and you divide it up into two categories: areas that you can work to control and how you can control them; and then all the things that you cannot control,” Carmichael explains. For example, if you’re gunning for a promotion, you can control your work output; you can’t control the fact that there’s someone on staff with seniority over you.

“By labeling and sorting out those factors, it helps stop you from pursuing dead ends,” Carmichael says. “That way, when the non-control factors pop into your mind, instead of just telling yourself not to think about them (which is like telling yourself not to think about pink elephants) you have something pre-cut to pivot to.” In doing so, you won’t waste your time spiraling over something you can’t change.

Another way to regain a sense of control is to talk through your anxiety with friends, family, or a professional. “The brain will go on repeat [when we’re anxious] because it’s trying to organize and it’s trying to remember,” Austin-Azadi says. “So if we take [our thoughts] out of our brain with verbal processing, it externalizes that spinning feeling.”

Set Aside Time for Yourself

Bahar normally reserves Sundays for unplugging and relaxing, but there was a period of time last year where she had to change up her schedule while she took on caretaking duties for a family member. “I started to do errands on Sundays, which completely threw me off my balance,” she says. “So I reclaimed my Sundays and scheduled the errands for another day.” And the impact has been significant. “I’m much more productive, I’m clearer, I’m less fatigued,” she says. “I have to protect Sundays.”

Austin-Azadi makes a similar point about establishing boundaries. “If I have a relationship that’s stressing me out, I look at the root of the relationship and then I reassess the boundaries.” For example, if she notices that a person consistently takes up a lot of her time, and that makes her feel behind for the rest of the day, then she makes an effort to change the relationship. She’ll tell herself: “Unless I have a full tank and all my things are done, I’m not going to interface with this particular person. It’s not in judgment, but if I don’t have my own equilibrium, I can’t serve other people.”

“I notice I sometimes hold my breath [when I’m anxious],” Bahar says. She recommends learning some breathing exercises, such as five breaths in, seven breaths out. “Start practicing that daily,” she says. “You don’t have to be anxious to start practicing it. Just make it part of you.” Another breathing technique to try is inhaling through the nose and exhaling through the mouth for twice as long, Austin-Azadi suggests.

The key is to think beyond the obvious (“I’m grateful to be alive”), Austin-Azadi says, recommending instead what she calls “micro-gratitudes.” For example: “I’m grateful that I have new tires on my car, because it’s raining out and I feel safer.” Or, “I’m grateful that right when I thought I couldn’t take another minute, time opened in my schedule.”

“When we train the brain to search for gratitude, the way we look at the world changes,” she says. “Our whole lens becomes more optimistic, and our wiring shifts out of the old, [anxiety-inducing] stories we repeat and moves into a new sense of wonderment.”