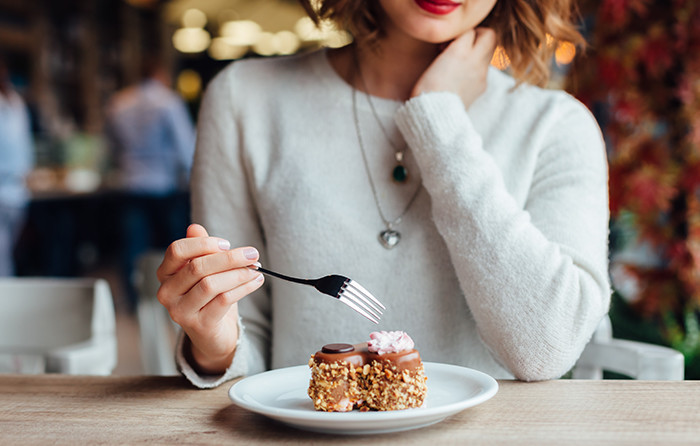 Next time you’re picking out what to eat, consider choosing your dessert first — and indulge in one of the more decadent options available while you’re at it. According to a new study, doing so can lead to overall healthier food choices.

The research, published in the Journal of Experimental Psychology: Applied, looked at the order in which people selected food — both in a cafeteria and online setting — to determine how the order in which food is presented to a consumer might impact their decision-making. In part one of the experiment, 134 cafeteria patrons were given four setups over four days: healthy dessert (assorted fruit) first; indulgent dessert (lemon cheesecake) first; healthy dessert last; and indulgent dessert last. The main dish options and side dish options included a “lighter” choice (grilled chicken fajitas, 247 calories; small green salad, 60 calories) and a “heavier” choice (fried fish with tartar sauce, 530 calories; French fries, 265 calories).

“Essentially what we were trying to see was whether just by making changes in the order in which food was presented in a sequence, we could get consumers to choose healthier options and have fewer calories,” says study co-author David Flores, PhD.

“We built on previous research that has hinted at this possibility that when you select something that is considered indulgent, then it sort of triggers a sense of guilt,” Flores explains. “And that’s why consumers in subsequent choices tend to limit themselves, because they think, I ate the chocolate cake, I went overboard with that, so I’m going to try to limit myself in the next decision by choosing lower-calorie foods.”

In fact, the study found that diners who picked a decadent dessert first ate 30 percent fewer calories overall than diners who chose a healthier dessert first, and they were twice as likely to order the lighter main dish.

On the flip side, consumers who initially opted for the fruit salad might have felt like they had license to order with abandon thereafter. “We found that those consumers thought, I’m being very good…now I can indulge,” Flores explains. “They ended up eating more calories overall.”

What’s interesting is that the same thing happens even when you’re not physically in front of the food. The second part of the study replicated the first, only in the context of a mock online food ordering service, and showed similar results. “A lot of food ordering services present their choices of food sequentially, meaning consumers have to make their decisions step-by-step,” Flores says. “This is another environment in which the results of this research could be applied and have a significant impact on consumers’ health.”

So whether you’re picking up lunch at your office cafeteria, looking at a menu at a restaurant, or hangrily ordering in dinner from an app on your phone, try selecting your dessert first if you were planning to order one — and go with the chocolate mousse if you so desire. It might end up being part of the healthiest overall meal, and you can quite literally have your cake and eat it too.