Ellen DeGeneres revealed her favorite fashion moment of all time

While she might not be the first name you think of when you’re thinking “fashion icon,” Ellen DeGeneres definitely has a favorite fashion moment from her past. And trust us, it’s an incredible one.

The host and comedian always looks fantastic, but it was one particular dress that stands out for her. It all took place back in 2001. Back then, DeGeneres was hosting the Emmy’s, and one of her costumes for the show was something she’s still insanely proud of.

"Wearing the Björk swan dress when I was hosting the Emmys in 2001," DeGeneres said in an interview with Footwear News. 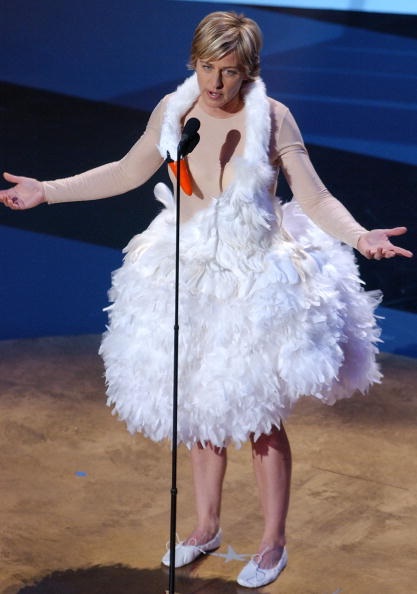 Ellen’s hosting gig happened two months after the 9/11 attacks. The show was actually rescheduled due to the tragedy. While we were all slowly rebuilding and recovering, we really needed laughter — and the style of comedy that DeGeneres flawlessly brought time and time again — to help us through.

That’s probably one of the many reasons as to why it was so memorable.

For those unaware, the dress mimicked the headline-making swan dress that singer Björk wore to the 2001 Academy Awards just months earlier. And yes, at the time, it was so outlandish that people couldn’t stop talking about it. (For the record, we’ve always thought it was pretty fantastic.)

When DeGeneres debuted the dress at the awards, she was met with nothing but laughter and applause.

"I guess this is business casual," DeGeneres joked. "I don't know if it's appropriate, but I planned on wearing it when we were going to do the original Emmys in September. And everyone knows that it's fine to wear swan in September, but...but is it okay to wear it after September? I know it's duck after October and goose before November."

No matter what, the funny dress required a lot of confidence. And that’s something that DeGeneres definitely credits to her style today. In her words, she believes that fashion “should be your own unique, individual expression,” and we definitely agree. Even if that expression includes feathers.