Did Facebook warn you that a friend used the “This Is Your Digital Life” app? Here’s what that means

This past week, Facebook CEO Mark Zuckerberg apologized in front of Congress for the Cambridge Analytica data breach that affected an estimated 87 million Facebook users. Cambridge Analytica, a London-based data-mining company, reportedly used Facebook users’ information to create targeted ads in support of the Trump campaign, potentially influencing the 2016 presidential election. The company obtained said user data through an app called “This Is Your Digital Life.”

On Monday, April 9th, Facebook began the process of alerting its 2.2 billion users about whether their data had or had not been collected by Cambridge Analytica. A “see how you’re affected” feature has been added to users’ News Feeds, and the site is now sending out notifications telling users if they or a friend used the “This Is Your Digital Life” app.

"We have banned the app 'This Is Your Digital Life,' which one of your friends used Facebook to log into," the notification reads. "We did this because the app may have misused some of your Facebook information by sharing it with a company called Cambridge Analytica. In most cases, the information was limited to public profiles, Page likes, birthday, and current city."

“This Is Your Digital Life” is just one of the various personality quizzes available on Facebook. According to New York’s PIX11, the app was created in 2014 by academic researcher named Aleksander Kogan, who paid about 270,000 people to take it. 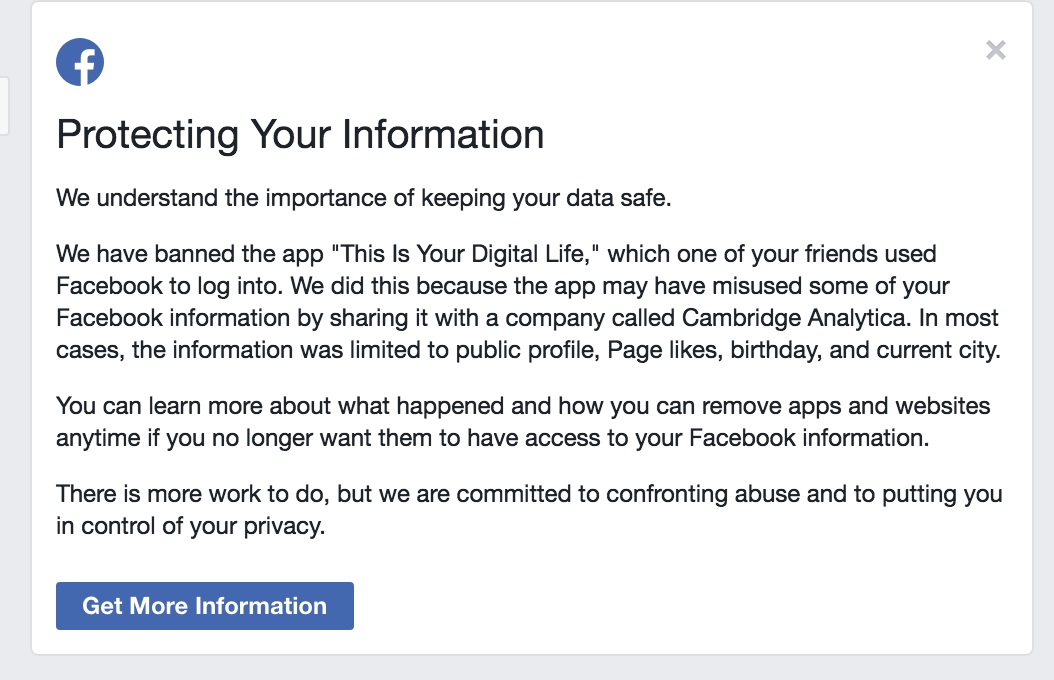 "Based on our investigation," another notification reads, "you don't appear to have logged into 'This Is Your Digital Life' with Facebook before we removed it from our platform in 2015. However, a friend of yours did log in."

The notification then tells users what information of theirs was most likely compromised.

While the app was up and running between 2014 and 2015, this kind of data collection technically was allowed under Facebook’s terms of service. However, Kogan was banned from Facebook in March after the company learned he had sold the information he amassed to Cambridge Analytica, which is in violation of the platform’s policy.

If you’re a Facebook user, you should be getting a notification pertaining to your data within the next few days, if you haven’t already.