Evan Peters shared a behind-the-scenes pic from last night’s “AHS” episode, we have some feelings

This season of American Horror Story has been pretty divisive, to say the least. Some people loved the odd new docu-series format, while others absolutely hated it – and the latter group is probably in luck, given the very mysterious promo we got for next week’s episode “Chapter 6.” Some have thought that the Pig Man, little ghost girl, and The Ring-like crab-walking ghost chick are the most horrifying things they’ve ever seen on AHS – others have been bored stiff by this season’s “scares.”

But whether you’ve loved or hated the season so far, it’s safe to say that virtually all viewers shared one basic question: “Where in the everloving heck is Evan Peters?”

Peters has been a staple of the cast since the very first season and is a huge fan-favorite AHS actor. So, understandably, everyone watching was a bit alarmed when he didn’t show up AT ALL for four entire episodes. (It was tough, not gonna lie.)

We finally met Evan Peters’ character in last night’s episode – just in time for that section of the story to apparently wrap up, leaving no reason for Peters’ gay, British, aristocratic, slightly loony Edward Philippe Mott to appear again. 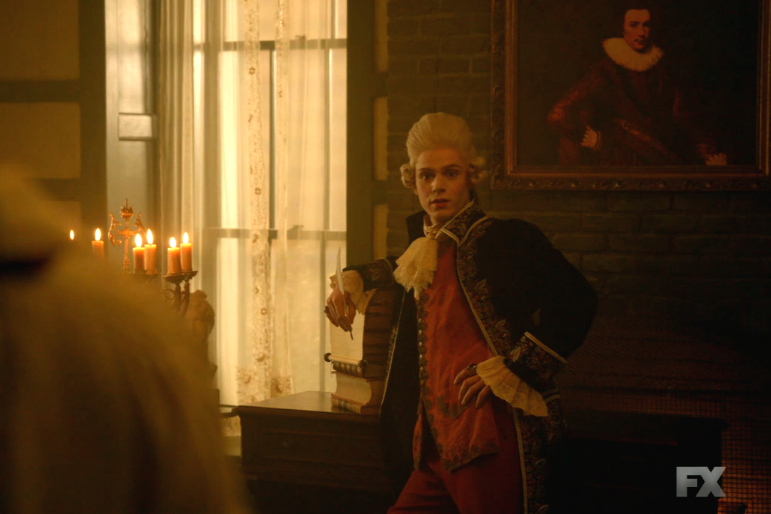 “Paint me like one of your French boys, Guinness” – inner monologue of Edward Mott here, probably.

Insert sad face, because I was truly looking forward to more of Edward. Fans (including yours truly) will probably be slightly miffed if that 15 minutes of screen time was all we’ll see of the actor this season.

“Thanks to Murphy, Falchuk, and all 2.1 milli of you who made it possible for me to wear a powdered wig. Love you guys,” Peters captioned the photo of himself in Edward Mott’s powdered wig and 1790s-chic fashion, cradling a prop bust in one hand and holding a cane in the other.

He’s kind of rocking the look, isn’t he? Not everybody could pull that off.

Evan’s photo was taken by AHS writer John J. Gray, who also shared another photo from that same BTS mini photo-shoot on his own Insta account:

If the show leaves behind the docu-series format and moves into “real life” (as we’re expecting), it’s still possible that we’ll see Evan Peters again – perhaps this time as the actor who “played” Edward Mott in the dramatic re-enactment for “My Roanoke Nightmare.”

For now, I’ll just be sitting here, remembering this powdered wig and this face, in the torch-lit darkness of the tunnels. 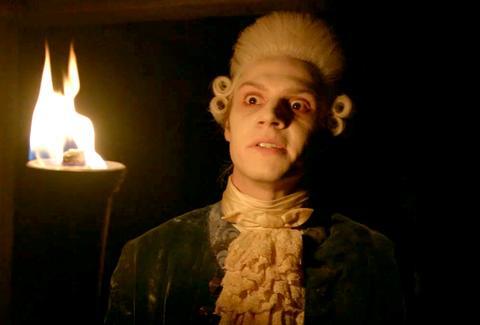 Truly, I don’t know if any role Evan might play later this season could top Edward Mott, but I’ll happily wait and find out.