Too many of us have stories about struggling to access the care we need. Often, health care obstacles are directly tied to medicine’s gender bias, as well as stigmas relating to our race, ethnicity, sexuality, gender identity, age, size, income, and condition. In our series Pain Today, we are highlighting these stories through personal and reported essays, hoping to empower each other to advocate for our health in a way that much of the medical community does not. As March is Endometriosis Awareness Month, one of our contributors discusses her experience with struggling to get an endometriosis and PCOS diagnosis because of her weight.

The first time I saw a doctor for abdominal pain at 15 years old, I was surprised when my physician said my symptoms were likely happening because of my weight. I felt offended, my face burned with shame, and I questioned if I was really fat enough that my size would impact my health so severely. They hadn’t even examined me, so how could they know nothing else was wrong? For years, doctors led me to believe that my weight was the reason I was in pain while several chronic conditions ravaged my body.

I struggled with all the trademark symptoms of endometriosis and polycystic ovarian syndrome (PCOS) for nearly a decade—debilitating cramps, irregular bleeding, painful sex—but it felt like my symptoms were never taken seriously. Over the course of seeing several OB/GYNs and family practitioners, my pain was downplayed and I was told to change my diet and exercise. At first, I wondered if it could possibly be true that all my symptoms were a product of my weight. But, after hearing it over and over, I became exhausted by the unending pain and convinced it must be.

When I was around 12 years old, a doctor completing a routine physical saw stretch marks on my belly and remarked, “Oh, you must’ve been quite fat.” I was stunned silent. I hadn’t lost that much weight at that point—the stretch marks had appeared in the normal course of growing—but I remember my eyes stinging with embarrassment when he commented on my size.

For as long as I can remember, doctors were neglecting my health issues in favor of commenting on my weight.

The feeling of shame stuck with me and at every other doctor’s appointment after that, I waited for my physician to say something about my body. If my chart indicated I’d lost weight at an annual check up, I was congratulated even though my doctors knew I struggled with disordered eating habits. It made me feel like getting thinner was the most important thing for my health, even if that meant not eating enough.

Many people with PCOS gain or struggle to lose weight as a result of the disorder’s hormone disruption. In addition to this telltale sign, I had other classic symptoms like painful, cystic acne and dark body hair—but it was always my weight, not the pain I was experiencing, that was treated as the problem. Doctors and nurses looked at my plus-size body and said outright, “Your symptoms exist because you’re fat.” To these medical professionals, my weight seemed to matter more than the fact that I once bled for 60 days straight.

My pain was being ignored because I was a size 14.

When I was 19 years old, blinding pain in my abdomen had me rushing to the hospital. I doubled over and cried out as emergency room doctors conducted a trans-vaginal and external ultrasound. My mom was with me during the scans, saw my original ultrasound and asked the doctor why my ovaries looked like bowls filled with grapes. Even though they said it was normal, we know now that it definitely wasn’t. Being sent home with no answers was defeating, to say the least. The lack of validation made me start to wonder if the pain was all in my head. Had I somehow been making this up?

The emergency room referred me back to the same OB/GYN I was seeing, who insisted I simply had difficult periods. Over the course of seeing her for more than two years, trying various methods of birth control that frustratingly never eased the pain, she eventually conceded that I could possibly have a mild case of endometriosis.

Ultimately, I underwent a diagnostic surgery, and my doctor told me that everything in my abdomen looked “mostly normal,” confirming that I have a mild case of endometriosis. She assured me that my symptoms would improve when I lost weight or had children, a common myth about the condition. I felt hopeless—leaving her office with tears in my eyes, feeling as though the pain that was disrupting my life wasn’t important enough to find a real solution for. Maybe there wasn’t a solution.

Despite learning I had endometriosis, it took several more agonizing years, more debilitating pain and multiple trips to the emergency room before I had a complete diagnosis.

Around the time I turned 20, about five years after my pain began, I started to do things the doctors’ way. I believed exercise might help my pain, as my physicians kept telling me. The gym became an outlet that started as a healthy habit, but, with my eating disorder history, I quickly became obsessed. I woke up at 5 a.m. to go to the gym every day, planning and prepping my meals so that I could eat fewer than 1,300 calories. I dove headfirst back into my long dormant, unhealthy eating behaviors that I thought I addressed in therapy years before. I lost nearly 70 pounds, but my mental health was suffering. But despite all my efforts, I was still in pain. 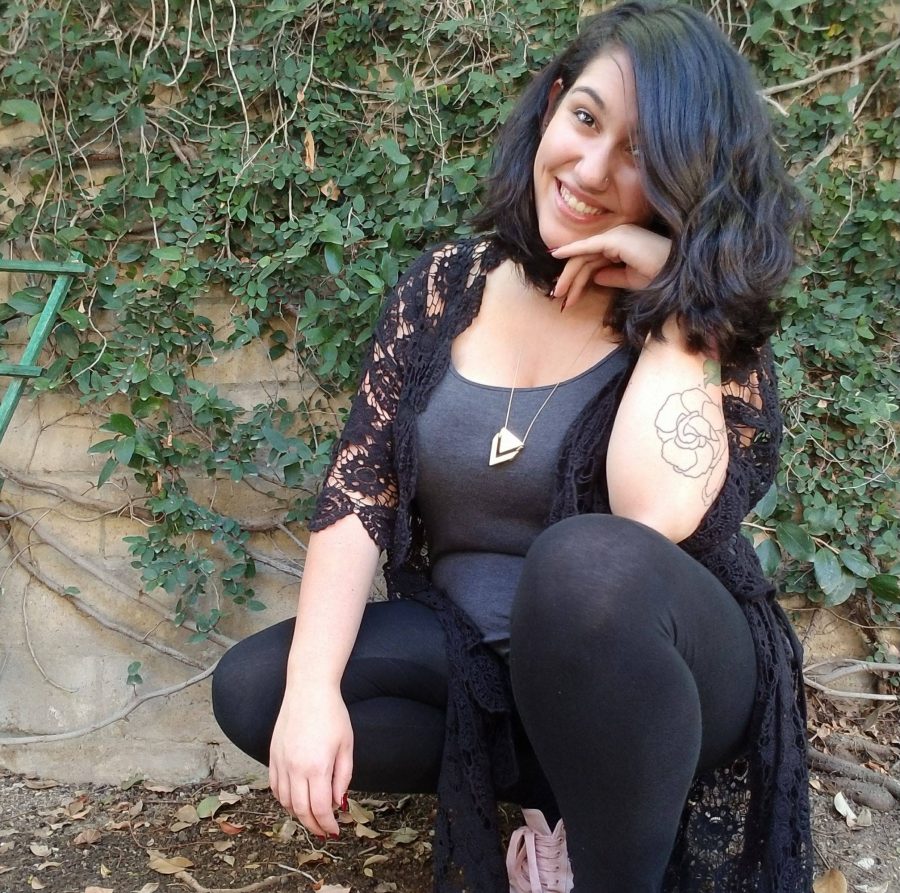 At that point, I felt lost. I was still experiencing extreme breakthrough episodes that left me curled up in a fetal position on the couch. I still needed opiate-based painkillers when I had my period. It was exhausting and debilitating to continue living with the chronic pain and I was running myself ragged trying to be thin enough so it would stop. No matter what I tried, it wasn’t helping, and I eventually ended up in the emergency room again.

During my second trip to the emergency room, it was like a light switched on—doctors finally seemed to take me seriously. When I was 22 years old, near my lowest weight, the same doctors in the emergency room who had given me X-rays and ultrasounds before, looked at scans of my thinner body and saw what had been there all along: ovaries filled with cysts and signs of endometriosis, including small lesions on my uterus from where scar tissue had formed.

I remember the moment the doctor said it:

“How long have you had PCOS?” He asked while conducting a trans-vaginal ultrasound. I looked at what he was seeing on the screen, and I started to cry.

My newest scan didn’t show anything I hadn’t seen in previous tests—I looked at my ovaries, filled with little black circles that I had asked several physicians about, and wondered why nobody had ever diagnosed me before. I was exhausted, angry, confused. I felt like I had been fighting to get my doctors to take me seriously when I described my symptoms and they were finally noticing something that should have been obvious. Why had it taken so long? For years, over the course of so many other tests and scans, the little black circles had been ignored. My pain had been ignored. I felt like I had been ignored. My symptoms had been chalked up to a mild case of endometriosis, despite the evidence that I had also been suffering from PCOS all along.

And I know I’m not alone in this. Women have a hard enough time getting doctors to take us seriously in general, never mind when we have issues with our periods. When women are in pain, studies show they wait longer in emergency rooms and have their pain dismissed more frequently than men. This, combined with the stigma still attached to periods and menstrual pain, leads to longer waits for diagnosis and treatment.

On average, it takes two years to receive a PCOS diagnosis. When you add in additional challenges like racism in the healthcare industry, being discredited because of your age or, in my case, being overweight, getting a gynecological diagnosis can take so much longer.

As a fat person, I find that doctors usually see my body as a problem that needs to be fixed instead of listening to the symptoms that could actually use their help. And while it’s proven that when doctors fat-shame patients, their health suffers, it still happens.

In reality, the discriminatory way doctors look at large bodies can lead to our unnecessary suffering.

I used to try to convince myself it was a coincidence that I received my diagnosis when I was near my lowest weight. I wanted to let my doctors off the hook instead of acknowledging their prejudice against my body. It hurt to believe that, even unintentionally, they might treat me differently because of my size. Thinking about it more, their bias becomes harder to justify because the only thing that changed when I got my diagnosis was how much I weighed.

The hard truth is that I was treated differently by doctors when I was thin. And since I’ve gained back the weight I lost at the time of my diagnosis, I’ve started to feel judgement creep back into my appointments with my general practitioner. But, because of my previous experiences with my OB/GYNs, even a small comment is enough for me to realize it’s time to look for a whole new medical team.

The last 10 years of suffering from these conditions and struggling to get a diagnosis have been expensive, painful, and challenging but, ultimately, transformative. I finally have a diagnosis, I know my symptoms, and I’m learning more about various treatment options for people with PCOS and endometriosis. What I need now is a physician who will listen to me and help to treat my symptoms, no matter what size I am.

If you or someone you know is struggling with an eating disorder, please visit the National Eating Disorder Association (NEDA) for more information and support or text “NEDA” to 741-741.