John Krasinski is a beautiful human being *always*, and we’ve been in love with him ever since we saw him prank Dwight and fall head-over-heels for Pam in The Office. But when he suddenly sprouted (OK, worked really, really hard for) a bazillion muscles for his role in 13 Hours: Secret Soldiers of Benghazi, the Internet pretty much lost its mind. Here’s his new bod, ICYMI: 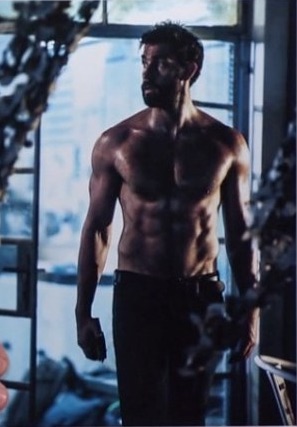 But earlier this week, John said that Emily Blunt was more into his earlier, non-superhero bod than his muscle-y, jacked one. “She would way prefer to have doughy guy back,” John joked to Stephen Colbert on The Late Show.

And there was a collective “awwwww” around the land. After all, John has had to go through actual hell to maintain that figure. “I thought it would be like, ‘Yeah, let’s eat a couple Power Bars and do push-ups,’” he said. “And [my trainer] was like, ‘No. It’s going to be a living hell for six to eight weeks.’” So it’s really nice that Emily would prefer the natural John to “two-a-days, pulling sleds, pushing weights” John.

However, it turns out John was totally kidding about Emily not liking his new bod. “I can’t believe people took that the wrong way. I was totally kidding,” he told NBC. “She is a huge fan of that, but of course, people will write what they want to write. But no, she’s a big fan of it.”

In fact, he’s pretty inspired by another star we all know and love, Chris Pratt. “I remember Chris Pratt, it was really inspiring for him to say, ‘I’m never going back,’” he said. “I went, ‘You know what? I think I’m with you, Chris.’”

Hey, while it’s really important to love yourself exactly how you are, we are all for John’s commitment to his fitness as long as it makes him happy. Either way, we’ll be sure to watch John kicking ass on the big screen in 2016.