There’s a widespread idea that trigger warnings coddle mentally ill people. These arguments are usually made by people who don’t need trigger warnings and think those of us who do should just “grow up.” Initially, I also had reservations about them. I’d first learned about trigger warnings in 2013, the same year I started college. I always disagreed with the coddling argument and knew these warnings helped people survive on a day-to-day basis. But I didn’t realize that they could provide long-term benefits to someone’s mental health.

I found college incredibly difficult. While the academic side was manageable and enjoyable, my mental health began deteriorating. I felt overwhelmed: There were so many opportunities, everybody seemed richer and more sophisticated than me, and I was one soul in a crowd of 20,000. Of those twenty thousand students, one was my rapist.

I had been assaulted by this person years before, but up until college, I had managed to push it to the back of my mind. But denial wasn’t a healthy or sustainable strategy, and I started experiencing horrendous PTSD symptoms. It was compromising my university career, my relationships, and more importantly, my health. So I went to therapy.

After numerous sessions, my therapist and I realized that my triggers had become more powerful because I refused to let myself think about what had happened. As a result, I didn’t work through the trauma, and so any trigger was immensely overpowering. Eventually, she suggested a new approach to our therapy sessions.

“Have you ever heard of EMDR?” my therapist asked.

She handed me an information sheet. “I think it could really help you. We can start doing EMDR sessions, if you’d like.”

EMDR, which stands for Eye Movement Desensitization and Reprocessing, is a form of therapy used to treat people who’ve experienced traumatic events. The aim is to get the patient to process the traumatic event so they can start moving forward from it. As explained by the EMDR International Association (EMDRIA), our brains struggle to process really upsetting or traumatizing events. Because we can’t process the events normally, it often feels like we’re reliving the trauma and our daily functioning ability is impacted. This is where EMDR comes in.

The EMDRIA says this kind of therapy "seems to have a direct effect on the way that the brain processes information. Normal information processing is resumed, so following a successful EMDR session, a person no longer relives the images, sounds, and feelings when the event is brought to mind. You still remember what happened, but it is less upsetting […] Therefore, EMDR can be thought of as a physiologically-based therapy using one's eye movements to help a person see disturbing material in a new and less distressing way."

In a session, a therapist will stimulate alternating sides of your brain to mimic brain processing during REM sleep. They may move their fingers in front of your face, place buzzing devices in each of your hands, tap alternating sides of your body, ask you to follow a light as it moves back and forth, or use another similar technique. During this process, you’ll think about your traumatic event, and your therapist will ask you about your emotional and physical reactions. Over sessions, the therapist will continue this process, but, as explained by WebMD, “will guide you to shift your thoughts to more pleasant ones.”

This form of therapy was hugely helpful to me—but it was also draining. I needed to protect my emotional strength between intense therapy sessions, and I did that by using trigger warnings.

If you have a physical injury and you go to physiotherapy, you’ll probably be told to avoid certain harmful movements so that you don’t harm yourself further. You’ll probably want to exercise your injury and train gently before running a marathon. In time, you’ll heal and regain your strength. Similarly, I knew there was only a certain amount of strain my mind could endure. I had EMDR sessions every Tuesday, and for the rest of that day, I’d be out of service.

The sessions are unsettling in a way that’s immediately painful but ultimately good for you. They unleash a lot of pain, but they ultimately bring relief.

I spent those Tuesday afternoons reading, crafting, and watching TV. I promised myself that I’d avoid emotionally strenuous work. I did the same on days when I felt particularly depressed or anxious. I avoided triggers like articles about sexual violence, movies that depicted rape, and online discussions that dealt with difficult material. Too many triggers led me to feel numb or manic; occasionally, they led to suicidal ideation.

At the very least, I knew an overexposure to triggers would make it impossible for me to concentrate on school work–and as someone attending on a scholarship, I couldn’t afford to put my productivity on the line.

Obviously, avoiding triggers was a difficult task when they were all around me. I was taking a Gender Studies course, which dealt with upsetting content about sexual violence. I also participated in feminist activism, so I was often spread thin when I tried to support other survivors and victims of sexual violence. But when I could, I’d wait and deal with those topics the following day, when I felt more emotionally capable. 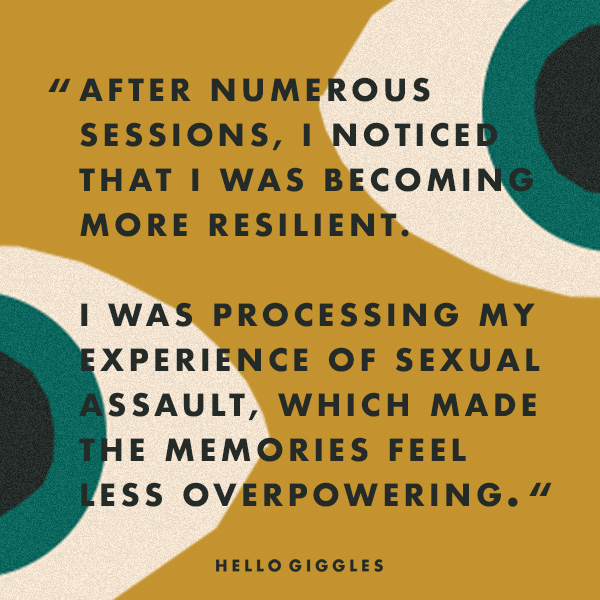 And on those occasions when I could be in control, trigger warnings helped me figure out whether a movie was going to be relaxing or upsetting. They helped me avoid reading Facebook statuses that could render me non-functional for the rest of the afternoon. On the occasions when I wanted to read triggering material anyway—for example, if the material was informative—I could prepare myself mentally beforehand. Trigger warnings meant that I would have the emotional capacity to take on those weekly EMDR sessions.

After numerous sessions, I noticed that I was becoming more resilient. I was processing my experience of sexual assault, which made the memories feel less overpowering. I could deal with triggers better. While some triggers were still painfully strong, I learned to cope. My mental health didn’t improve immediately—it was a tumultuous journey—but EMDR helped immensely.

I wouldn’t have learned those coping skills without using trigger warnings.

Of course, my experience isn’t the same as everyone else’s. I also don’t believe that trigger warnings need to make you resilient to be valid. If someone needs them or wants them, we should respect that, no matter what.