Everything I need to know, I learned from Donna on “That ’70s Show”

I don’t know about you, but I’m feeling Donna Pinciotti.

Look, I know that didn’t rhyme, but stick with me. I am a huge fan of That 70s Show. Something I appreciated re-watching the show as an older person was how wonderfully strong and feminist the women on the show are. Sure, I always loved Kitty, Jackie, and Donna, but watching through a stronger feminist lens had me really appreciating each of them in a much different way. Donna, played by the ultimate badass Laura Prepon, was always my favorite character because I wanted to be exactly like her. She’s tough–physically and emotionally, honest, loving, and hilarious. Because today is Prepon’s birthday, I thought it would be a great time to visit Donna.

All hair colors are beautiful

Before I get into everything wonderful about Donna, I have to mention how beautiful her hair is. Especially knowing that Laura Prepon will go onto rock jet black hair, it should be noted that Donna is a gorgeous red head before she dyes her hair blonde and starts to wear it all adorable and curly. Like, who can wear their hair red, blonde, and black? Magic.

Women can do anything they want to do

When Donna is pissed at Eric for wanting her to stay home with their potential future children, Hyde breaks it down for everyone, perfectly describing just how forward thinking Donna always was.

Females are strong as hell

There is a running joke throughout That 70s Show about how strong Donna is, and I don’t mean emotionally. Donna is clearly the strongest of the entire group, as proven by the many fights she gets into and wins. She can take down Jackie (I mean, obviously), Kelso, Eric, Fez, and honestly probably Hyde. Even with a simple playful shove, Donna can basically break a man’s arm.

Feminism runs in the family

Continuing with my never-ending love of Donna and her progressive feminism, it should be noted that Donna’s character of a mother Midge took some early feminism classes and truly tried her darnedest to embody what feminism meant back in like 1976. Though Midge did a pretty stand-up job of defending herself to her sexist, toupee-wearing, but sweet husband, she still had some points that Donna didn’t always agree with.

Granted, she also had some points that Donna did agree with—like withholding sex from your partner in order to get your way. Hey, I’m not saying I’ve done it, I’m just saying I could see myself doing that. (I can also see myself failing miserably.)

And no, I don’t mean in a romantic sense. Long before the feeling is reciprocated, Jackie declares herself as Donna’s best friend, much to Donna’s dismay. When they first meet, Jackie Burkhart is nothing more than the younger, much more irritating other girl in the group, by way of dating airhead Michael Kelso. Though their relationship is more on-and-off than almost any other television relationship, Jackie manages to stick around, even when she and Kelso (or Hyde or Fez) are in an “off” mode. Slowly, Donna begins to genuinely enjoy Jackie’s company, even inviting her to live with her when her dad goes to jail and her mom bails, leaving her by herself. Though they mercilessly mock one another, everyone knows their friendship is pure.

You can’t help who you love

Donna, though not portrayed as the feminine one of the group, has no problem getting romantic attention. Her cool-girl attitude, unique style, and let’s face it, absolutely stunning beauty always meant that someone was in love with her. Though Eric seems like a total doofus at times, and some viewers may have been rooting for cool guy Stephen Hyde or even someone like Casey Kelso (or even Randy??), we all knew that Donna only had eyes for Eric. Say what you will about your first love, but they usually have a hold on you. Sometimes, it really is meant to be.

Like these two, through broken engagements, blonde dye jobs, Star Wars obsessions, and a journey to Africa.

Though looking back on it now, the fact that Donna landed a DJ job at a major radio station at such a young age seems insane, I always thought it was really cool that Donna went for the job she wanted, even though her insecure boyfriend had an issue with her hanging out with rockstars and being known as “Hot Donna.” One thing I have definitely learned in my life — it is important to have a fulfilling job because that is what you will spend 40+ hours doing every week. Make sure you don’t comprise your work dreams for a dude, even if you’re only in or right out of high school. Maybe especially if you’re only in high school. I mean, if you are offered your dream job in high school, TAKE IT AND RUN.

Don’t give up on yourself

Though I am absolutely the kind of person to follow my heart rather than my head, objectively speaking, I know it’s not the best choice. Right before Donna and Eric are about to head off to Madison for college, Eric’s dad Red has a heart attack and Donna decides to stay in Point Place with Eric. Though I have a lot of very complicated opinions about college and academia in America, the 70s were a different time and honestly, Donna should have gone to school anyway. Red was fine, all things considered, and she and Eric just kind of mulled around doing nothing for years instead of getting a higher education. I absolutely don’t think everyone should go to college, but I 100% think Donna should have.

Just maybe instead of giving everything up, work at making a compromise instead. Not everything is black and white. Eric and Donna could have made it work!

Donna is a psychic

I couldn’t rightfully write this without acknowledging this wonderful moment that everyone on the internet loves so much. 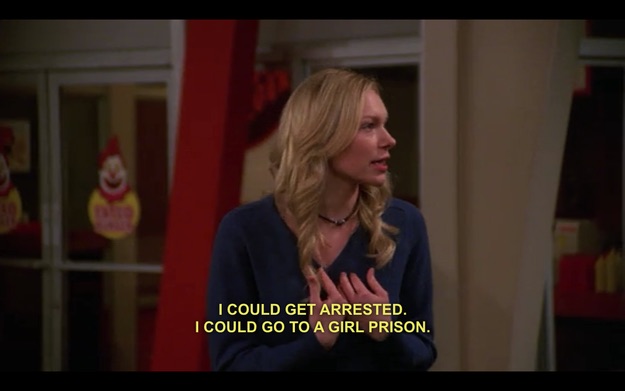