A Dreamer discusses the uncertainty of DACA in the Trump era

He’s the primary source of income for his household, the only father figure his younger sisters have known, and his mother’s better half. All of that means nothing, however, as the Trump administration continues to leave his life — along with about 800,000 more Dreamers — in limbo. Edwin Soto Saucedo is undocumented, a full-time law student, an employee, a taxpayer, and a pillar in his family.

“My mom, my dad, and I immigrated to the U.S. when I was a year old,” Saucedo, a recipient of the Deferred Action for Childhood Arrivals program, said. He emigrated from Mexico City with his parents, who separated when he was 12 years old. A preteen, Saucedo had no choice but to show up for his mother and his three sisters even as the life he’s built for himself in the U.S. has an expiration date.

On September 5th, 2017, President Donald Trump announced through Attorney General Jeff Sessions that the DACA program would be rescinded. Since DACA’s phase-out began, Congress has continually struggled to respond to Trump’s request for a legislative solution. In January, Trump said he would consider offering young immigrants a pathway to citizenship. But, of course, there was a catch — he asked for billions of dollars to pay for a border wall in return.

Trump set a deadline of March 5th for Congress to address a solution for DACA — or else more than 700,000 Dreamers will be deported from the only home they’ve ever known. The Supreme Court, however, put a halt on that deadline. Dreamers can still apply to renew their DACA, but only existing recipients. The case for DACA is now expected to move to the Ninth Circuit Court of Appeals, a process that could take several months. If no legislative solution comes out of this, an average of 915 Dreamers will lose protection and be subject to deportation each day, according to the Migration Policy Institute.

Several more months of stringing Dreamers along, as no concrete legislative action seems to be on the horizon.

Before DACA, Saucedo says he wasn’t a “fully-functioning human.” He didn’t have an 9-digit Social Security number attached to his name — he was “just statistical data.” He couldn’t legally work. He couldn’t legally drive without fear of getting pulled over. The thought of deportation, and leaving his family behind, loomed.

Once DACA was implemented by former President Barack Obama in 2014, Saucedo says, “it was life-changing. It allowed us to basically come out of the shadows, from this dark area we were living in, where we weren’t even allowed to be people.

For Saucedo, being “undocumented and unafraid” has been more important than feeling hopeless. “Although I don’t believe a solution will be coming soon, I’m hopeful that a replacement for DACA or a permanent solution like the DREAM Act will pass.”

His protected status is set to expire May of 2019. Until then, he continues to work in an industry that has helped him support his family financially, and where he has been able to receive health insurance and other benefits he didn’t have the right to access before DACA.

“Thinking about losing my current job has really taken a toll on my emotional stability – I try not to think about it,” Saucedo says. “I have saved up some money for emergency reasons, but if DACA is removed completely, my savings will probably only last for a couple of months before I need to earn a regular income again.”

Without legislative action, Saucedo and his family are back to square one. “It’s heartbreaking,” he said.

His mother wakes up at 3 a.m. to head to work and doesn’t return until 3 p.m. Once she’s home, she continues to take care of his sisters, help them with schoolwork, and get ready for the next day all over again. Saucedo’s mother took up working at a food truck ever since his parents split. “It’s intensive work and sometimes she comes home with burn marks and other injuries” he explained.

Saucedo knew he was undocumented from a young age, but he struggled to internalize the weight of the distinction.

“My cousins, aunts, and uncles would travel to Mexico and I was never allowed. There was always this fear, [my family] always wondered, ‘What if the police came?’ or ‘What if there were immigration raids?’”

Despite the hardships, Saucedo says he continues to put one foot in front of the other to grant his mother “her wish and desire to live the life [she] longed for when [she] immigrated to the U.S.”

Saucedo grew up in the San Fernando Valley, and still resides there – he makes the trek to CSU Los Angeles where he’s completing his B.S. in Business Administration. He’s also a second-year law student at Irvine University, College of Law where he’ll earn his Juris Doctorate degree to pursue entertainment law. On top of that, he works full-time. That’s his life Monday through Thursday, with lectures on Saturdays too.

“Trying to balance both school and work is definitely a lot,” he said. “It’s a large burden to have to take care of my sisters and to make sure they’re ready for school and to be a role model for them. But I know it’s all going to be worth it one day.”

Saucedo’s journey isn’t an anomaly. Life for many Dreamers means having to perpetually prove yourself “worthy” of living in the United States. Worthy of a life they weren’t handed but worked hard for. Like Saucedo, Dreamers have to work twice as hard for facets of life that might otherwise come easily to others. Despite their tireless efforts, they live day in and day out with the understanding and fear that they’re always on shaky ground because DACA doesn’t grant a path to citizenship.

The weight of Saucedo’s undocumented status became clear in his senior year of high school. He was graduating in the top 10% of his class, he was involved in organizations and clubs, and he was the student body president. He did everything he could to receive admittance into “whichever college I wanted to go to.”

Saucedo earned acceptance into UCs, as well as private and out-of-state colleges, but that dream was still out of reach. The out-of-pocket cost was too much for his mother to bear. A Social Security number was required when submitting paperwork for financial aid, but without his SSN, he couldn’t accept many grants and scholarships. He attended community college for two years instead.

In the fall of 2012, he transferred to Columbia College Chicago but could only afford to attend for two semesters. He lived with family members in a suburb west of Chicago, a town called Cicero – he walked 45 minutes to the train station every day and his commute to school was an hour more.

“It was too expensive to pay out of pocket — $22,000 per year — and the state of Illinois didn’t offer any financial aid for its undocumented students,” he explained.

Ultimately, a single-income household couldn’t afford to pay $22,000 in tuition per year, so Saucedo returned to California in the summer of 2013. Shortly after, he received his Employment Authorization via DACA. “I obtained my first legal job and decided to return to community college,” he said.

To Saucedo, education has always been more important than feeling held back because of his undocumented status. 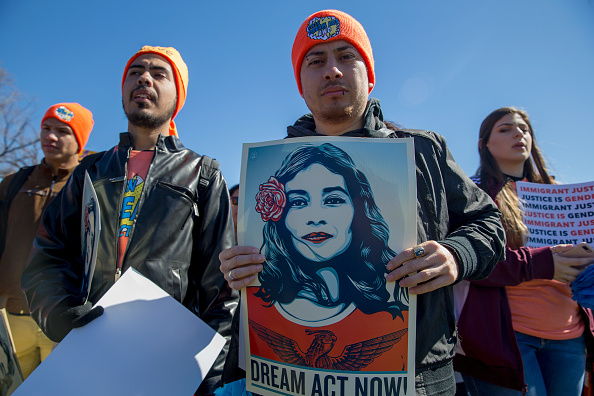 The law-student and business major wants to give back to his community. Saucedo says he wants to work with nonprofit organizations to empower underprivileged youth through the use of visual and performing arts. More than that, he wants to break into the entertainment industry with his law degree to increase representation and “increase the involvement of minorities in the industry.”

All of those aspirations temporarily felt out of reach when he found out DACA was being rescinded. “What’s going to be of my family? Would I have to stop going to school? I’m going to have to get 2-3 jobs to be able to make what I earn now. I’m not going to be able to drive. How am I going to pay my bills?” were just some of the thoughts running through his head on the morning he found out that the Trump administration wanted to send back Dreamers to countries that are not home, without remorse.

“It still affects me, [thinking about it] makes me want to cry because DACA is something we fought for and advocated for, he said. “It’s just being stripped away from us in an instant. That’s all it took.

Since its phase-out began, many immigrant advocates and organizations have not let legislators forget the nearly 800,000 DACA recipients at risk of being criminally stripped of their basic human rights. Organizations like United We Dream, Define American, National Immigration Law Center, among others, have helped DACA recipients educate the public. Dreamers themselves have also continued to fight, with protests, marches, occupations, and sit-ins.

Any day, Saucedo and hundreds of thousands more people could have their protections revoked. Any day, they could be sent back to a country that has never been home, or to a country they fled from because they needed to survive. Lawmakers are not only failing 800,000 Dreamers, but their families, friends and communities by not protecting the very people that make America great.