It’s tough to find the humor in Donald Trump’s presidency. Since the man was elected in November of 2016 and inaugurated in January of 2017, nothing seems funny anymore. Trump has made it clear that he is not a man of the people. He is regularly racist, sexist, transphobic, and just generally unfit to lead a country. Much of the conversation around Trump winning the election or being President came from a place that seemed completely unreal. As if all of a sudden, our country was not a reality, but rather a spoof of itself. There was even talk of how The Simpsons predicted Donald Trump’s presidency since The Simpsons tend to predict the future pretty often.

But this is even nuttier. A mock edition of The Boston Globe from 2016 has reemerged, and it’s really freaking us out. In April of 2016, the newspaper released a fake front page for April 9th, 2017, proving how grim the world would be if Trump actually won. With April 9th just around the corner again, Natasha Bertrand of The Atlantic recently reshared the picture. And it has gone completely viral again.

Exactly one year later, the mock newspaper has eerily and accurately predicted life under a Trump presidency. 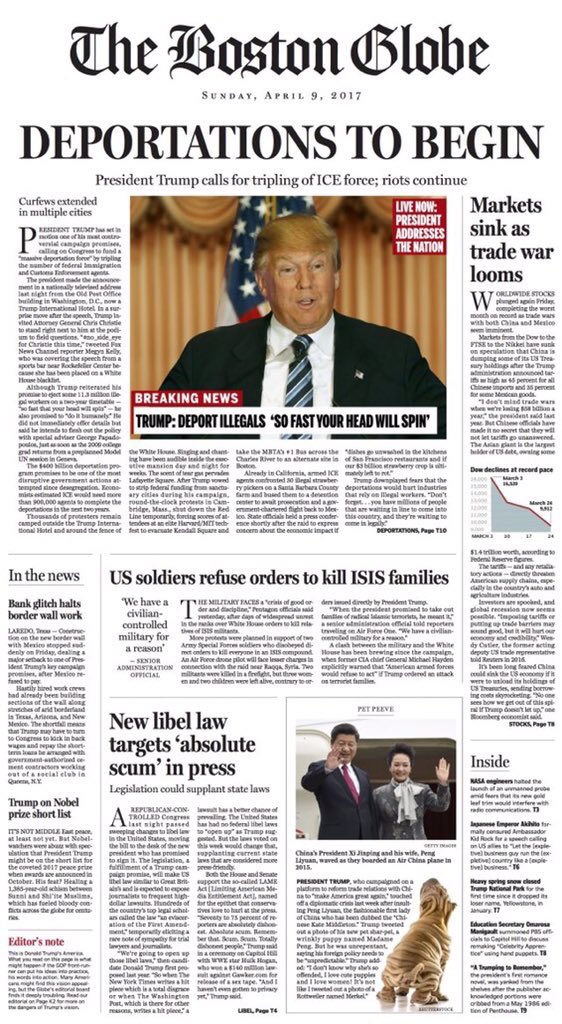 Let’s talk about what the fake newspaper got right.

One of the headlines reads: “DEPORTATIONS TO BEGIN: President Trump calls for tripling of ICE force; riots continue.”

As we now know, Trump is extremely keen on deporting basically any human being that is not a white person. According to BuzzFeed, in his first 100 days, 41,000 undocumented immigrants were arrested by ICE. This was a 38% increase from the year before.

Trump recently announced a series of tariffs on multiple imports including steel, aluminum, and over $50 billion worth of goods. Trade wars are in effect and the Dow Jones dropped 700 points. Last Tuesday, April 3, 2018, the White House threatened to enact a levy on thousands of goods from China. China reacted with its own tariffs on American products. After Trump threatened China, the Dow Jones plummeted another 572 points at the end of last week.

Then there’s this headline: “US soldiers refuse orders to kill ISIS families.”

Though there is not evidence about Trump ordering the military to kill anyone’s families, he has made it clear that he has little empathy for the lives of anyone overseas. When watching a drone strike, Trump questioned the CIA’s choice to wait until the target was safely distanced from his family. Yikes.

This headline barely needs any explanation since it’s pretty clear how often Trump attacks the press. Frequently and boldly, Trump has expressed his disdain for free press and actual journalism.

One of the funnier headlines, which shouldn’t actually be funny at all, involves Omarosa Manigault. It reads, “Education Secretary Omarosa Manigault summoned PBS officials to Capitol Hill to discuss remaking ‘Celebrity Apprentice’ using hand puppets.” Manigault was a White House staffer for a brief period of time before being fired. Though she was not actually the Education Secretary, she may as well have been.

It’s okay to laugh and also be horrified at the accuracy of this totally fake newspaper copy.

It blows our mind that a fake newspaper inspired by Donald Trump tweets could be so insanely accurate in this actual day and age.