Hollywood’s most powerful stylist just coined the “ditzy ponytail,” so naturally we tested it out

It seems that these days, every hairstyle, no matter how casual it is, has a formal “name.” (See: Tucked-in hair.) That said, we were intrigued by the “ditzy ponytail” — so named by celebrity stylist Jen Atkin, whose roster of trend-setting clients include the Kardashian-Jenner family, Katy Perry, Chrissy Teigan, and Jessica Alba.

Atkin recently launched her own hair product line, Ouai. (Pronounced “way,” based on the French slang “ouais.”) Considering her hair star power, the line sold out almost instantly, but she’s released a bunch of hair tutorials that anyone can follow. Our favorite is this one for the “ditzy ponytail,” a teased, dry shampoo-ed, ponytail. So naturally, two of us tested it out.

Christina Wolfgram: Real-talk: I hate the word “ditzy” with the passion of a thousand dumb blonde jokes. But I love trying new hair trends. So here we are. The tutorial was easy enough to follow. Step one — putting my hair into a high pony — went pretty well if I do say so myself. Step two, no so much. Teasing my hair was supposed to transform it from a boring ponytail to a magical unicorn up-do, but instead, it made my ponytail look short and stubby. To pull this off, I think I would need at least eight more feet of hair. Chrissy Teigan, can I borrow some of yours?

Places I would wear this look: The gym, the beach, on a date where I’m trying to look like I don’t care. “This probably isn’t for me”

Lilian Min: My hair is very bleached and very colored, so Atkin’s suggestion to both dry shampoo and tease my hair was kind of terrifying. But, something about those two extra steps made my totally-messy-on-purpose ponytail actually feel more… on purpose? That said, the ditzy ponytail probably isn’t for me — this is a looong-haired-people-only hair hack. My ponytail didn’t have the lift to pull this textured look off.

Places I would wear this look: Whenever I need to run public errands and haven’t washed my hair in a few days, to look extra-fly while hiking or working out, to convince myself that growing my hair out long is worth it (ha) 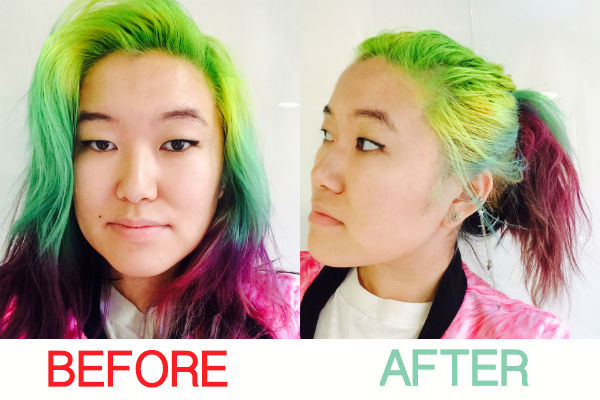 While we’re not sure why the ditzy ponytail has that particular name, Atkin’s extra steps do make us feel like we’re adding something ~*extra special*~ to your run-of-the-mill ponytail. So the next time you’re swooping your hair up for a quick grocery run, take a minute to “ditz” it up — you might find it as weirdly satisfying as we did.

“Tucked-in hair” is THE new low maintenance hair trend. So, we tried it.

I tried reverse hair washing and here’s what happened