These linguists studied female Disney characters — what they found is startling

The most iconic Disney animated film characters are women, due in part to the princess franchise. So, we’re surprised to learn that the percentage of female speaking roles, as well as overall speaking time, in Disney films has actually dropped over the past few decades.

A report for the Washington Post focuses on the preliminary research of linguists Carmen Fought and Karen Eisenhauer, who broke down how much female characters spoke compared to male ones, how many speaking roles went to men vs. women, and how characters complimented female characters. Despite the fact that more recent films like Frozen, Brave, and The Princess and the Frog have been billed and received as progressive, especially compared to more “traditional Disney” fare like Sleeping Beauty and Snow White, Fought and Eisenhauer’s research revealed that in terms of strict by-the-numbers representation, women are overall faring worse.

The researchers split up some of the studio’s most iconic animated films into three categories (Classics, Renaissance, and New Age), and then compared them all on the following criteria: 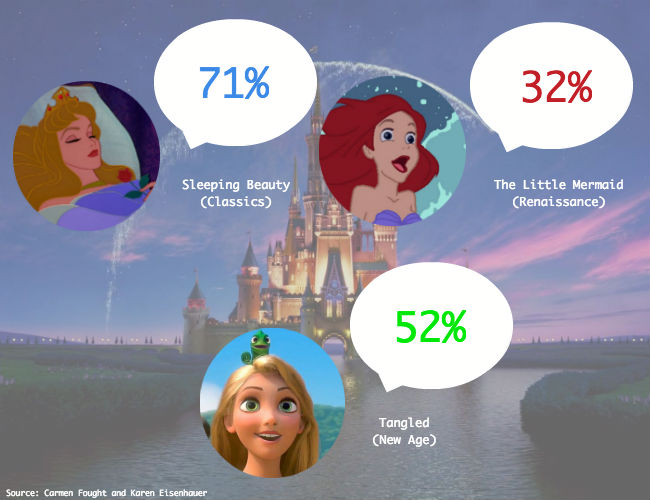 Though most of us associate the older Classics (in the study’s case, Snow White, Cinderella, and Sleeping Beauty) with more outdated gender roles and, in Sleeping Beauty‘s case, a main female character who’s literally mute for most of the movie, these films feature more women in dialogue than men.

Meanwhile, many of the more outwardly progressive Renaissance films have significantly lower female speaking percentages — out of The Little Mermaid, Beauty & the Beast, Aladdin (which admittedly feels like an outlier in this study), Pocahontas, and Mulan, it’s surprisingly The Little Mermaid that has the highest female character speaking percentage, despite also having a main female lead who’s oftentimes not speaking.

As for the New Age films? Brave featured the highest percentage, at 74%, whereas a supposedly as-female-heavy film like Frozen had 41%. The Princess and the Frog only had 25% of its dialogue spoken by women, whereas Tangled hewed close to a 50/50 split.

How is it that many of these films center on female protagonists (and oftentimes female villains, too) and the speaking percentages are still so disparate? Is the male dialogue just denser and wordier? Not quite — it really comes down to not just the lead roles, but how many women fill out a film’s supporting ensemble. 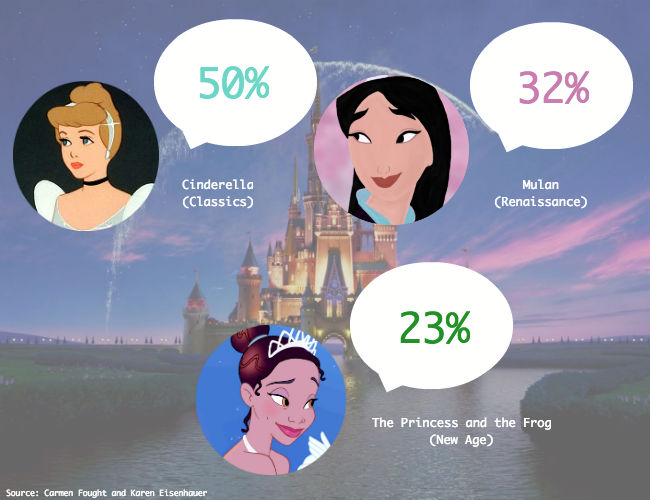 But things haven’t gotten much better from there. Pocahontas features only three female speaking roles out of fifteen total (20%); Mulan, with its male soldier-heavy environment, has ten women speaking out of 31 total characters (32%). Brave and Frozen features 37% and 35% female speaking roles as well, though both films are ostensibly predicated on strong female bonds (mother-daughter and sister-sister, respectively).

The Post speculates that part of the reason behind the continued disparity between Disney film perception and reality has to do with the fact that while the leads are generally female, there’s less care being paid to who’s filling out the rest of the cast: “The chatty sidekick is another good example of a role that goes to men by default. This is a staple character in more recent Disney films, and he — yes, he — often gets some of the best lines. There’s Flounder, Sebastian, Lumiere, Cogsworth, Iago, Genie and Mushu. Why can’t any of them be women? Mrs. Potts, the teakettle from Beauty and the Beast, is the only example of a female sidekick, and she’s overshadowed by the other castle staff.”

So, is there any measurable way that the newer Disney films are actually “better” in terms of gender representation? Yes, and it’s pretty damn important. 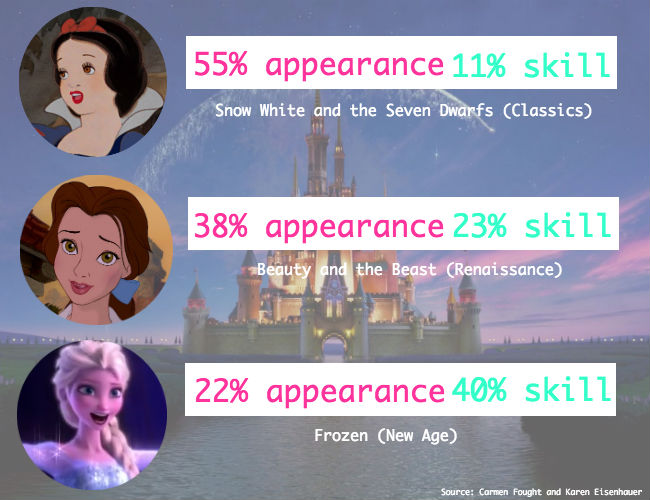 As the Post explains, “Some psychologists counsel parents not to compliment children, especially young girls, on their looks. Even positive comments may lead to body-image problems because they reinforce the idea that appearances are important. Furthermore, studies suggest that it’s better to praise children for their efforts or accomplishments rather than their traits . . . because children are more motivated when complimented on their efforts.”

In this regard, Disney’s been steadily improving — and perhaps the reason that we all have such fond girl power memories of the studio’s later films is precisely because of 1) the meaning, rather than the overall volume, of female characters’ dialogue, as well as 2) the nature of the language used around female characters. And while this doesn’t mean that we wouldn’t still like to see and hear more women speaking in these films, it’s good to know that what they’re saying still has such an out-sized impact — and that’s something no quantitative study can measure.

So, here’s what Disney princesses would actually look like if they were historically accurate