Demi Lovato is someone we know and love for so many reasons, included but not limited to her acting, singing, and outspokenness about mental-health awareness. She’s also a master of trends and all-around badassery — and Demi Lovato’s new lion tattoo is just one example of that.

The new ink (a full lion’s head on the top of her left hand) was done by Bang Bang Tattoo in New York City, and is so cool-looking and realistic we can’t deal.

So imagine our eye-rolling when Lovato suddenly became the subject of comments accusing her of ripping the tattoo idea off of Cara Delevingne, who has a lion tattoo on her finger…her first tattoo, that she got done four years ago.

First of all, this isn’t the Delevingne family crest. It’s a lion — a pretty common animal. Secondly, Lovato’s ink is on a completely different body part. Third, both women got the art done at the same shop, which is obviously a testament to the artist’s talent. (Plus, Rihanna loves it — and, in fact, took Delevingne there for the lion tattoo!)

And lastly (and most importantly): WHO CARES if they look similar!?

Lovato is completely on this same page, clapping back at her naysayers Wednesday on Twitter.

"You can't get a tattoo these days without someone saying you've copied someone or you're 'matching' someone. That's not the case folks," she wrote.

SERIOUSLY, THOUGH. It’s the same shop, which is loved by celebs. It’s not like Lovato walked in and said, “Give me the Cara Delevingne” — and even if she had, it’s her own unique body art, and it’s stunning. 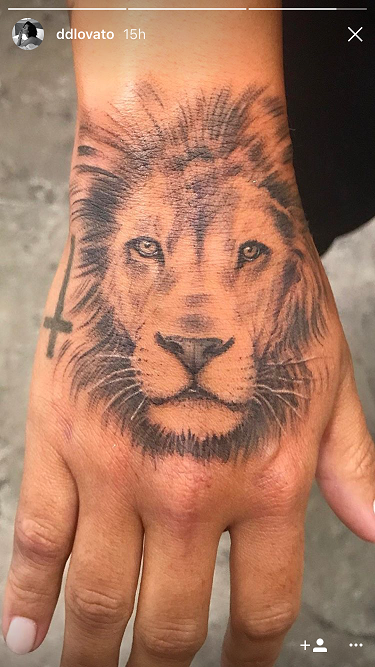 And honestly, we can’t even think of many tattoos we’ve seen that haven’t been done by more than one person. That’s pretty much impossible. So let’s all Google “lion tattoo” and close this case down.

You go, Demi. Keep being your expressive self (and by the way, we LOVE your new tat!).