On a recent episode of her podcast Pretty Big Deal, Ashley Graham described her guest Demi Lovato as “a true beacon of strength.” And as if her killer Grammys comeback performance wasn’t enough to earn that moniker, Lovato’s candid conversation with Graham about struggling with her body image certainly is.

On the podcast, Lovato opened up how, in the past, she would run herself into the ground with workouts and “extreme dieting.” At first, she thought this was her “recovery” from an eating disorder, but she soon realized it was just a continuation, manifesting in a different way. Now, Lovato said she believes her cycle of disordered eating and over-exercising—both of which were exacerbated by external pressure to “look a certain way”—is what “led to everything happening over the past year,” which may be a reference to her drug overdose in July 2018.

“[I was] thinking I found recovery and then I didn’t, and living this kind of lie, and trying to tell the world that I was happy with myself when I really wasn’t, she said on Graham's podcast. “And when I realized I wasn’t happy doing that stuff, I made a choice going into this next album that when I present this, I’m not going to worry about what I look like. I’m not going to worry about trying to look a certain way or fit a certain mold...I’m not willing to destroy my mental health to look a certain way. 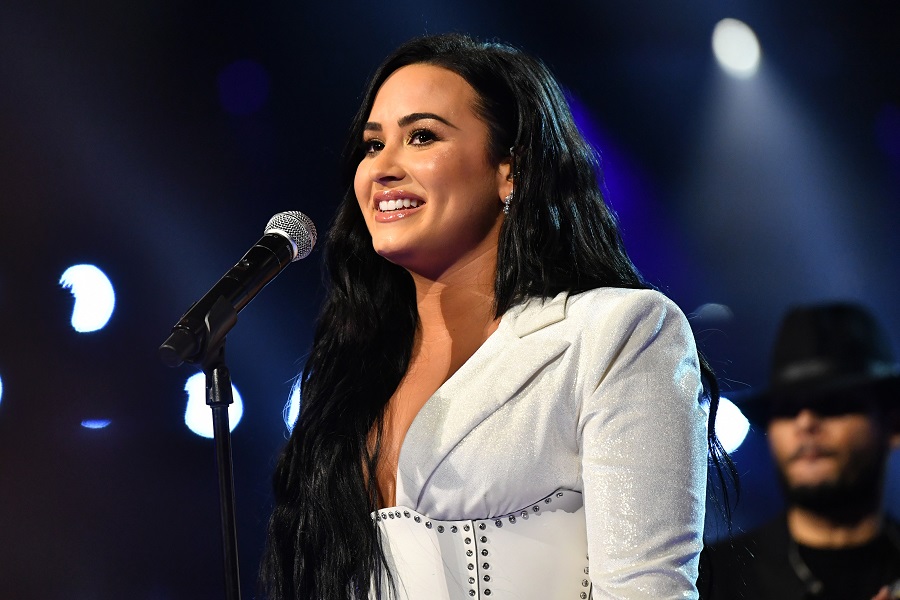 Lovato also shared with Graham some sage advice from a dietician, with whom Lovato worked during her recovery.

“She said, ‘I don’t think it’s so much about body positivity as much as you need to focus on body acceptance,’” Lovato shared.

The singer went on to explain the difference between positivity and acceptance, and how that manifests in her daily life.

"So now when I look in the mirror and I start to have a negative thought, I don’t stop and say, ‘No, you’re beautiful, you’re gorgeous, I love you, you’re perfect the way you are.’ Because I don’t believe that," she said. "So what I say to myself is, ‘You’re healthy. And I accept you.’ So you express gratitude for your health, and you express reality in accepting yourself rather than trying to convince yourself of something that you don’t believe.

The conversation around body image began when Graham brought up Lovato’s unedited bikini pictures, which she posted on Instagram in September along with a powerful caption about self-acceptance. (“I’m just literally sooooo tired of being ashamed of my body, editing it…so that others think I’m THEIR idea of what beautiful is, but it’s just not me,” Lovato wrote.) Lovato explained to Graham that those pictures are symbolic of a larger theme of self-acceptance that she’s now embracing.

“When I go into the next chapter of my career, what do I want it to be?” Lovato told Graham. “Because I’ve always done the ‘sexy’ route. I’ve never really done the whole feeling comfortable in yourself, like I don’t have to be in a one-piece leotard on stage.”

We’re giving props to both Lovato and Graham for their continual openness about these difficult topics—and for giving out free advice, which we’ll be taking for ourselves, thank you very much!

If you or someone you know is struggling with an eating disorder, please visit the National Eating Disorder Association (NEDA) for more information and support or text “NEDA” to 741-741.