3 women share how their dating game has changed during quarantine, for better and for worse

No matter how you spin it, dating is a tricky business. Just finding someone you want to date is tough enough, but initiating the first date and actually going on said date is a whole other process. And now, the coronavirus (COVID-19) pandemic has put the entire dating world as we knew it at a standstill. While not being able to go on a date for months has been a relief for some singles who typically stress about their love lives, others are feeling disheartened. If that’s the case for you, it doesn’t have to be—as long as you’re willing to step outside of your comfort zone.

If you’re an online dating virgin or are typically against the activity, now’s the time to start swiping, because dating app demeanor has never been more geared toward genuine human connection than it is today. While the whole point of online dating is to eventually meet someone in the flesh, that current impossibility means that people are tapping “match” when they actually want to get to know someone—and not just for a physical endgame. Normally, the messaging phase on dating apps tends to last for a brief week or two before matches meet up. But now? This period is going on for much longer, as having solid conversations feels more important than ever before.

“I feel like online dating is a little higher stakes now, because you’re building a deeper connection,” Caroline Nead, 27, tells HelloGiggles. “Call me old-fashioned, but I kind of like it. You can really see if you have anything in common, and it’s a bit like having a pen pal. At the end of all this, it makes it more exciting to meet them, and the physical tension is stronger.”

During quarantine, the dating world is turning back to old-school romance. Okay, singles in 2020 might not send a handwritten letter to their crush, but meaningful texts and phone calls are more likely since no one can meet up for a drink.While the idea of building an emotional connection before a physical one scares some singles, others have the opposite view: They feel less pressure while unable to meet matches face to face.

“Since I can’t meet people in person, I’m less scared of getting ghosted,”Chelsea Saunders, 25, tells HelloGiggles. “There’s always a possibility of finding a great new connection online—even if it just becomes a platonic friendship, or even if it’s just a new person to play ‘Words With Friends’ with.”

Saunders notes that the crisis has brought deeper topics, like unemployment and healthcare, to the forefront of her conversations. “I’ve bonded with matches by talking about the need for socialized health care,” she explains. “There are also a lot of guys online who lost their jobs, or were in a job transition when COVID-19 happened. It gets personal real fast.” Amid the flirty, surface-level small talk that often floods dating apps, this intimacy can be refreshing.

“Since everyone is in the same boat, there’s a level of relatable vulnerability,” Saunders says. 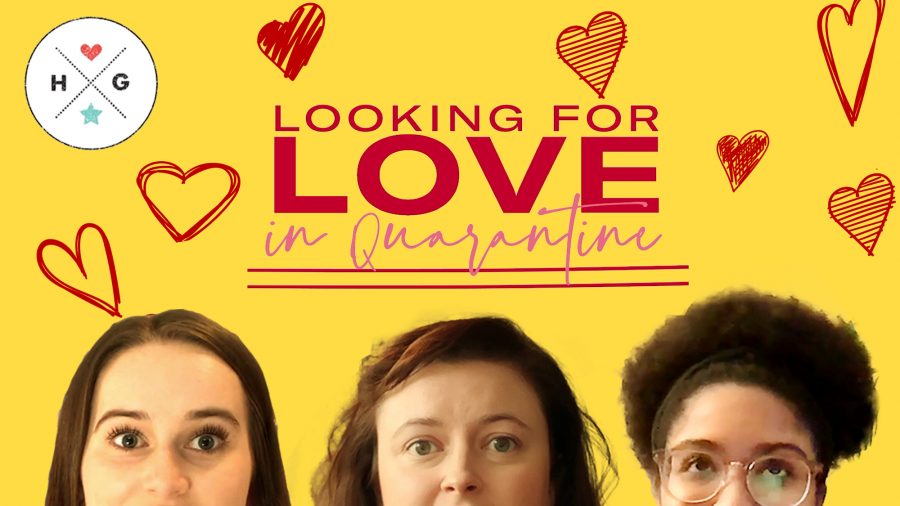 The quickest way to get to know someone on a dating app? Over video chat. Although meeting someone via video might seem daunting, more singles are open to it now than ever before. After analyzing its users’ activity over the past month, dating app The League saw a 41% increase in video usage on its app and over double the attendance in its weekly video speed dating session, League Live, from March to April, according to a press release. Hinge, meanwhile, wrote in a press release that, according to a recent study it conducted, 70% of its members were open to virtual dates, so it has launched “Date from Home”—a feature where users can alert the app when they’re ready to transition from messaging to a video date. Once both matches select “Date from Home,” Hinge notifies them, and they can connect via video without feeling weird for suggesting a virtual date, because they already know they’re both up for it.

Saunders went on a drinks-followed-by-dollar-slices-date with a Hinge match the day before New York City ordered a shelter-in-place order. Now, five weeks into quarantine, the pair is still talking, and they’ve gone on video datesto keep their initial spark alive. “At first, things were awkward,” she says. “I felt bad about how many times I cut him off accidentally because of audio lags! But knowing our situation is weird takes the pressure off of trying to be smooth.”

While the move to virtual conversations doesn’t eliminate normal pre-date jitters, it does relieve some of the pressure. There’s no need to spend an hour finding the ideal outfit, curling your hair, or perfecting your mascara.

I’m in a sticky dating situation myself. Similar to Saunders, I went on a first date with a Hinge match in early March.In a twisted trick of fate, this was the best first date I’d been on since moving to the city eight months ago. During those first two weeks of knowing each other, we went on six fun and romantic dates. Things were moving fast, but then quarantine brought everything to a screeching halt. I flew home to Iowa to be with my family, and he stayed in N.Y.C. Now, five weeks later, we’re still talking every day, but it isn’t easy.To avoid falling into the “what’re you up to?” and “nothing much” texting cycle, we’ve been FaceTiming, and, as as result, this guy has seen me in glasses, no makeup, and sweats much sooner than he would have if we were still able to go on IRL dates. This expedited vulnerability has made us bond faster than we probably would have had we still been in the thick of our busy everyday lives. After all, if he’s into me while I’m wearing a tattered hoodie and haven’t washed my hair in three days (and if I feel comfortable rolling up to our FaceTime date like that), that’s a good sign.

And although we never defined our situation before quarantine, there’s been a mutual understanding that we want to keep it going. Planning dates for when life returns to normal keeps us hopeful and gives us something concrete to look forward to, even though the timeline is up in the air. For now, we’ve used the Netflix Chrome extension to binge Stranger Things together, gone on “virtual walks” (aka talked on the phone while walking around our respective neighborhoods), and consumed many glasses (er, bottles) of wine over video.

We’ve both made an effort to show that we’re still thinking about each other even though we can’t be together. Recently, for instance, he had a bad day, so I sent him an e-gift card to a pizza place in his neighborhood we ordered from pre-quarantine. Another time, after I complained to him about my family being loud while I’m working, he made me a playlist to help drown out their chatter while I write. Gestures like these are small, but when they’re all we can do for each other, they hold a lot more weight.

Saunders and her pre-quarantine date have also sent each other thoughtful care packages while they’re apart and have kept things interesting by playing games over FaceTime—including strip trivia. “Playing games with a date is great, and you can spice them up depending on how comfortable you are,” Saunders says. “The best part is trying to be flirtatious over video chat. It’s not easy to do, and there will be a lot of laughs. It keeps the romantic tension going, despite the long distance.”

As more and more weeks of self-isolation rack up, dating during quarantine is becoming easier and more effective. If you’re still on the fence, remember that—whether you’re craving a human connection or you’re just bored as hell—you never know who could be waiting to match with you on a dating app.