Did you spend all weekend binging Netflix’s new Marvel show, Daredevil? Great, because I did, too. So there are going to be spoilers ahead for Season 2. If you haven’t finished your binge, or haven’t started, turn back now. I’m serious!!

In truth, I thought this second season was mad confusing. There were so many forces at play, and so many things were happening, and Foggy’s haircut changed like every other episode, but that’s not what we’re here to talk about right now. We’re here to talk about the biggest, and most frustrating, unanswered question for Season 2. It’s a question that has been keeping me up at night. It’s driving me crazy.

What happened to Frank Castle’s dog?

It’s not really clear how Frank got this dog. Correct me if I’m wrong, but he like… steals it from the Irish Mob? Like I said, Daredevil Season 2 is #CONFUSING. But it’s his dog, and he loves it, and he takes it for walks, and when the Mob goes his place to find him, instead they find the dog. So, they take the dog as a hostage in order to get Frank to talk. The dog is then threatened with a power drill.

Cut to me sitting on my couch, yelling at my inanimate television, DON’T YOU DARE HURT THAT DOG, DAREDEVIL. IF YOU HURT THAT DOG I AM TURNING THIS OFF AND NEVER WATCHING ANOTHER EPISODE EVER AGAIN. Because maybe you’re like me, and cannot deal with injured dogs on TV or in movies, or even worse, dogs that die, and just the thought of Marley & Me makes you burst into tears.

It’s possible that Daredevil heard me yelling, because the next moment Frank agrees to talk about the money’s he’s hidden, and the Irish Mob’s happy about that. They take the dog away, and there’s a moment where the dog tries to get back to Frank, and my heart broke a little bit again.

But phew, the dog is safe! The dog’s away from the melee that erupts, where Daredevil and Frank take out every member of the mob. Hooray for our heroes (anti-heroes) saving the day! Time for a happy Frank-and-dog-reunion, with so much face licking and tail wagging!!

Except that doesn’t happen. We never see this dog ever again. Daredevil and Frank make it outside to the cemetery, and then Frank is taken into custody, and Daredevil disappears into the night.

So what happens to THIS DOG?

Friends, I finished my binge 24 hours ago, and I can confirm that we do not see this dog again. This dog is completely gone.

This is really bothering me because the greatest Netflix and Marvel venture to date, Jessica Jones (sorry, not sorry) actually takes a moment to address the safety of some dogs in question. Jessica and Luke Cage come across some dogs, but they don’t hurt the dogs, and Jessica even asks about the dogs mid-fight, because she’s that damn good.

I was like, “Thanks for mentioning this, Jessica, I really needed to know.” Because I did need to know, because I can’t handle it when dogs get hurt.

Which brings me back to Frank’s dog, because WHERE IS IT??? WHERE IS THE DOG??? Are we supposed to assume that this dog, having been wronged by crime, has decided to become a masked vigilante itself and next season it’s going to be Daredevil & Dog? Is the grand return of the dog being saved for Season 3? And didn’t you kinda want Frank to go off on his own Punisher path, wearing a skull t-shirt, with this dog by his side? I did.

Except that the dog is G-O-N-E. 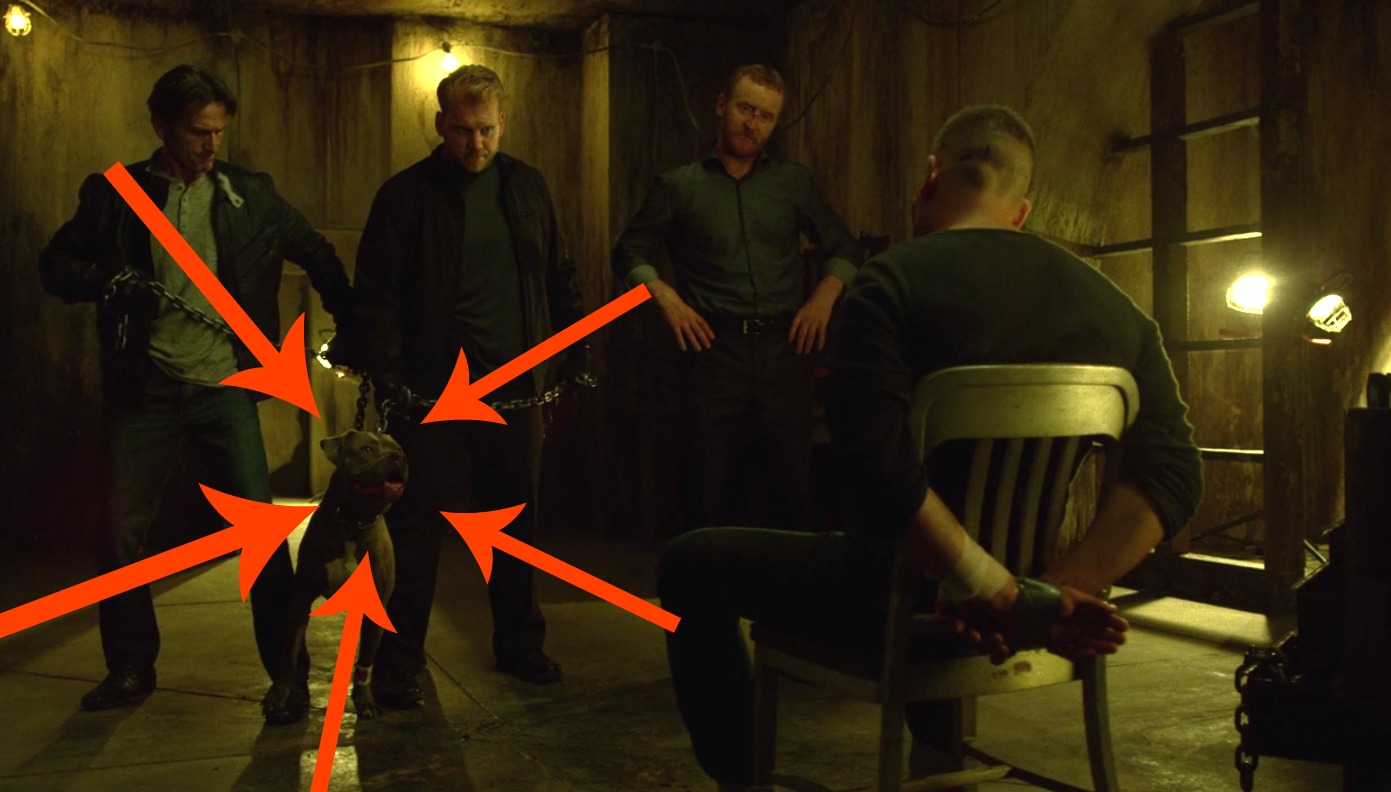 So where’s the dog, Daredevil? I need answers. I (im)patiently await your official word response.