Last night marked the 50th Anniversary of the Country Music Association Awards and the best of the best country singers came out to show their support. The best part of the show — besides the great musical performances — was watching country music’s most adorable couples hit the red carpet.

From some of country music’s biggest stars, who also happen to be married — we’re looking at you Tim McGraw and Faith Hill — to some of the genre’s newcomers with their significant others, the night was full of duos that helped restore our faith in celebrity realtionships. See which pairs were the absolute cutest below:

McGraw and Hill are country music royalty and pretty much one of the best celeb couples ever. They've been married 20 years and they continue to steal the show in our minds. Come on, just look at that color coordination!

"Damn I'm Lucky!" the "Humble and Kind" singer captioned the sweetest photo of him walking with his wife back stage last night.

Seriously, could they be any cuter?

The adorable Kimberly Williams-Paisley usually hits the red carpet with her husband, Brad Paisley, but since he was hosting the award show, she hit the carpet with longtime friend, Jennifer Garner and together they looked fierce and fabulous.

Ugh, we can't handle all this cuteness between Aussie singer, Morgan Evans and his girlfriend Kelsea Ballerini, who was nominated for Female Vocalist of the Year.

Single of the Year winner, Thomas Rhett slayed the carpet with his velvet suit as his wife, Lauren Gregory, stunned in a bold, blue gown.

"Love you babe," Rhett captioned a precious mid-show photo of him and his beautiful wife, again making us SO jealous of their relationship.

The handsome men of Florida Georgia Line had even more eyes on them by posing with their gorgeous wives at the award show.

We are obsessed with Brian Kelley's dapper hat look and his wife, Brittney Marie Cole's red-hot gown. Tyler Hubbard and his wife Hayley Hubbard on the other hand opted for a more subtle color palette and looked equally as fabulous.

Newlyweds, Josh Davis and RaeLynn, who tied the knot in February, are clearly still in the honeymoon phase of marriage and they are just too cute.

Country music legends, Garth Brooks and Trisha Yearwood looked stunning as they posed together, before Brooks took home the award for Entertainer of the Year at the end of the night.

"Standing next to the QUEEN makes any day a great day, but especially today! love, g #CMAawards50," Brooks captioned a sweet photo of him and his wife after their great night.

Well, this is just cuteness overload!

Our favorite couple of the night however, was the show’s hosts, Paisley and Carrie Underwood.

Their jokes, musical chops and awesome ensembles make them easily the night's best duo, even if they aren't a real-life couple. 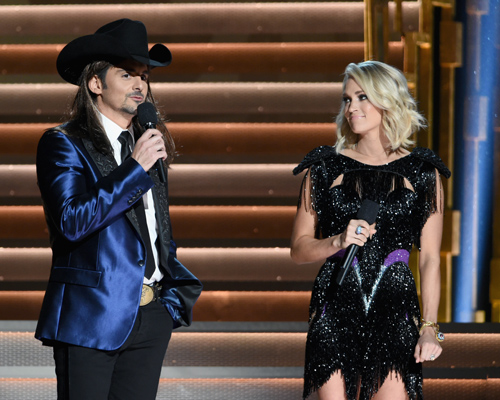 Which couple was your favorite from the 50th Annual Country Music Association Awards?