Content warning: This essay discusses surviving sexual assault, and is being republished in light of Monica Lewinsky’s new essay in Vanity Fair, which discusses how she was essentially gaslighted — her story taken from her and manipulated — in the midst of the Bill Clinton scandal that defined the late ‘90s and a large portion of her life.

I am a female comedian in New York. From college onward, about three quarters of my close friends and collaborators have been men. I cherish these friendships deeply.

Unfortunately, men have largely been taught by society to gaslight women who have survived sexual assault. For those who don’t know, gaslighting refers to manipulating someone (often, a woman) into questioning her reality and her sanity, making her uncertain of her beliefs and experiences.

Even multiple-degree-holding, liberal, creative men can be incredibly vapid when it comes to helping a female friend through something like this. When your friends gaslight you, than when it comes from someone who you would expect less from. You have convinced yourself that, since your smart and funny male friends read James Baldwin and watch documentaries, they must have a deeper understanding of humanity. Therefore, they will be perfect listeners. The pang is that much deeper when they disappoint you.

Based on my experiences, I’ve gathered a few steps that can help us cope when our male friends gaslight us about sexual assault. 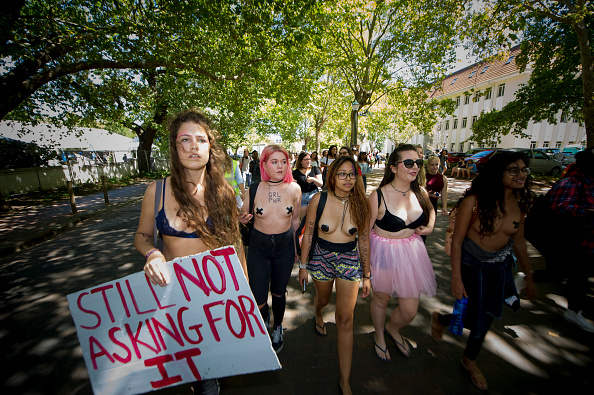 1Speak up — or don’t. It’s not your responsibility to educate them.

About 50 percent of the time, especially as I’ve gotten older, I shut down men around me who say damaging things about women that perpetuate rape culture. I used to fear seeming uptight or “uncool,” especially around older guys who I admired that were more successful in comedy than me. Now, I care far less about how I “seem,” and far more about speaking my mind when issues that they’ll never understand are flippantly thrown into the discussion.

That other 50 percent of the time, I am tired. I am sad. I am broken. I am exhausted from providing constant free education to my male friends about rape culture and its nuances. To respond to an ignorant remark, explain its implications, and rattle off the stats I know by heart would make me relive a trauma. It is okay to take care of yourself by saying nothing. You have every right to get up and leave, stare at your phone, or daydream about Jake Gyllenhaal’s eyes while the uninformed men around you embarrass their gender. It is not on you to clean up after them, and survivors especially should not feel this weight on their shoulders. By the very nature of having always lived as a man, men simply can’t understand the loneliness of being a woman, or the constant fear of harassment that has been a part of our bone marrow for our entire conscious lives.

Additionally, if you didn’t say anything, but later wish that you had, you can always shoot them a text or an email the next day. If they are making the proactive effort to understand the situation, to apologize, and to change, then you can send them book recommendations like Missoula: Rape and the Justice System in a College Town by Jon Krakauer, or documentary recommendations like The Hunting Ground.

If they aren’t open to listening, or become defensive, (“I was just joking around!” “But I’m really a good guy. I went to the Women’s March!” “Free speech!”), that is a clear sign that you can end the friendship. They are not worth your fight. Dr. Maya Angelou wrote, “When people show you who they are, believe them.”

2If you and a male friend have a falling out, you may fear what mutual friends will think. Don’t.

If you decide that you do need to break things off — whether temporarily or permanently — with a male friend due to his gaslighting, it is perfectly normal to worry what your mutual friends will think. How are you going to explain it to them?

This is not on you.

It is not your responsibility to send out a city-wide memo about what is going on. Life is too fleeting and our moments are too precious to worry about an ancillary person in your life who believes gossip about you. Your true friends will reach out to you and remain supportive. Your toxic ones won’t.

It is imperative that you focus on self-care. You do not need to prove anything to anybody. Skip that big party if you want to. Don’t reply to everybody’s inquisitive texts today. I am disheartened to admit that we live in a society that places all of the onus of the emotional labor post onto the victim. You should absolutely speak out if you want to. But if that is beyond what your self-care prescription calls for, then that is unequivocally okay, too.

This goes without saying, but counseling is absolutely recommended post-trauma — regardless of any of the social implications that follow or not. It can be especially helpful when people in your life who are supposed to be there for you suddenly aren’t.

3It’s hard to let go of good memories, but don’t beat yourself up if you have to.

One of my closest male friends from college (we celebrated my 20th birthday together, I spent a Thanksgiving with him and his family) is not in my life anymore. We have years and years of memories that still run like a sappy Kennedy Center Honors montage in my head every once in a while. After I told him my experience with sexual assault, his tone became strange and silent. He told me that “most of those guys are proven innocent,” and that when I publicly wrote about how our college newspaper mishandled the reporting, it “really inconvenienced” his friend who worked at the paper.

It took me a long time to love myself enough to admit that our good memories were not enough to make his invalidating comments acceptable. If he couldn’t be emotionally available in my optimum time of need, there was no midnight movie screening or laugh-filled burger outing that was going to matter. I tried to venture onward like the strong, “cool” female friend I was supposed to be, but we were never the same after that. I remember writing to him, “I leave every interaction with you feeling worse about myself than I did before the interaction.”

I was constantly agonizing about the fraught way that it ended because I was sentimental about our good times. One day, I was crying on my couch, expressing my fears to my best friend. Does our ending it mean that our friendship never meant anything? That our good memories were all a waste of time?  My best friend talked me down. “Every memory was worth it, because it brought you happiness in that moment, and every single experience you have teaches you something. You would not be you today if all of that had not happened.”

If you are a survivor of sexual assault and you need help, call the National Sexual Assault Hotline at 800.656.HOPE, and learn about more resources here.