We are very confused by this school’s prom dress code

Well, spring is coming soon. And you know what that means: It’s problematic prom dress code season. Students at Ceres High School in California are currently battling with their school over the prom dress code, which they believe unfairly targets girls.

Last year, Ceres student Nada Abdo was almost kicked out of prom for wearing a dress that had a see-through patch on top. “You can barely see through the black, but I was still told to cover up,” she told CBS Sacramento about the dress, pictured below left. 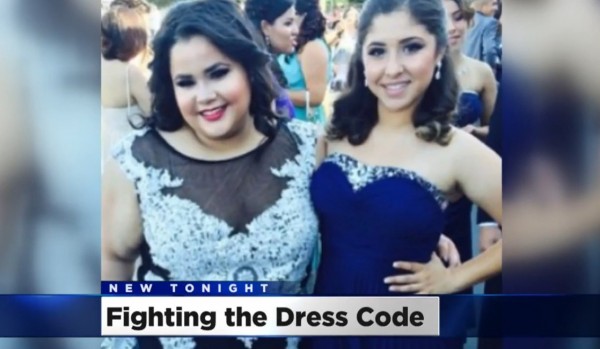 This year, students are required to sign a contract about the dress code before they even are allowed to purchase tickets. . . or else they’ll be denied entry. Nada told CBS that the rules seem reasonable when you read them in print, but at the dance, they’re enforced very strictly by the activity’s director. And now, Nada’s newest dress, pictured below, has been rejected for having an opening in the back that’s considered too big. 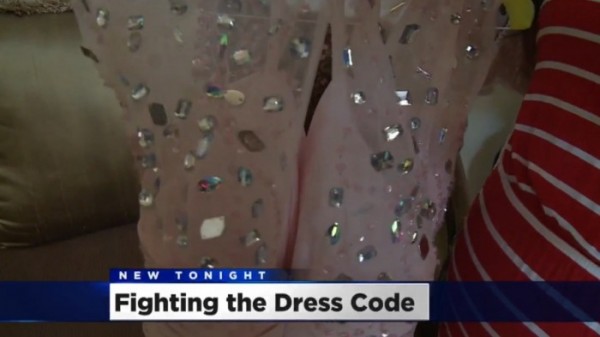 “We’ve been looking online, but a lot of the dresses conflict with the code. I don’t know what to do, especially since I’m plus-sized,” Nada explained. “I have an even more narrow set of dresses that I can choose from.”

Nada says that the dress code is much, much stricter for girls than it is for guys. “There’s only, like, one rule against males, and like 20 of them against girls,” she said.

Nada believes restrictions should be set by parents, not by the school. “My parents are Arab American, so my parents are already very strict,” she said. “So I feel if my parents will let me wear a dress, they shouldn’t have any problem with it.”

Ceres assistant superintendent Jay Simmonds told FOX40 that this is a non-issue. “Our concern is that the young lady, to our knowledge, has not talked to school officials regarding the dress she wants to wear this year. Therefore to us, this is not a story,” Simmonds said.

As for Ceres junior Samuel Garcia, he feels the dress code is restricting — especially to young women. “It’s not like the dresses are doing anything, it’s just so people can feel nice when they’re wearing them,” Garcia told FOX40.

But one mom would take it a step farther. “I think [the dress code is] a good thing ‘cause that’s what it’s there for, for the kids to get dressed up,” Jacquelyn Martin, a parent to two Ceres boys, told FOX40. “But I would step that up. I would be like, ‘Oh no. You’re not wearing that.’ But some of the things you see are crazy.”

Ceres students have been taking to Twitter to express their agreement with Nada’s claim, and coming up with ideas how to protest the code:

Even students from other schools know how strict Ceres’ dress code is:

Maybe we should stop sexualizing every part of a young girl’s body at the cost of self-expression. If a girl feels beautiful in a dress, let’s let her feel beautiful — and instead focus our energy on making sure prom is a safe place.