A computer is frantically giving guinea pigs the cutest names ever

We interrupt your regularly scheduled Saturday to bring you a truckload of adorably named guinea pigs. In one of modern science’s greatest feats of technology, someone programmed an AI machine to create names as cute as the guinea pigs themselves.

Here’s how this all came about. Portland Guinea Pig Rescue is constantly getting tons of new animals to put up for adoption, and can’t come up with lovable names fast enough.

So the nonprofit asked research scientist Janelle Shane to build a neural network that comes up with — you guessed it — guinea pig names!

In order to create the network, Janelle needed to begin with some existing monikers. So the PGPR gave her 600+ to start with. Pretty normal names, like Snickers, Pumpkin, etc., etc.

Then, she fed the list to the AI, so it could learn some good names for guinea pigs.

If you’re a tech nerd, here’s what Janelle told Gizmodo about how she trained the network.

“I used Andrej Karpathy’s char-rnn, an open-source neural network framework for torch (written in Lua), Janelle told Gizmodo. “I gave the neural network the list of 600+ guinea pig names that the Portland Guinea Pig Rescue assembled for me, and let it train itself to produce more names like the ones on its list. It gradually formed its own internal rules about which letters and letter combinations are the most quintessentially guinea pig.

It only took a few minutes to train the system. Janelle had to strike just the right balance, so that the AI could get creative, but the names would still have that guinea pig je ne sais quoi.

Below, some of the lovable fluffs with their new names (and btw, you can adopt these little guys!!): 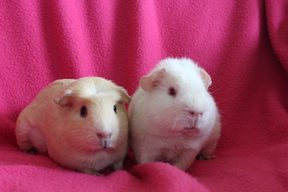 The names are pretty good, no?! Props to Janelle’s neural network.

However, the good names didn’t come without the bad. Butty Brlomy, Boooy, and Bho8otteeddeeceu were some early iterations that weren’t used, for obvious reasons.

As for her personal favorites, Janelle told Gizmodo:

“I am a big fan of Fufby and Fuzzable and Snifkin, partially because they’re so quintessentially guinea pig. The neural network really picked up the spirit of the guinea pig names.