Author Michael Arceneaux reflects on Felicity Huffman’s apology for her participation in the college admissions scandal in context with the several Black parents who have been imprisoned or fined in recent years for sending their children to school districts with more resources.

As disappointed as I am in the artist formerly known as Lynette Scavo, I will admit that unlike many public figures, actress Felicity Huffman issued an apology that did not make me want to roll my eyes all the way down to the back of my knees.

In a statement issued on Monday, Huffman said, “I am pleading guilty to the charge brought against me by the United States Attorney’s Office.” Then came the real mea culpa. “I am in full acceptance of my guilt, and with deep regret and shame over what I have done, I accept full responsibility for my actions and will accept the consequences that stem from those actions,” the statement read.

She went on to note she was “ashamed of the pain” she caused those closest to her before offering an additional apology “to the students who work hard every day to get into college, and to their parents who make tremendous sacrifices to support their children and do so honestly.” 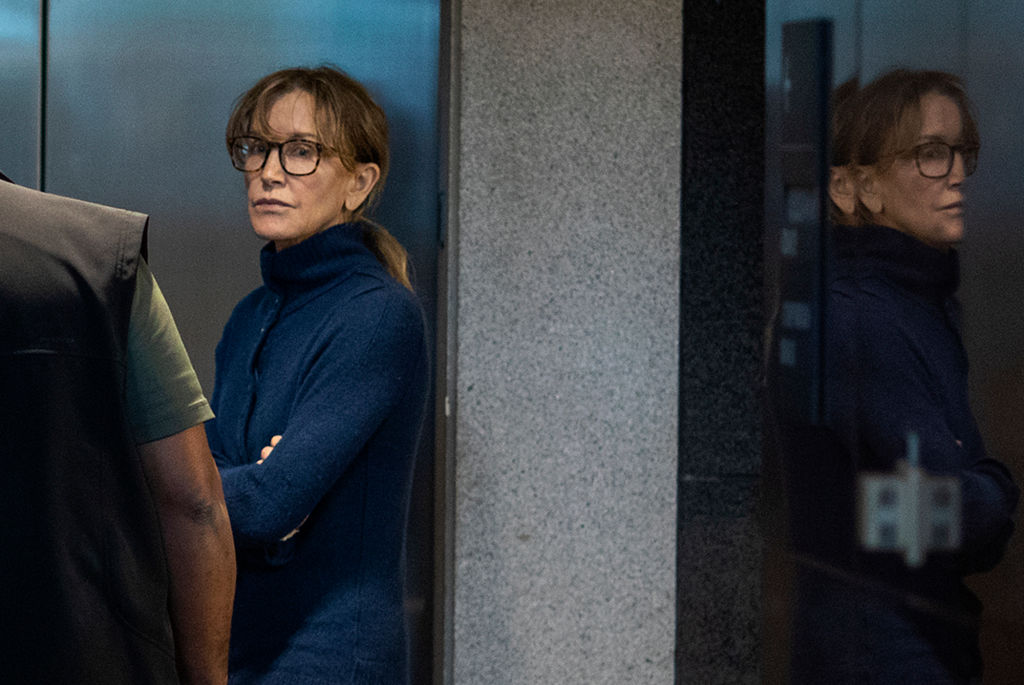 Huffman was arrested in March as part of the investigation into a college admissions scam in which rich folks like my old second-favorite Desperate Housewife here participated. In the case of Huffman, she allegedly paid $15,000 to have an SAT proctor correct her daughter Sofia’s incorrect scores after she turned in her test.

Now, this apology from Huffman in no way absolves her of wrongdoing. And as no stranger to cynicism, I am fully aware that as talented an actress as Huffman is, her career is dead if she can’t get the public to be less repulsed by her actions and the character that informed them. A genuine, detailed apology is the first step in attaining that goal. Still, I’m glad at least one of the more high-profile participants in this college admissions scandal has bothered to attempt to convey acceptance of guilt and offer to make penance.

However, Huffman’s legal woes are reflective of a society in which white, well-off people enjoy privileges allowing them to effectively be treated better than the rest of us after they commit wrongdoing. So, as much as I appreciate signs of remorse, I’m cautious over how those aforementioned privileges will once again allow Huffman and co. to avoid receiving special treatment.

In response to reports of a plea deal for Huffman and other co-defendants, it appears that many legal experts think that while prison time is a real option, it might not be for long. In the case of Huffman, I’ve read that she may face as little as four months in prison—or possibly none at all.

This is not how it goes for others with the shared goal of advancing their children’s education with far less resources.

In 2011, a Black woman named Kelley Williams-Bolar was convicted of lying about her address to get her daughters into a better school district in Ohio. WIlliams-Bolar was sentenced last week to 10 days in county jail, placed on three years of probation, and ordered to perform 80 hours of community service. At the time, Williams-Bolar said, “I don’t think they wanted money. They wanted me to be an example.” Presiding Judge Patricia Cosgrove acknowledged as much, noting, “I felt that some punishment or deterrent was needed for other individuals who might think to defraud the various school districts.”

In 2012, Tonya McDowell, another Black woman, was sentenced to five years in prison for sending her son to an elementary school in Norwalk, Connecticut, instead of her home city of Bridgeport. Police claimed McDowell stole $15,686 worth of “free” educational services from the city of Norwalk. She was homeless at the time she was charged with grand larceny.

That same year, Olesia and Hamlet Garcia were charged with criminal theft of service charges. Following a separation, Olesia moved their 5-year-old daughter from Philadelphia to her father’s home in Montgomery County. The couple eventually reconciled, but they kept their daughter in her newer school for the last two months of the school year. Though the charges were eventually dropped, they initially faced up to seven years in prison. Reduced charges were still issued, and the Garcias, along with Olesia’s father, Grigori Sofitchouk, were ordered to pay restitution in the amount of $10,752.81 to the Lower Moreland School District.

While not directly related to education, I can’t help but think of Crystal Mason, a Black woman who made headlines last year after being sentenced to five years in prison for casting a ballot in Texas. Mason arrived at a polling station to find that her name was not on the register, so she decided to cast a provisional ballot that was never counted. But as The Guardian noted last fall, Mason “did not read the small print of the form that said that anyone who has been convicted of a felony–as she had, having previously been convicted of tax fraud–was prohibited from voting under Texas law.”

I don’t wish prison on any of the people involved in the current college admissions scandal, but one can’t help but be frustrated by the realities of our justice system. All of these people are guilty of making a mistake, but can anyone say Felicity Huffman is being treated as equally as her nonwhite, not rich counterparts that I just described?

Yes, prosecutors have recommended a range of sentences for those pleading guilty to their roles in this scandal, but it just goes to show how many more options one yields when they have the complexion and cash to help compensate for their crimes.

However, some of those involved don’t know how good they continue to have it. Actress Lori Loughlin did not join Huffman in the plea deal and now faces even more charges that yield greater risk of prison time—including money laundering.

“She has been in complete denial and thought maybe she could skate by,” a source told E! News. “She refused to accept any jail time and thought the DA was bluffing. She was adamant she wouldn’t do any jail time.”

I don’t know what will happen to Loughlin, but as puzzling as it seems that she didn’t take the plea deal, I will say I can understand her hubris. After all, if anyone is usually punished for fraud for the sake of boosting their kids’ education, it’s someone who looks more like my mother than Aunt Becky.

As far as moving forward in the Loughlin case, a “legal source close to the case” tells People, “They really want to make sure that there isn’t this perception that these people are able to skate by because they’re rich. They want to make sure everyone is equal in the eyes of the law.”

I still have a hard time believing that will happen, but if it does, I’ll chalk it up to Loughlin’s arrogance negating her privileges, rather than our justice system learning to look past them.

Michael Arceneaux is the New York Times bestselling author of  I Can’t Date Jesus from Atria Books/Simon & Schuster. His work has appeared in the New York Times, the Washington Post, Rolling Stone, Essence, The Guardian, Mic, and more. Follow him on Twitter.